Barbara Guerra is Associate Professor at the Department of Biochemistry and Molecular Biology, University of Southern Denmark. She obtained her Ph.D. in Biochemistry and Cell Biology in 1998 from the University of Southern Denmark based on studies on the structure, function and regulation of selected protein kinases. Subsequently, as a postdoc at the same University, she investigated the role of protein phosphorylation in the regulation of intracellular processes. In 2001 as Assistant Professor, she moved to the research group of Jean Y.J. Wang at the University of California-San Diego, USA where she studied the regulation of cell cycle progression and the influence of DNA damaging agents on human cancer cells survival and proliferation. She returned to the University of Southern Denmark in 2003 as Associate Professor carrying on her research activities in the field of cancer cell biology through the support from various Danish foundations and private donations. In 2006, she was awarded a teaching price from the Faculty of Natural Sciences at the University of Southern Denmark for her commitment and engagement. She has supervised more than 60 Bachelor-, Master-, Ph.D. students and postdocs and established numerous national and international collaborations. Since 2010, she is elected member of the Faculty Ph.D. committee and head of the Department Ph.D. committee. Since 2012, she is elected member of the Institute Council and invited member of the editorial board of Oncology Reports.

Barbara Guerra’s scientific work focuses on various research fields that have a specific group of enzymes, i.e. protein kinases, as common denominator. We aim at understanding how protein kinases are regulated and influence intracellular signal transduction pathways linked to various physiological and pathological processes in mammalian cells.
We are mainly interested in deciphering mechanisms of resistance of cancer cells controlled by this class of enzymes and finding novel and effective small molecule compounds able to block their activity.
We focus on the dynamics of DNA damage sensing and repair and the role of protein phosphorylation in mediating and controlling these processes.
In a more physiological setting, we study how protein kinases contribute to redox homeostasis and confer protection against oxidative stress. 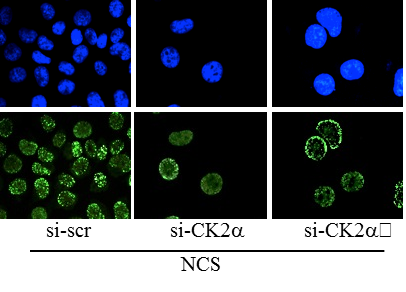 Protein kinases-mediated regulation of DNA double-strand breaks sensing and repairCell cycle progression is tightly regulated by a plethora of proteins that act in order to preserve the integrity of the genetic information to be transferred to daughter cells. A wide variety of DNA lesions leads to activation of various cell cycle checkpoints controlled by specific protein kinases that play an important role in the preservation of genomic integrity. Two major repair pathways are activated in the presence of DNA double-strand breaks (DSBs), i.e. homologous recombination (HR) and non-homologous end-joining (NHEJ). Studies on mammalian cells have revealed that one of the earliest events occurring upon induction of DSBs is the activation of ATM (ataxia-telangiectasia mutated) protein kinase whose downstream targets (e.g. 53BP1, MDC1, BRCA1) assembly to sites of DSBs promoting repairing of the DNA. We have recently identified novel components of this complex machinery and demonstrated that protein kinase CK2 is necessary for proper assembly of 53BP1 to sites of DNA damage induced by radiomimetic drugs. 53BP1 has been shown to be required for efficient ATM autophosphorylation and recruitment of its substrate, we propose that CK2 contributes to activation of the ATM-mediated signaling pathway by promoting accumulation of 53BP1 to sites of DNA break. This and other observations have formed the basis of current research in the laboratory aiming ad adding further knowledge to the complex choreography of events that regulate the spatial and temporal re-localization of DNA damage-related proteins.

Exploring mechanisms of resistance to treatment of human pancreatic cancer cells
Pancreatic cancer is one of the most aggressive human solid tumors representing one of the leading cause of cancer-related death in developed countries. Current treatment regimens are still not effective being associated with a median survival of ~6 months. Many novel targeted agents, among others Gemcitabine, have been investigated in clinical trials but the overall conclusion is that this agent has failed to significantly improve the outcome in patients with this disease. The molecular pathogenesis of pancreatic cancer involves the occurrence of genetic mutations and the activation/inhibition of intracellular signal transduction pathways that are still poorly understood. In collaboration with colleagues at OUH, we are investigating the role of selected pro-survival protein kinases in the etiology of human pancreatic cancer and verifying whether tumor growth and proliferation correlate with their deregulated expression and activity. Although Gemcitabine treatment continues to be the standard procedure for pancreatic cancer, there is increasing evidence that a combination approach to block simultaneously several survival signaling pathways would greatly enhance the efficacy of the aforementioned agent. In this respect, we are currently investigating whether the knock down or inhibition of selected protein kinases would decrease the resistance of pancreatic cancer following treatment with Gemcitabine. Our aim is ultimately to provide i) a better understanding of the complex molecular pathways that are involved in the development of pancreatic cancer and ii) the basis for improved treatment of this deadly disease. 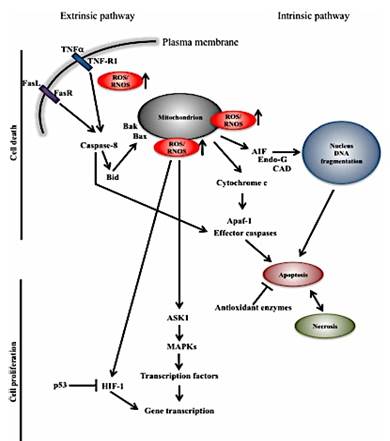 Role of protein kinases in protecting cardiomyoblasts from oxidative stress
Under physiological conditions, cells maintain redox balance through the generation and elimination of reactive oxygen/nitrogen species (ROS/RNS). Both exogenous and endogenous sources contribute to the formation of these highly reactive molecules that are promptly processed through enzymatic and non-enzymatic systems so to maintain cellular homeostasis. The heart consumes a significant amount of oxygen and it is particularly exposed to oxidative stress which is believed to be responsible for the pathogenesis of cardiac dysfunctions. Current studies on oxidative stress focus mainly on ROS as signaling molecules (i.e. second messengers) and the modifications that they induce on intracellular signaling pathways and gene expression. However, the molecular mechanisms controlling oxidative enzymes expression levels and function are still largely unexplored and, thus, a promising research ground. We have recently reported evidence that down-regulation of selected protein kinases by RNA interference results in the accumulation of mitochondrial superoxide suggesting that these enzymes may provide protection against oxidative stress by controlling ROS scavenging enzymes. Currently, we are (i) exploring the physiological consequences of ROS accumulation, (ii) identifying molecular mechanisms controlling scavenger enzymes expression and activity and (iii) performing a global analysis of gene expression modification in response to elevated levels of ROS. The acquisition of new knowledge will be relevant in the development of new therapeutic strategies in combating ROS-mediated cellular abnormalities.

A full list of publications by associate professor Barbara Guerra can be found here.