Three engineering students from SDU have decided to make concrete more climate friendly. During the production of concrete, large amounts of CO2 are released, so the students have developed an idea for a hybrid furnace which utilises the excess energy produced by wind turbines. The idea is so good that it won an international competition.

Concrete is the material of choice when it comes to building houses and bridges. But it is also one of the building materials that weighs heaviest in terms of CO2 costs.

Three engineering students of Structural Engineering at SDU have used their free time on developing their idea for a hybrid furnace, which will make concrete a more environmentally friendly product.

- Concrete consists mainly of cement, water and gravel. Cement is produced by heating sand and chalk all the way up to 1500 degrees Celsius in large furnaces. Around 40% of the CO2 released in the production of cement is caused by the heating process in which the furnaces are heated using natural gas, explains Frederik Autrup, who devised the furnace along with his fellow students Rasmus Overgaard Stæhr and Rasmus Møller Thomsen. 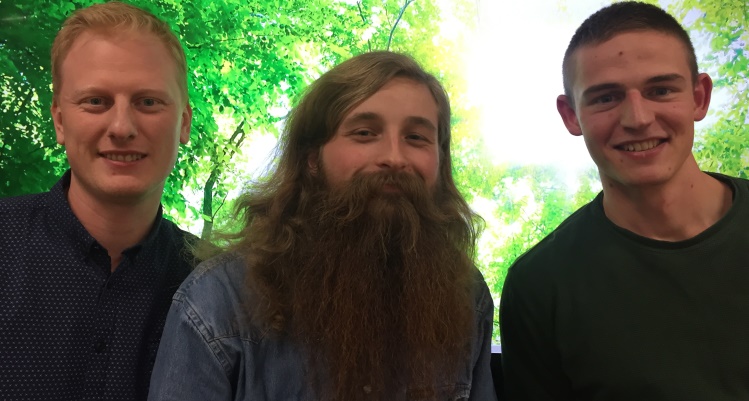 The green think tank CONCITO estimates that the production of concrete represents 8-10% of the total global emissions of greenhouse gas. The production and use of concrete for construction and plant releases almost as much as the consumption of electricity and heating in all private housing in the world.

- The producers of cement typically use gas furnaces, but by adding an electric heating element to the furnaces they can also use electricity. By building in electrodes, we can make the furnaces automatically switch to green energy when excess power is produced by sources such as wind turbines, and then switch back when there is no wind, says Rasmus Møller Thomsen.

- In the long term, the plan is to phase out the consumption of natural gas during production, he adds.

The hybrid furnace is such a good idea that the three engineering students have won the final in the international competition Sustainable COncrete COnstruction Design, organised by the Delft University of Technology in the Netherlands. The idea was presented to the world's leading concrete researchers at the confrerence fib symposium 2017, and the jury agreed that first place should be awarded to the Danish team's idea.

- A lot of research is being done on environmentally friendly alternatives to concrete, but developers are reluctant to use them. Nobody wants to experiment with building a Great Belt Bridge using new types of concrete, says Rasmus Overgaard Stæhr.

In deference to coming up with green solutions for a sector not keen on experimentation, the three engineering students carefully investigated where the largest environmental problems lie in current production methods.