Internationally acclaimed sports researcher Peter Krustrup is to take up a position with the University of Southern Denmark’s Department of Sports Science and Clinical Biomechanics. He will be Professor of Sport and Health Sciences and head of research in the new Sport and Health Sciences research unit. Peter Krustrup will become part of the university’s strategy on football research, where he will strengthen the research within both elite football and football in a public health perspective.

Peter Krustrup, one of Europe’s leading experts in training, testing and analysis of training and football matches, will assume a professorship at the University of Southern Denmark with this as his core area. 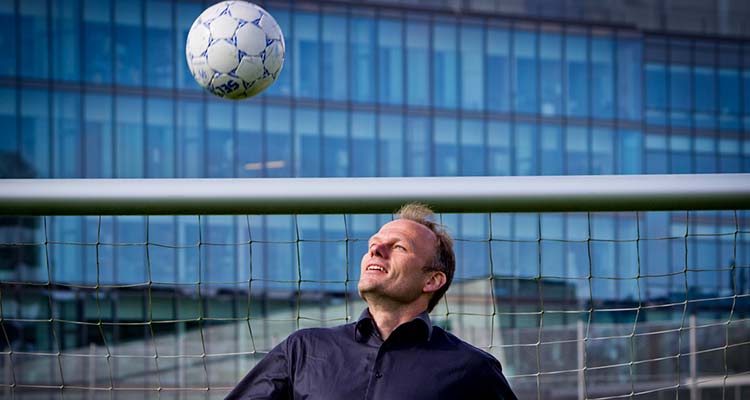 The majority of Peter Krustrup’s research has been within football and related ball games, where, among other things, he has developed, evidence-based and implemented the training concepts Football Fitness, FC Prostate and FIFA 11 for Health in Europe. In the past 10 years, he has worked closely with sports organisations such as FIFA, UEFA, the Danish Football Association, and the National Olympic Committee and Sports Confederation of Denmark. Currently, he and his PhD students are carrying out studies at more than 200 schools in Denmark and 14 schools in the Faroes, all of which have implemented health education on the football pitch as part of the FIFA 11 for Health project.

Peter Krustrup comes from a professorship at the University of Copenhagen and, prior to that, a professorship at the University of Exeter, UK. Since 1996, he has conducted research in the field of elite sporting performance. He has also spent much of his career researching and spotlighting football as a means of promoting health and preventing and treating lifestyle diseases throughout the life course – in both men and women. He is also running projects within football as rehabilitation for men with prostate cancer and women with breast cancer.

Since 2003, Peter Krustrup has lectured in physiology and football. He is currently taking UEFA’s highest coaching qualification, the Pro Licence, and was assistant coach to the Danish women’s football team that won bronze at the 2013 European Championships in Sweden. He is also an editor of the British Journal of Sports Medicine and the European Journal of Applied Physiology as well as an honorary visiting professor at the University of Exeter.

Peter Krustrup is also an outstanding communicator in his field of research, making him a highly sought-after speaker both nationally and internationally. He has given interviews to a number of large international television broadcasters, including the BBC, CNN and CBS. He has also been eminent at bringing his research results to application.

Peter Krustrup has received numerous awards for his scientific work, including the Danish Football Association’s “Part of something bigger” award in 2014 and the Men’s Health Award 2010. He was also co-organiser of the WCSF 2015 World Congress on Science and Football and the Copenhagen Consensus Conference 2016: children, youth and physical activity.
Peter Krustrup attained a master’s in sport sciences in 1999 and a PhD in exercise physiology in 2004, both at the University of Copenhagen.

Peter Krustrup has published more than 200 peer-reviewed articles in the period 2000-2016, including 60 in the past two years alone. His articles have been cited more than 7,000 times. He has also written more than 100 sports-related articles for Danish and international sports magazines and 10 chapters for various international book publications.

Peter Krustrup will take up his new position on 1 October 2016 and give his inaugural lecture on Friday 27 January 2017.