New study shows that people are sceptical of drones intruding into their private sphere.

Drones can take inappropriate pictures or intercept personal information. And they can fly very close to people's private property and privacy.

These are some of the concerns people have about more drones in the air.

- Drones with cameras are the cause of most concern, but of course depending on whether the drones fly high up in the air or stop and hover over a person. It is also clear that landowners are unsure about how much of the airspace they own, says Domen Bajde, associate professor at the Department of Marketing & Management at the University of Southern Denmark.

He has been in charge of a focus group study whose aim is to provide insight into the public's knowledge of and attitudes towards drones. The survey has been conducted in collaboration with researchers from the University of Southern Denmark, Aalborg University and the Danish Transport, Construction and Housing Authority.

More tolerant towards children
The study shows that it also matters who controls a drone. The participants in the study have great confidence in public institutions and private companies that use drones for professional purposes. But when it comes to private individuals, the participants distinguish between children and adults.

- People are more tolerant towards children. They don’t expect children to have any hidden agendas and expect that parents will supervise their children to ensure they use the drones responsibly. On the other hand, there is greater scepticism as to whether adult amateur users abide by the rules for private drone flight, says Domen Bajde. 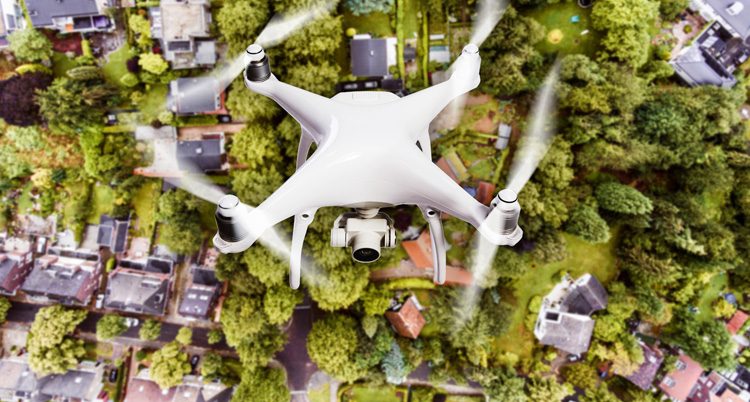 Drones are still a new technology of which many Danes primarily get their knowledge about from the media and films. Therefore, incorrect assumptions arise about drones, according to Domen Bajde – for instance that they are always controlled by a person, though a drone can be programmed.

This type of drone use is called autonomous flight and requires a special authorisation from the authorities. Danish authorities have not yet given any authorisations of this kind.

A lack of knowledge about the activity of drones
Another issue is that it is difficult to assess what a drone is doing simply by looking at a flying drone.

- The majority of the population do not know much about drones. People get anxious if they don't know who is flying a drone, why it is flying there and what the purpose is. There are examples where people have contacted the police about flying drones, so there is a need for better knowledge and information systems to help people understand what a drone is doing, the researcher concludes.

The SDU UAS Center and the Danish Transport, Construction and Housing Authority are collaborating on another project to develop electronic number plates for the drones, so that it will be possible to identify the drones with an app.

- The purpose of the drone number plates is to address the concerns people have. Therefore, it is of great value to us to obtain concrete knowledge about what people think about drones in the public space, says Kjeld Jensen, who is an associate professor at the SDU UAS Center and in charge of the project on drone number plates (in Danish).

Further studies in the pipeline
Head of office Michael Dela at the Danish Transport, Construction and Housing Authority, says about the study of the public's views on drones:

- The knowledge the new SDU/AAU study provides gives us a much more qualified basis on which to organise additional tests and studies of drones and ordinary citizens' experiences. And as far as we know, this study is the first of its kind in the world to really shed light on the use of drones seen from the citizens' point of view. This is actually something to be proud of, says Michael Dela.

Among the themes which the Danish Transport, Construction and Housing Authority envisions to be investigated further in upcoming studies is the use of the so-called micro drones –  small drones – in urban areas as well as several aspects of the professional drone flight in the cities.

The report "General Public's Privacy Concerns Regarding Drone Use in Residential and Public Areas" is available here.

About the project
Focus group surveys have been conducted in three major cities: Aalborg, Copenhagen and Odense. The study focuses on micro drones weighing less than 250 grams, so the concerns have not been about safety conditions if a drone drops to the ground.

Behind the project, which is conducted in collaboration with the Danish Transport, Construction and Housing Authority, are Associate Professor Domen Bajde and Research Assistant Jannek K. Sommer, both from the Department of Marketing & Management at the University of Southern Denmark, and Associate Professor Maja Hojer Bruun from the Department of Learning and Philosophy and Assistant Professor Karen Waltorp from the School of Culture and Society, both from Aalborg University.

In 2016, the Danish parliament adopted a new law which establishes new rules for flight with drones. Thus, Denmark was among the first countries in the world to introduce legislation that applies to the use of drones. In the reading of the bill, the parliament emphasised that drone technology is developing very quickly and can contribute to growth in society. At the same time, a broad political majority wants to ensure that drones do not violate people's privacy. The then Minister for Transport and Building therefore decided that the relationship between, on the one hand, the use of drones and, on the other hand, privacy should be clarified further in order to ensure a more informed basis for future adjustments of the rules.

Back to News from the Faculty