Jellyfish are found everywhere from the polar regions to tropical waters. GoJelly is an international research project, which will explore jellyfish properties to be used to clean seawater for microplastic and served as feed and food, anti-aging cream or fertilizers.

Jellyfish are found all over the sea from the deep sea to sea surface and from polar to tropical regions. They have no brain or heart and can seem innocent, but more people consider them to be burdensome.

It is not only bathers on the Danish beaches that find them inconvenient, but many industries can suffer from economic damages that jellyfish bloom can cause.

Jellyfish fill the oceans and are nuisance to bathers, fishing and the marine environment. Bathers are bothered by the mere presence and a meeting with a lion’s mane jellyfish can end up painful. Fishermen get the jellyfish in their nets, and the marine environment is influenced by the fishermen's intake of fish fry, fish eggs and zooplankton. There have even also been several cases where Swedish power plants had to shut down because jellyfish blocked the water pipes that form part of the cooling system.

Assistant Professor, Jamileh Javidpour, from the Department of Biology, has been working with jellyfish for the past 15 years. She is now studying on how to use jellyfish biomass constructively to remove microplastics from the oceans and at the same time kick off both economy and entrepreneurship.

In Denmark there are different types of jellyfish, and some of them are invasive. This means that they are not found naturally in Danish waters, but instead they have come here with the ocean current or ships.

Jellyfish belong to the healthy aquatic ecosystems and survived millions of years during the earth’s history. However, under anthropogenic pressures such as overfishing and degradation of marine systems they became nuisance. 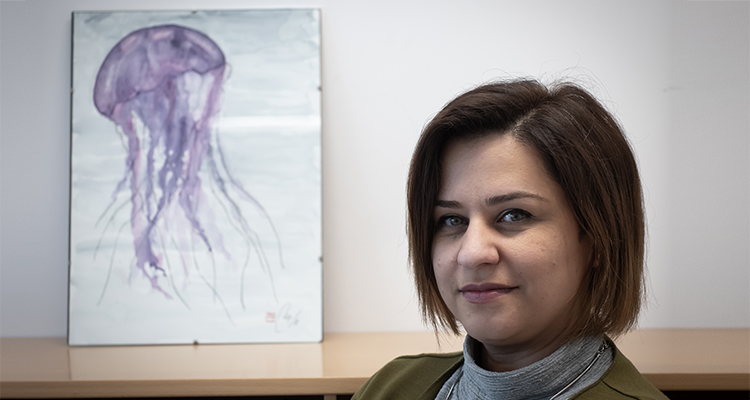 “On one hand, jellyfish represent an impressive stock of organisms and biomass with very little human exploitation at a global scale. On the other hand, increasing amount of jellyfish biomass could be considered as a valuable novel resource”, says Javidpour.

Emit mucus in the sea

When jellyfish reproduce or get stressed, mucus emits into the surrounding sea water. The emitted mucus has the useful property that it binds to microplastic.

Jellyfish mucus (so called slime) was previously shown to enable capturing of nano particles, but also being an enzyme and microorganism rich scaffold in nature.

The theory is that the mucus can be actively used to remove microplastic, for instance by being included in filters.

From nuisance to resource

In addition, Jellyfish itself can be used for several different types of products, from wrinkle cream to snacks and fertilizers for use in agriculture.

“GoJelly is going to be innovative, turning a nuisance to a valuable product, but we should not forget the natural role of gelatinous organism for on marine ecosystem”, says Javidpour.

That is why a group of scientists from Denmark, Norway, Germany, Slovenia and Israel will collect data on both fish and jellyfish to understand interactions between these two players of marine food webs.

Kerteminde will house a larger farm of jellyfish, where Javidpour will breed the jellyfish for research use.

Here she will examine the possibility of using the jellyfish commercially.

The construction of jellyfish farm is under development, and it is expected to be ready for use in research after the summer.

GoJelly started in January 2018 and runs until December 2021. SDU has become the coordinator since March 1, 2019 and will continue in this role until the project expires.

The project partners are found on the GoJelly home page.