Researchers reinterpret Danish economic history, which goes further back than the transformation of Danish agriculture in the 1880s. The conclusion is that German speaking estate owners laid the basis for the cooperative movement in the late 18th century.

Denmark's first cooperative dairy was founded in 1882, and the cooperative movement spread to the whole country by 1890. But how did this evolution come about? And why did it happen in Denmark and not in other countries in the same way?

To find the answers, Paul Sharp, SDU professor and economic historian, and Markus Lampe from the Vienna University of Economics and Business studied how agriculture has evolved over time.

The study shows that part of the story of the modernisation of agriculture is due to some visionary estate owners moving to Denmark from Germany in the late 18th century.

New ideas and techniques from abroad

- More than 100 years before the cooperative movement, a transfer of knowledge from abroad took place, where newcomers from, for example, Schleswig and Holstein came to Denmark, says Paul Sharp and continues:

- It was in particular estate owners and big landowners who came from a well-developed agricultural sector. They brought new ideas and techniques with them, which spread rapidly across Denmark.

- Our research shows that the areas that subsequently evolved the most in relation to modern dairy farming in the 1880s are the regions where the estate owners had settled 100 years earlier. It was therefore German and often noble people who started the development in Denmark, says Paul Sharp.

The SDU professor is aware that this is a different story than the one taught in history class and which is playing an important role in Danish self-image.

- But it is important to look back in time in order to understand why some countries are rich and other countries are poor today, he points out.

- And when we understand how Denmark has become a rich country, the research also contributes to our understanding of why there is so much inequality between the countries in the world today, says the researcher.

Farmers were open to new knowledge

One of the reasons why ideas and methods gained ground is that the population was very open and receptive to new things, including the new arrivals as well as the new technologies and farming methods.

Agriculture had been very conservative up until this time, but the enlightenment bore fruit at an early stage in Danish agriculture compared to many other places. This is because the estate owners introduced a scientific way of thinking about agriculture, explains Paul Sharp:

- The estate owners established places of learning in their manor houses, where the small, independent farmers learned how to keep accounts, make farming more productive and so on. When an improved technique or new machine arrived, the estate owners tested them and wrote and published articles about their experiences, he says.

The researchers have highlighted some of the results from the research project in the book “A Land of Milk and Butter: How Elites Created the Modern Danish Dairy Industry”, which has been published in English by University of Chicago Press. The book is currently being translated into Danish.

Read more about the book.

The development occurred simultaneously at universities and agricultural schools, which meant that educational opportunities, periodicals for agricultural science and well-tested technology were in place by 1882.

The farmers could therefore draw on this knowledge and experience when they had the opportunity to come together in dairy cooperatives during the 1880s.

- It proved to be crucial that those things had fallen into place, says Paul Sharp.

The concept of cooperatives did not help developing countries

- Before and, above all, after the second world war, attempts were made to transfer the idea of the cooperative movement to many developing countries, e.g. to countries such as India, where there were also many farmers and cows. But this did not create the same growth and development.

- We believe that this was due to the absence of the basic and educational prerequisites, which were present in Denmark. For although the cooperative movement was important, significant changes had taken place beforehand, concludes the professor.

Paul Sharp and his colleague Markus Lampe (WU Vienna University of Economics and Business) have gathered some of the results from the study in the book “A Land of Milk and Butter: How Elites Created the Modern Danish Dairy Industry”, which has just been published.

Come to the book launch

Meet the authors and learn more about the book when SDU invites you to the book launch on Wednesday, 15 May from 1:30-2:00 pm at Panoramaudsigten (Panorama View) at Campustorvet.
The internationally recognised professor of economic history Joel Mokyr will be present to give a brief introduction to the book, after which Paul Sharp and Markus Lampe will talk more about the results.
The book launch will take place in continuation of a D-IAS lecture with Joel Mokyr. The lecture is entitled “Is Technological Progress a Thing of the Past?” and will take place from 12:15-1:15 pm in O100.
Everyone is welcome to attend both events.

You can read more about this on D-IAS’ website . 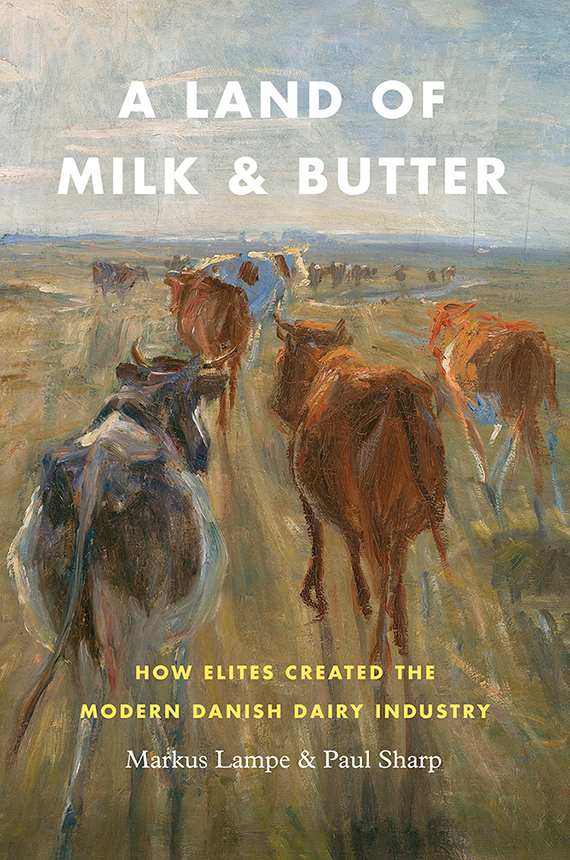 Paul Sharp is a professor at the Department of Business and Economics. He researches economic history, globalisation in the 19th century, pre-industrial economic growth and the development of the Danish dairy industry. In 2016, he received DKK 5.9 million from the Sapere Aude programme DFF head of research (Independent Research Fund Denmark) for the research project "Rethinking the economic take-off of Denmark".