The world is full of luminous animals

Deep-sea researchers report that all the animals analysed from their dive have the ability to glow. Luminous organisms are more common than we think – also in Denmark.

Colorfully luminous fish, squid, jellyfish, crustaceans, sharks, sea slugs, corals, sea anemones, worms, fungi and insects; the world is full of animals and organisms capable of producing and emitting light in the dark; they are bioluminescent.

Most of them produce green or blue light, but some, such as certain worms, appear yellow, and some fish species light up in red.

– They each have a reason to glow in exactly their way. It is a form of communication, though often the purpose is to scare off predators or lure prey, says postdoc Warren Francis, a biologist at University of Southern Denmark.

I think there are many more bioluminescent animals than we know today – especially in the deep sea, where it can be an important form of communication in a totally dark world.

Recently, he and colleagues from the Monterey Bay Aquarium Research Institute (MBARI) in the United States have studied a number of deep-sea animals, and surprisingly found that all 10 species studied were bioluminescent.

– I think there are many more bioluminescent animals than we know today – especially in the deep sea, where it can be an important form of communication in a totally dark world, says Warren Francis.

In the deep sea, bioluminescence is often seen in animals that cannot move, at least not very quickly; corals, sea pens, sea anemones, jellyfish and the like. 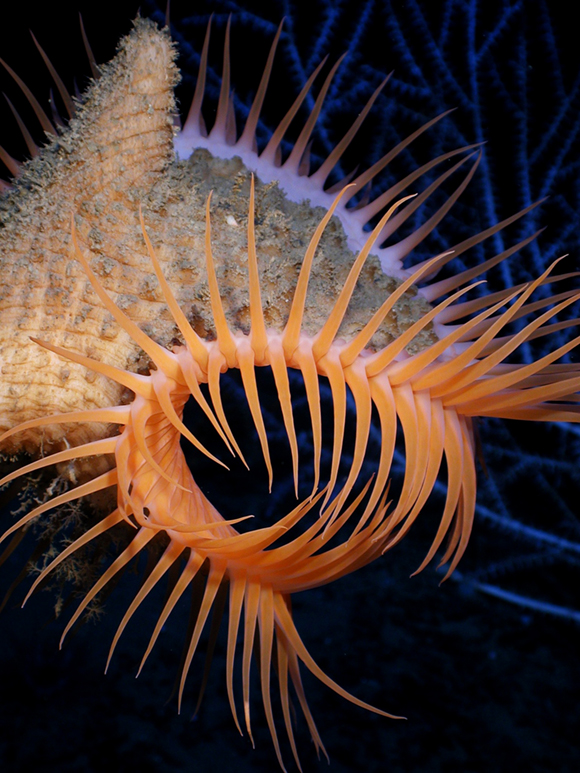 – These animals have no chance of escaping when a predator discovers them and starts eating them. They probably use the light to scare off their attackers. Sometimes they also produce a luminous slime, which they spew out over their attacker, thus marking the attacker as a visible and easy prey for even larger predators, he explains.

The ocean’s predators can also be luminescent, probably to attract prey – a technique used by many fish.

Luminous animals are also found in Danish waters. In the North Sea and Skagerrak, for example, four relatives of the species that were studied by scientists in the depths off California: the coral Isidella lofotensis and the sea pens Pennatula phosphorea, Funiculina quadrangularis and Kophobelemnon stelliferum.

Their relatives off California have each developed their own light show, which the researchers could see with their own eyes on their diving trip to the dark ocean deep:

Funiculina sp. emitted blue light when the divers touched their stalk and polyps and thus disturbed them. And Kophobelemnon sp., which was collected at 4000 m depth, turned out to have some distinct, green-lit spots between its tentacles.

In addition to these corals and sea pens, we also find in Danish waters a large number of small luminescent jellyfish that live in the surface water; Aequorea vitrina, Beroe Cucumis, Beroe ovata, Bolinopsis infundibulum and the invasive Mnemiopsis leidyi.

50 pairs of legs and glowing

The surface itself is inhabited by luminescent algae like the dinoflagellates, which emit blue flashes when disturbed – for instance when a boat or hand slips through the water.

There are also luminescent animals on land, but this part of the animal kingdom is not very well studied, so we do not know much about them. An example is the centipede Geophilus carpophagus, a brown-orange centipede up to 6 cm long with 51-57 pairs of legs. It is rare but is seen from time to time in Denmark and other parts of Europe.

The common glowworm (Lampyris noctiluca) – which is neither a worm nor a fly, but a beetle – also lives in Denmark, and especially in May and June, but also in late summer, they emit their characteristic flashing yellow-green light. The light is produced by females and the purpose is not to scare predators away but to attract males. They prefer to engage in this activity on balmy evenings, and this usually takes place for a few hours around midnight.

In fact, one of them forms the basis of one of the most widely used techniques used in laboratories today and has thus gone from being a biological curiosity to the cornerstone of a billion-dollar industry.

This shift began in 1961 when Japanese marine biologist and chemist Osamu Shimomura came to Princeton University in the United States and spent his first summer collecting large quantities of the small luminous jellyfish Aequorea victoria in the Puget Sound, in the north-west corner of the United States.

In the following decade, Osamu Shimomura succeeded in extracting the protein from Aequorea victoria, which is responsible for making the jellyfish glow green. The idea of using this protein in biomedical research was born: Would it be possible to add it to cells or bacteria in the laboratory and make it light up when a specific gene in the experiment was expressed?

Yes, it was indeed possible, and when a co-responsible gene was identified 30 years later, biomarking with this green protein and gene became one of the most important tools in biomedical research to investigate whether micro-level chemical reactions actually turn out, as one’s hypothesis predicts.

It is simply determined by seeing if the cell or bacterium you are experimenting with turns green or not.

GFP has revolutionized biomedical research and is enormously valuable, but it also has its limitations. So, it is interesting to look for other bioluminescence systems from other luminescent animals.

It is also thanks to GFP that researchers today can observe various biological processes by following the green light – for example, how nerve cells are developed in the brain and how cancer cells spread.

The protein/gene is today collectively called Green Fluorescent Protein (GFP), and in 2008 it led to the Nobel Prize to Osamu Shimomura and two colleagues for their work.

– GFP has revolutionized biomedical research and is enormously valuable, but it also has its limitations. So, it is interesting to look for other bioluminescence systems from other luminescent animals, says Warren Francis. 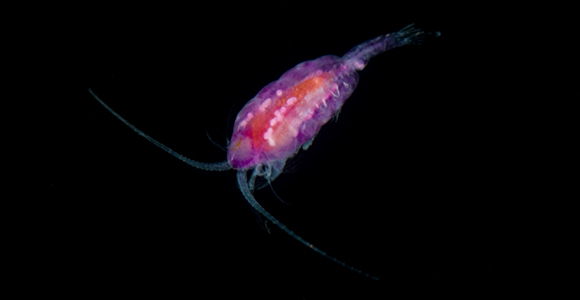 Next step in bioluminescence science

A limitation of GFP is that you need an external light source, usually a laser beam, to be able to see its green light. Another is that it is a very stable molecule, so once activated, it cannot turn off again.

Warren Francis is in the process of analyzing the DNA of the collected corals and sea pens to look for the genes responsible for the animals’ luminescent chemical substances. This is done in collaboration with colleagues Steve Haddock and Manabu Bessho-Uehara, who also helped find and film the animals examined off California.

– The ultimate goal is to find new alternatives to GFP. But this is close to being an unexplored area, and science has only just begun to explore it. For example, we still have no idea at all what protein is at work in the luminescent sea anemone that we collected. It is clearly completely different from that in the corals. It will be very exciting to dive deeper into this, he says.

Top picture: Bioluminescent ‘blooms’ occur when algae like the dinoflagellates emit blue flashes. They typically do this when disturbed, for example when a boat or hand slips through the water. Photo: Ritzau Scanpix

How do the animals do it?

Different groups of animals have different luciferins, though different luciferase families may use the same luciferin. All studied systems share a need for oxygen at some step, though some make use of other factors like calcium or Adenosine triphosphate.

Warren Francis is a postdoc in the Department of Biology He works on a mix of bioinformatics, biochemistry and evolutionary biology.