Robots are to be equipped with artificial animal brain

Robot researchers from SDU are developing a nervous system inspired by animals for robots. The artificial brain will enable robots to go, adapt, and make decisions. The robots will even be able to learn new skills like dogs through reward.

Typical robots move or move in predetermined rhythms or routes. If they face unknown situations or are asked to find their way, they are lost.

But now, roboticists at SDU have ambitions to equip bio-inspired walking robots with an overall brain so robots can find their way, climb, plan and make their own decisions.

- Based on biological investigations, we are developing an artificial brain for robots. The brain basically acts as a general and flexible controller or “smart motor control software” that equips the robot with the ability to master more skills at the same time. It could be that the robot could walk and push or transport an object along using its legs as well as find its way, says Associate Professor Poramate Manoonpong from SDU Embodied Systems for Robotics and Learning, and continues:

- Each of the robot's legs will be controlled by the brain with force feedback. A system that constantly reports back if there are problems in the terrain or if the robot's leg breaks. Then a signal is sent and the overriding brain can make adjustments according to the conditions so that the robot can continue. 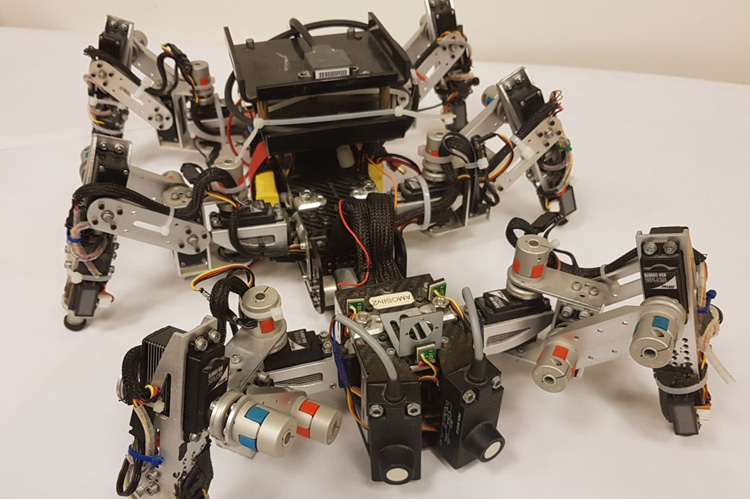 Poramate Manoonpong has previously developed a robot inspired by insects. With its six legs it can climb steep inclines, but now the roboticists will equip the robot with an artificial brain, so that it will also be able to carry out more complex actions.

- We have recently achieved our first step. A small brain that can adapt to different leg systems like different sizes, weights, and motors. The brain can control the movements of the legs and quickly adapt to the movements to deal with differently situations, like low energy, to complete their mission, explains Poramate Manoonpong.

Along the project the roboticists are going to apply the developed smart motor control software to other robot platforms, for instance, a gecko robot, which has been developed by the Institute of Bio-Inspired Structure and Surface Engineering in China.

By using smart engine software, the robot, like a gecko, will effectively and adaptively climb on walls and ceilings. This will make the robot ideal for working in spacecraft with microgravity.

Robots to learn by reward

The roboticists have designed the artificial brain so it also has a module or center where it can learn new skills without being pre-programmed. Robot simply learns like a dog. Through reward.

- We are inspired by the way animals learn. For instance, we can program the robot to like light. Just as a dog is rewarded with treats, we can reward the robot with light. If it goes the right way, it will become brighter. If it goes the wrong way or falls over, the light will be taken away from it, says Poramate Manoonpong.

Poramate Manoonpong is associate professor at the Maersk Mc-Kinney Moller Institute. His research area is artificial intelligence, and he is affiliated with SDU Embodied Systems for Robotics and Learning.

The project is called NEUrorobotic Technology for Advanced Robot Motor Control and has received DKK 5.7 million from the Young 1000 Talents Program in China. It will be led by Poramate Manoonpong and will be carried out at Embodied AI and Neurorobotics Lab at the University of Southern Denmark and the Institute of Bio-inspired Structure and Surface Engineering at Nanjing University of Aeronautics and Astronautics in China.