New study shows that peach-fronted conures have a surprisingly advanced talent for collaboration when it comes to finding food. This is important knowledge for biologists working with conservation of wild bird populations.

It is well known that certain mammals and birds live in groups and help each other find food, care for the young, hunt or keep watch.

Now, in a first, a new study describes that a parrot species – the peach-fronted conure - is capable of a very sophisticated form of collaboration: These birds are somehow able to solve a task together with a partner that they can't see.

- It is, as far as we know, the first time this is observed in any animal; a task solved by two individuals who cannot see each other. This reveals how advanced birds can be, says Sara Torres Ortiz, who has studied animal cognition at University of Southern Denmark.

Important for the survival of parrots

- This teaches us that parrot species in the wild can be expected to work together and that their advanced group dynamics are important for their survival. That is relevant knowledge for biologists working with conservation and improvement of their living conditions, she says. 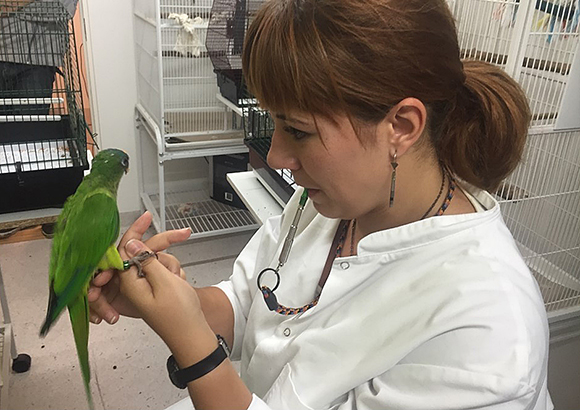 Rooks and ravens are not as clever

The task solved by the peach-fronted conures is based on a traditional method of testing cognitive abilities of birds: Two birds are presented with each end of a string, which - if pulled at the same time – will release a snack. If the birds do not pull the string simultaneously, no snack is released.

This test has successfully been solved by a number of birds, including ravens, rooks, African grey parrots and New Caledonian crows, but that is the limit of their capabilities.

In this case, the research team worked with four peach-fronted conures, presented them with more and more complex collaboration tasks - and observed their surprising talents for solving the tasks.

How do they do it?

In the most difficult experiment, the researchers first placed a bird in the test box where it could see its own end of the string. Then they waited a little and let in the second bird behind a wall; thus invisible to the first bird. Now the two birds had to figure out how to pull both ends of the string to get a snack. - They were generally good at solving the task and only started pulling when both were present and ready. But we do not know exactly how they did it. Our recordings revealed that they produced more vocalizations when they couldn't see their partner, so maybe they exchanged information that way, says Sara Torres Ortiz.

A peach fronted conure waits for its invisible partner to arrive, before they pull each their end of the string simultaneously and get rewarded with a snack each. Credit: SDU.

The most difficult task

The birds also seemed to have individual approaches to the task. One bird immediately grabbed its end of the string, but then let it go and only picked it up it again when its partner began pulling the other end of the string. Another bird picked up the string and waited for it to be pulled by the partner.

The four parrots were coupled in 12 different couple combinations and they solved most of the different tests. However, when they got to the fourth and most difficult test, only five out of 12 couples managed to solve more than 40 % of the tasks.

- Being able to wait for a partner 40 pct. of the time is quite impressive. Other birds like African grey parrots, rooks, ravens and New Caledonia crows are not able to wait at all, even when they can see their partner, comments Sara Torres Ortiz.

The researchers recorded the vocalizations of the birds while they collaborated and next step is to analyze these recordings to see if they reflect some kind of communication between the birds.

Sara Torres Ortiz is a biologist and ph.d. student interested in animal cognition. While at SDU, she worked with harbor porpoises and conures. Email: sara.torresortiz@gmail.com. Phone: + 45 50375833.

The ground-living kea may not be able to collaborate with an invisible partner, but it is still a clever bird. It, too, understands that it needs to wait for a partner before it starts pulling the string. But only when the partner is visible.