Sea wrack on the beach: Disgusting or valuable?

Insulation, fertilizer and animal feed: For centuries, humans have been using sea wrack and washed-up eelgrass on the beach in a myriad of ways that also make sense today, scientists say and call for better utilisation.

It doesn't take much windy weather before sea wrack is washed ashore. And it doesn’t take many complaints from bathers before the council sends an excavator to remove the slimy piles of wrack before they start to rot and smell bad.

– Naturally, it makes perfect sense to keep the popular beaches clean of wrack, but we would like to inspire the country's beach municipalities to consider what should happen to the removed wrack, as it represents a potentially great value, says biologist Cintia Organo Quintana of the University of Southern Denmark (SDU).

She represents SDU in the CONTRA project, where a number of Baltic countries have come together to explore the values of sea wrack.

Historically, sea wrack has played a major economic role in those parts of the world that had a lot of it. At our latitudes, entire coastal communities on the North Sea and the Baltic have been dependent on this source of income. Locally, the wrack was used to make roofs and build dikes, and if it was sufficiently fresh, it went into the soup pot or animal feeding troughs.

When large quantities were collected and dried, the wrack became an export product: It was pressed into bales and exported to other parts of Europe, where it was used in mattress production or as packaging to cushion fragile shipments.

During World War I, all of the sea wrack gathered in Germany was seized in order to produce sleeping bags for the soldiers. Wrack was also – and still is – used to make the gelling agent agar-agar, which is used in place of leaf gelatine or food thickening agents.

– The wrack can be utilised in lots of ways, even today, says Cintia Organo Quintana.

For us, it's about sustainability: Being able to keep our beaches attractive to the guests while putting the wrack to good use.

One of the project’s partners, Køge Municipality, is all too familiar with the challenges of sea wrack on the beaches. The Municipality has a long stretch of coastline with beaches that attract guests from the metropolitan area, and during the season the beaches are cleaned every day.

– For us, it’s all about sustainability. We get to keep our beaches attractive to our guests while at the same time putting the wrack to good use, says Project Coordinator Sara Hillbom Guizani of Køge Municipality’s Green Transition team.

As part of the CONTRA project, Køge Municipality will attempt to make a special seaweed compost from the gathered wrack.

– Compost can be used to reduce methane emissions from old landfills. This technology is known as biocover. Bacteria in the compost can convert methane into CO2and water. The impact on the atmosphere is approx. 25 times less than the waste from landfills.

– We want to test if you can use composted sea wrack in a biocover, explains Sara Hillbom Guizani.

Køge Municipality is interested in developing sustainable methods for gathering and sorting sea wrack so that it can be recycled by others – in the same way that the municipality collects and sorts other types of recyclable waste for resale. Køge sees a potential in sea wrack as a sustainable ingredient in everything from compost to insulation.

Challenge in the Baltic Sea

The project focuses on the Baltic Sea, which has a special challenge: The area is very nutritious, which has an adverse impact on animals and plants in the sea due to oxygen depletion and the shading of plants. The overriding problems are nitrogen and phosphorus, as waterways, streams and rivers direct nitrogen and phosphorus from agriculture into the Baltic Sea, where it causes algal blooms.

Ultimately, this leads to oxygen depletion, which causes the fish and meadows of eelgrass to disappear from the shores.

The CONTRA project is funded by the European Regional Development Fund and the Interreg Baltic Sea Region. The participants are authorities, interest organizations, companies and universities from Denmark, Germany, Estonia, Poland, Sweden and Russia. SDU and Køge Municipality participate from Denmark.

The project’s ideas for utilising sea wrack in the Baltic Sea are: 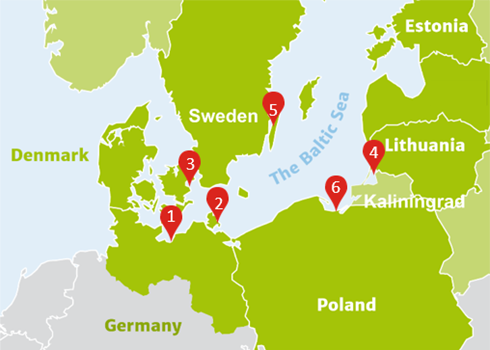 Cintia Organo Quintana is an Assistant Professor at the Department of Biology, where she performs research into nature management, biodiversity and marine biology.

According to Cintia Organo Quintana, the sea wrack contains two different components: Seaweed and eelgrass. They each have their pros and cons:

Wrack
Considerable amounts of bladder wrack, ceramium, sea lettuce and more are washed ashore in coastal areas. Wrack can be used as fertilizer in the fields where it releases important nutrients, especially nitrogen and phosphorus, back into the soil. Studies also show that animal feed containing wrack causes the animals to emit less methane, which is one of the most potent greenhouse gases. Removing wrack from the sea also removes nourishment, and this can be advantageous in areas where the water is too nutritious, e.g. in the Baltic Sea. Wrack can also be used to produce biogas.

Cons: Wrack may contain heavy metals which cannot be included in the animal feed. Another major challenge is removing the sand before the wrack is used for animal feed.

Eelgrass
Eelgrass breaks down slowly and is therefore well-suited for insulating houses and as roofing. It has been used as roofing for centuries, e.g. on the Danish island of Læsø. In Denmark, the company Zostera produces, among other things, insulation batts made from eelgrass.

Cons: Is only washed ashore in large quantities once a year.