Researchers have developed a new antibiotic that can help in the fight against resistant bacteria, and they hope it will reach the patients.

Every day, people die from simple infections even though they have been treated with antibiotics. This is because more and more bacteria have become resistant to the types of antibiotics that doctors can prescribe.

– It’s a huge societal problem and a crisis that we must solve. For example, by developing new antibiotics that can defeat the resistant bacteria, says professor of chemistry at the Department of Physics, Chemistry and Pharmacy, Poul Nielsen.

Resistant bacteria are not only known from pig farms, where it is becoming increasingly difficult to keep the pigsties disease-free. Hospitals are also experiencing with increasing regularity that, for example, infectious diseases cannot be controlled in patients. Thus, an infection in a surgical wound can become life-threatening even if the operation went well.

According to Poul Nielsen, it is important to be at the forefront of the development because the list of resistant bacteria will only grow, which means that the treatment options will be reduced. It is therefore important to develop alternatives that can be used when the current antibiotics no longer work.

– Resistance can occur very quickly, and then it’s essential that we’re ready, he says. 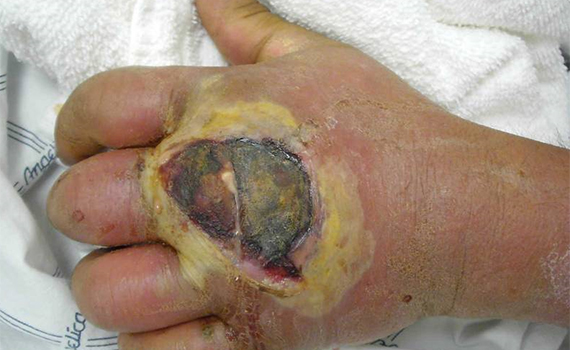 Together with his research assistant Christoffer Heidtmann and Janne Kudsk Klitgaard from the Department of Biochemistry and Molecular Biology as well as Clinical Microbiology, he has developed a substance that has the potential to become a new effective antibiotic, and SDU has now taken out a patent for it.

Unlike traditional antibiotics such as penicillin, sulfonamides and tetracyclines, this antibiotic is from the pleuromutilin class.

The substance is developed in a medicinal chemistry project and recently published in the Journal of Medicinal Chemistry.


Out to doctors and patients – how?

The substance fights both resistant enterococcus, streptococcus and staphylococcus bacteria. The substance and the pleuromutilin class do this via a unique mechanism of action, which also causes resistance to develop at a very slow pace.

So far, the substance has been tested on bacteria and human cells. The next step towards becoming an approved drug is animal studies and then clinical studies in humans.

Maybe we should consider this a societal task, rather than a task that will only be solved if it’s financially attractive.

– If this substance is to reach doctors and patients as a drug, comprehensive and cost-intensive further development efforts are needed, which we can only initiate under the auspices of the university.

– The big pharmaceutical companies have that kind of money, but they are traditionally not interested in this kind of tasks, because they are not financially attractive, says Poul Nielsen.

Should it be a societal task?

According to Poul Nielsen, there are several reasons why it is not financially attractive to develop new antibiotics:

– However, this doesn’t change the fact that the world community is in dire need of new effective drugs against antibiotic resistance. Maybe we should consider this a societal task, rather than a task that will only be solved if it’s financially attractive, says Poul Nielsen.

He and his colleagues hope that the work of further developing their new antibiotic can continue. Whether it will happen, and whether it will be in a public or private context, only time will tell.

Poul Nielsen is a professor of chemistry at the Department of Physics, Chemistry and Pharmacy.

The WHO has presented an action plan to stop the spread of resistance. According to the organisation, we are heading towards a ‘post-antibiotic era, in which common infections and minor injuries can once again kill’.