Efforts work best when multiple actors join forces to reduce food waste, points out SDU researcher Johanna Gollnhofer, who for one week took it upon herself to go dumpster diving.

Food waste is detrimental to the environment, and many initiatives have been taken in recent years to reduce the wasting of food. But which initiatives are backed the most and have the greatest impact? And who is engaged in the fight against food waste?

These questions are being investigated by Johanna Gollnhofer, who is employed at the Department of Marketing & Management. She has followed the movement against food waste in a number of EU countries and has interviewed consumers, retailers, restaurateurs and so-called dumpster divers, among others.

- The initiatives that work best against food waste involve multiple actors simultaneously. Apps like “Too Good To Go” and “Mad skal spises” (Food should be eaten) are examples of solutions that connect consumers with restaurateurs and supermarkets, says Johanna Gollnhofer.

Conversely, the initiatives often fail when there is only one actor behind them. This is because these initiatives are often more extreme, such as people who dumpster dive to find food and the freeganism movement, which focuses on minimising participation in the consumer economy.

- A challenge is the question of who is responsible for food waste? There is a tendency for consumers to, for example, blame retailers and for retailers to lay the blame on consumers or legislators when someone must be held accountable. The joint efforts do away with the problem because they, for example, do not violate the supermarkets’ business model, says Johanna Gollnhofer.

In 2017 there were 247,000 tons of food waste from Danish households, which is 14,000 tons less than in 2011, according to a report from the Danish Environmental Protection Agency. This is in keeping with the fact that we are becoming more aware of the problem, says Johanna Gollnhofer:

Consumers are better informed and have become more driven in the past few years. Voluntary movements and efforts against food waste have particularly become a middle-class activity, so there has been a change in the balance of power, she says.

But retailers are also far more open to new ways of reducing food waste. For example, some supermarkets in Germany, Switzerland and Austria give away food items as they approach their expiry date.

- Although giving goods away without profit is contrary to the supermarkets’ business model, and at the same time it can be perceived as stigmatising to receive free food, the initiative has worked. Customers were at first taken aback by the free food that stood side by side with products for sale. But their focus quickly shifted, and they had to deliberate whether they really needed and would use the free food that would otherwise end up being food waste after a few days, says Johanna Gollnhofer. 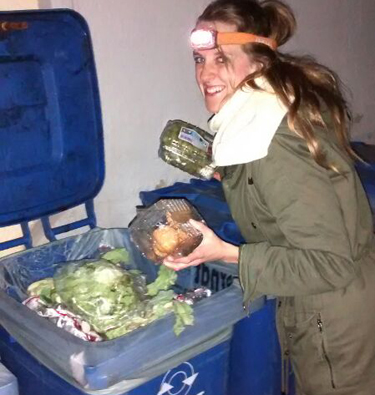 Johanna Gollnhofer was for one week getting by with food from skips at German supermarkets.

The opposite is true for the food that dumpster divers find in, for example, supermarket skips – and that is a major point of contention. The SDU researcher has interviewed both retailers and dumpster divers about their views on the matter.

- Retailers emphasise that they are obliged to throw out the goods and that it is illegal for people to enter their property for dumpster diving. Most retailers wouldn’t answer me as to why they throw out unspoilt food. But some said that it is essential in order to be able to meet consumer expectations that they, for example, can choose between ten bread variants, she says.

The problem is that a lot of food is thrown out which is not spoilt at all. Johanna Gollnhofer experienced this for one week when she was only getting by with the food waste from skips at German supermarkets:

- It soon turned out that I found a lot of fresh goods, and this was everything from pasta to pineapple and beer. You often find so much food that you don’t know what to do with it and who to give it to. Occasionally, it was a bit messy in the skips, so I wondered if it would be problematic to eat those foods, but most items aren’t inedible, says the SDU researcher.

A dumpster diver said that in one year he salvaged food from skips for a value of DKK 70,000. 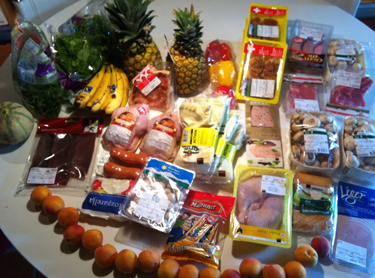 In France, they have attempted to reduce food waste from retail through legal intervention.
In 2015, France banned the country’s supermarkets from throwing out food and decided that the unsold – and edible – food would instead be donated for charitable purposes.

- As a starting point, it was a good idea, but it led to a new problem. Some of the charities said during the interviews that they are drowning in excess food and they are no longer interested in reducing food waste. Again, it is a question of whether the efforts are not adjusted and adapted in interaction between the involved actors, says Johanna Gollnhofer.

On the way to less food waste?

She points out that, although we can never escape food waste, there is a great potential for us to become better at reducing it:

- I expect that we’ll see less food waste in the future. For example, an increased use of artificial intelligence can provide information about what goods we use – and when we do. Another thing is if we imagine that we, the consumers, are buying more and more food online and that there will be fewer physical stores. For example, it will reduce the time in which the food is distributed, she says, pointing out that a responsible mindset and the level of awareness in the population will continue to play a central role.

Johanna Gollnhofer is an Assistant Professor at the Department of Marketing & Management, where she researches sustainability, the sharing economy and resistance to the consumer society.

Food waste is defined as food that could be eaten but is not, for example thrown out leftovers.