Students have been involved in improvised theatre to become aware of how to live more sustainably. Behind the project are researchers from SDU and they are impressed with the young people's dedication.

The scene is set at Västmanland County Museum, Sweden:

A teenage girl is a little crazy about a boy and invites him over for a burger. He is vegan and reacts negatively to the idea of eating dead animals. She starts eating vegan with him instead.

Over the next months, they see more of each other. The girl still lives at home, and one evening, when the family's dinner consists mostly of meat as usual, she scolds her mother. The parents do not understand what has happened to their daughter.

The dilemma that arises on stage is just one of many that young people encounter in their everyday lives.

A research collaboration between SDU Theatre Lab, Västmanland Museum and the Swedish research institute RISE has invited young people inside the museum and given them an opportunity to relate to climate complexities.

Improvised theatre is well-suited to working with everyday dilemmas.

‘Improvised theatre is well-suited to working with everyday dilemmas. The young people have come up with their own stories, which have led them to think about the CO2 problem,’ says PhD student Merja Ryöppy from the Department of Design and Communication at SDU in Kolding.

She has helped launch the project with Associate Professor Henry Larsen and Theatre Consultant Elena Strøbech from the Department of Entrepreneurship and Relationship Management. 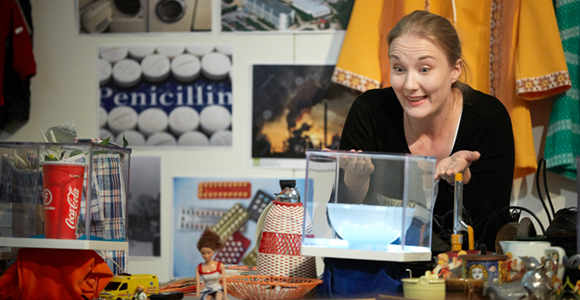 On stage, the young woman’s boyfriend introduces her to a new world without meat. She ends up becoming a vegan herself and the conflicts with her parents escalate, but after some time her parents discover that they eat less meat themselves.

Such changes are interesting to understand, says Henry Larsen.

According to Henry Larsen, the project has worked with climate issues in a way that has invited all contributors to think about how we can live more sustainably and how each of us can contribute. Whether it's about individual changes or getting an upper secondary school class to go on a study trip by train instead of flying.

‘Participants were not only supposed to work with their own stories. They also worked with historical objects that could make them understand how people's relationship with objects has changed over time,’ says Merja Ryöppy.

‘We examined how our society has changed in relation to the use of things that we want to own and buy. We used museum objects, such as birch bark shoes, to work with life throughout the ages.’

‘In the old days, shoes were passed down several generations, but today the consumption pattern is quite different. The participants had to tell stories about how we use objects today compared to the generations before us,’ she says.

It is the future generation that will have to take up the climate battle, which we have tried to tell our participants through theatre, and we’ve succeeded to a fault.

‘The project contributed to increased activism. It does matter that we are doing this and there is hope. It is important to be able to discuss dilemmas and what you end up doing,’ says Merja Ryöppy.

‘We saw that the teenage generation feels a great deal of responsibility, and the project has helped them with how to tackle the climate battle. ‘It is the future generation that will have to take up the climate battle, which we have tried to tell our participants through theatre, and we’ve been very successful at that.’ 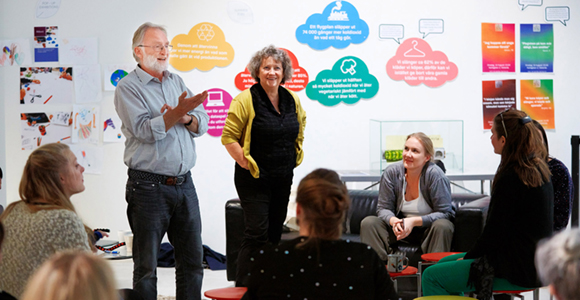 Although the project involved only a small number of students, Henry Larsen points out that the process in its entirety has been the most important takeaway.

‘There is a lot of focus on big changes, but if we are to understand what is at stake, we need to work with concrete interactions. If young people, as well as the elderly, can influence their social circles, well, then it has made a difference,’ he says.

SDU Theatre Lab plans to organise a similar project in Denmark in the near future, says Merja Ryöppy:

‘We have been involved in and sought funding for a Nordic project that focuses on activating democratic debate about lifestyle changes through theatre and design methods. For example, the City Archives of Kolding is interested in collaborating with SDU and doing similar things. So, the future looks interesting.

SDU Theater Lab at SDU in Kolding offers students and researchers a ‘laboratory’ where they can explore social dynamics and objects through active theatre methods.

Merja Ryöppy is a PhD student and affiliated with the Department of Design and Communication at SDU in Kolding. She teaches theatre methods as part of design processes.