In search of the deepest secrets of the sea

The hadal trenches are some of the least explored places on Earth. Most of what’s going on down there remains a mystery, but we’re on the brink of unlocking it, as a series of ambitious expeditions are planned.

In Greek mythology, Hades is the realm of the dead in the underworld. A dark, lifeless place where man after death is forced to lead a miserable existence in an eternally joyless shadow life. The first researchers who ventured down into the world of the deep sea also reckoned it had to be a dark and lifeless place.

Therefore, all of the globe’s oceanic depths between 6,000-11,000 metres came to be described as ‘the hadal zone’. At the end of the day, what could one expect to find down there, besides a dark, desolate wasteland?

As it turned out, quite a lot. The hadal zone is anything but as lifeless as the Greek realm of the dead. On the contrary, the place is teeming with life – even at the very bottom of the hadal trenches, which are up to 11,000 metres deep.

– It is more the rule than the exception that we discover new species on our major expeditions, says Ronnie N. Glud, Professor of Biogeochemistry and Head of HADAL, the new Danish centre for basic research.

On his expeditions to hadal trenches with such exotic names as the Mariana Trench, the Atacama Trench and the Kermadec Trench, he has repeatedly encountered a myriad of life at the bottom of the trenches. For example, despite the eternal darkness and crushing pressure, both sea cucumbers and supergiant amphipoda live here, but these animals aren’t the ones that preoccupy Ronnie N. Glud the most:

It is more the rule than the exception that we discover new species on our major expeditions.

– It is, of course, fascinating to see these bizarre supergiant deep-sea amphipoda. However, the most abundant organisms, and those which truly matter down here, are bacteria and viruses. There are huge amounts of them, and their activity plays a crucial role in the conditions required for life on Earth.

– For example, the microbial decomposition of organic matter in the deep-sea sediments is of great significance for the oxygen and carbon dioxide levels on Earth.

But how is it that such a desolate and dark environment, seemingly isolated from everything, can sustain so much life?

How is this abundance of life even possible?

One of the secrets as to why the microbes are thriving is the relatively large amount of organic matter available to them. A hadal trench acts a bit like a funnel that accumulates most of the matter at the greatest depths, such as sinking dead algae, plants and animals.

This process is strongly stimulated by seismic activity such as earthquakes, where the mud slopes and all of their life forms subside and end up at the bottom of the trenches.

– Another important factor is that the increasing pressure inhibits the activity of the bacteria that originally colonised the organic matter at the surface. Therefore, the matter reaches the depths relatively undigested, and the specialists of the trenches, adapted to the crushing pressure, can help themselves to the special of the day, explains Ronnie N. Glud.

Bacteria are thus found in huge numbers in the deep-sea sediments, but greatest abundance of life forms is actually viruses.

– Viruses are by far the most numerous life form in the whole world, and we now know this also applies in the deep sea, says Mathias Middelboe, Professor of Marine Microbiology at the University of Copenhagen. He is also affiliated with the HADAL Center and has joined Ronnie N. Glud on several deep-sea expeditions.

The deep-sea viruses and bacteria are fighting an endless battle to sponge on each other: On the one hand, viruses kill huge amounts of bacteria; on the other hand, they also ‘help’ the bacteria thrive. This is partly because they contribute to the organic matter being recycled when the virus-infected bacterial cells die. And partly because they add important genetic matter to the bacteria.

The bacteria thus gain from being invaded by viruses – but only to a certain extent, and they fight back and develop defence strategies if their community is threatened.

– Surprisingly, viruses have been shown to be extremely effective in supporting the success of bacteria. They can spread genes from one host to another and thus drive the evolution taking place in the trenches, says Mathias Middelboe.

When a virus ingests a host – in the deep sea, typically a bacterium – it carries genes. This may be a gene that the virus has taken from a previous host, which is then passed on to the new host.

– Maybe the genes are valuable to the new host, or maybe they aren’t – in which case they aren’t used for anything. But they remain present and can be activated if it turns out the host can benefit from it. It’s selection and evolution, he explains.

There is a great deal of elucidation ahead in describing and mapping this gigantic pool of unknown genetic information.

This has been going on for billions of years, and therefore we should expect to find an enormous number of genes in the deep-sea bacteria that have been spread and shared by viruses, he believes.

As an example, he mentions the discovery of a gene that a virus has passed on in a bacterium which he and his colleagues found in a deep-sea sediment. This gene is also found in cholera bacteria on the surface of the Earth.

– It is also found in sewage bacteria as well as in many other types of bacteria, which goes to show how far and wide viruses are able to spread genes. It may have different functions in different bacteria, so it doesn’t automatically follow that all bacteria with this gene pass on cholera to us. It is utilised differently from bacterium to bacterium, he elaborates and adds:

– Approx. 80% of the genes we find in viruses encode functions that we do not yet know, so there is a great deal of elucidation ahead in describing and mapping this gigantic pool of unknown genetic information.

– As it turns out, the hadal trenches are neither as void of life as previously thought; nor are they completely isolated and inaccessible. In fact, there are quite efficient and fast transport routes between the surface and the deep sea. These take place via subsidence, oceanic currents and seismic activity.

Therefore, it is not only algae, dead animals and plants that sink to and accumulate at the bottom of the hadal trenches. So do environmentally hazardous substances.

In 2011, Japan was shaken by a mega earthquake and the ensuing tsunami flooded the cooling systems of the Fukushima nuclear power plant. Three reactors melted down, triggering the biggest nuclear disaster since Chernobyl.

Four months later, radioactive substances that could only originate from Fukushima were detected in sediment samples from the Japan Trench.

– It shows us that tsunamis can efficiently transport large amounts of matter from land and the coastal zone out to the open sea, where it accumulates in the hadal trenches, among other places. Video footage also showed that many aftershocks kept sending dead animals and other organic matter down to the bottom of the trench, says Ronnie N. Glud.

Mercury and PCBs in crustaceans

Environmentally hazardous substances such as PCBs and heavy metals such as mercury are also finding their way.

– Samples from hadal crustaceans contain much higher concentrations of environmentally hazardous substances than one would expect, he says.

What this means is still too early to answer:

– We do not know. Maybe there are organisms down there that are good at metabolising the substances. Perhaps the substances are incorporated into organisms and thus form part of the hadal food web – but they will likely never get out of the trench again.

He, Mathias Middelboe and their research colleagues in HADAL will search for the answers in the sediments of the abyss.

Life must be examined in the ocean depths

For obvious reasons, it’s an extremely difficult and costly affair to put a human or two in a deep-sea submersible and lower them to a depth of 10,000 metres. It’s certainly not harmless, either. A cheaper and less dangerous alternative is to send robots with equipment and cameras into the abyss. They can then perform experiments and measurements down there and retrieve sediment samples for the scientists on the mother ship.

The challenge for us has been to find ways of conducting scientific studies in their natural environment – and this means directly on the abyssal seabeds.

– It is difficult to retrieve living organisms to the surface. For example, due to the extreme hydrostatic pressure, the metabolism of bacteria will change, so the challenge for us has been to find ways of conducting scientific studies in their natural environment – and this means directly on the abyssal seabeds, Ronnie N. Glud explains.

The team behind the research centre has also developed pressure chambers. When used in the lab, these can mimic the extreme abyssal hydrostatic pressure and thus investigate how various life processes are affected by pressure.

What’s in it for us?

– Although we are constantly learning more about the conditions in the hadal zones, we still know very little and basically we have no idea of what we are going to find down there, says Mathias Middelboe, alluding especially to viruses and the genes they carry.

– We will certainly find microorganisms that have adapted to the special environment. These can make us wiser about how viruses and bacteria interact under these conditions. Perhaps some of the properties we find in the microbes will prove to be fit for industrial purposes, such as enzymes that can operate efficiently at low temperatures and high pressure, he says. 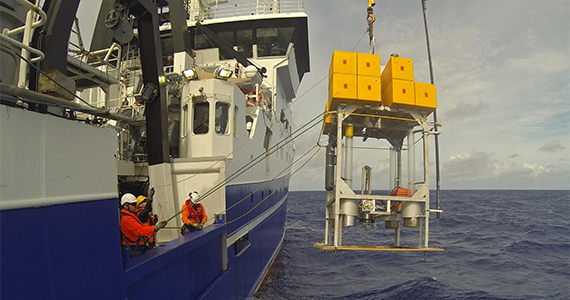 In the past, scientific explorations have led to beneficial spin-offs. Without human curiosity and the urge to explore, we would have neither electricity, penicillin nor washing powder today. No Velcro, no internet, no Teflon pans.

– It would be fantastic to find something, such as genetic matter that can be used in the pharmaceutical industry, for example, but it isn’t that prospect which drives us initially, says Mathias Middelboe.

What do we basically know about life?

Ronnie N. Glud, too, is rather driven by curiosity and the fascination of exploring life on the verge of the impossible. It’s more about conducting basic research that can contribute to man’s understanding of himself and the world.

– If we don’t know how our planet works, then what do we basically know about life or ourselves, Ronnie N. Glud asks rhetorically and continues:

– 71 per cent of the Earth is covered by water, of which the vast majority is more than 2,000 metres deep. We live on 29 per cent of the Earth’s surface and may think we have a very good impression of how our planet looks and works. But there is so much we do not know, and fundamentally, it is important to understand how the chemistry and life of the oceans interact to understand the planet we see today.

There is so much we do not know, and fundamentally, it is important to understand how the chemistry and life of the oceans interact to understand the planet we see today.

The next opportunity to explore life on the verge of the impossible will be in the autumn of 2021, when Glud and Middelboe, together with an international research team, set course for the 9,780-metre deep Izu-Bonin Trench in the western Pacific, a day’s sailing from Tokyo.

Ronnie N. Glud is a deep-sea researcher and Professor of Biochemistry at the University of Southern Denmark and the Tokyo University of Marine Science and Technology. He heads the Danish Center for Hadal Research.