Harbour porpoises have a new enemy: They grey seal

Biologists have long suspected this, but now there is DNA evidence: Grey seals hunt, kill and eat harbor porpoises.

10-15 years ago there were no gray seals (Halichoerus grypus) in Danish waters, but today the number has almost exploded in both Denmark and other northern European waters.

In line with the spreading of grey seals, she and colleagues have observed more and more dead harbor porpoises (Phocoena phocoena), which have obviously been subjected to attacks.

Kirstin Anderson Hansen is a biologist and expert in marine animal training. 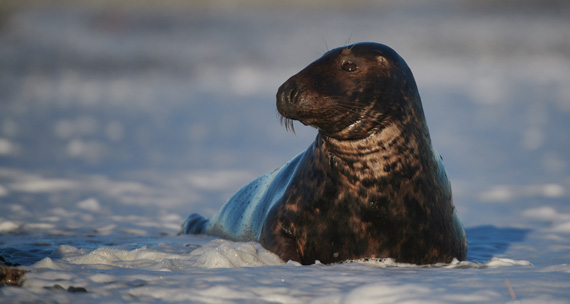 "Until now, we have not been able to say with certainty what had happened to these harbor porpoises. Maybe they died at sea and washed up on a beach where scavengers, for example foxes, ate them. But we have also long suspected that they were killed and eaten by gray seals. Now we have for the first time performed DNA analysis of a porpoise carcass and can with certainty say that a gray seal has eaten it, says Kirstin Anderson Hansen.

She considers it likely that a gray seal has hunted and killed the harbor porpoise prior to eating it.

She is not surprised at the DNA analysis, published in the Journal of Sea Research. The study was conducted in collaboration with researchers from the University of Veterinary Medicine Hannover. - Gray seals are predators. They differ from the other seal in Northern Europe, the harbour seal (Phoca vitulina), by being up to three times bigger. They exhibit more predatory behavior and hunt not just fish, but also marine mammals. So a gray seal hunting and eating prey is not a surprise, she says.


Although the first dead harbor porpoises began to appear on beaches only a few years ago, she is not surprised by this new grey seal behavior.

"There are perhaps so many gray seals now that they are adapting to the increased competition from others, and that maybe spurs some to develop a new hunting strategy," says Kirstin Anderson Hansen.

The washed up harbor porpoises all share a distinctive appearance. In parts only bones are left and in other areas the animal seems to be fresh and untouched. The grey seals eat mainly blubber and meat.

So far, biologists have suggested that harbor porpoises may have fallen victims of ship propellers or fishing gear, but now the new DNA analysis proves that they can also be victims of hunting gray seals.

In Danish waters, no carcasses have been found. The observations are mainly from northern German and Dutch coasts. From here there are also reports of gray seals attacking and eating young spotted seals. 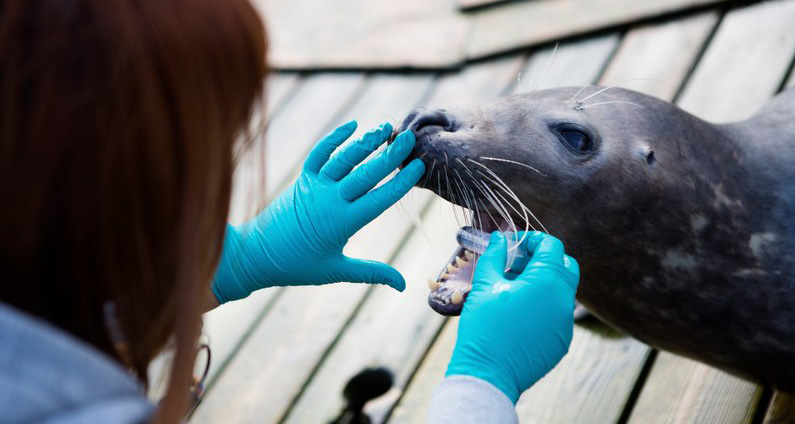 University of Southern Denmark biologists train marine mammals to work with the researchers. Among the animals are three grey seals.

Co-author Ursula Siebert is a professor, veterinarian and wildlife expert at the Institute for Terrestrial and Aquatic Wildlife Research, University of Veterinary Medicine Hannover. She says:

- We will closely observe if the predation by grey seals has an effect on the population development of harbor porpoises and harbor seals.

Even if you have to consider gray seals as sometimes aggressive predators, there is no need to fear them in Denmark, Kirstin Anderson Hansen believes. There have so far been no reports of clashes between humans and gray seals in Denmark.

- But as the populations grow, so does the risk. A respectful distance to the free-living grey seals will help to prevent any accidents, she says. 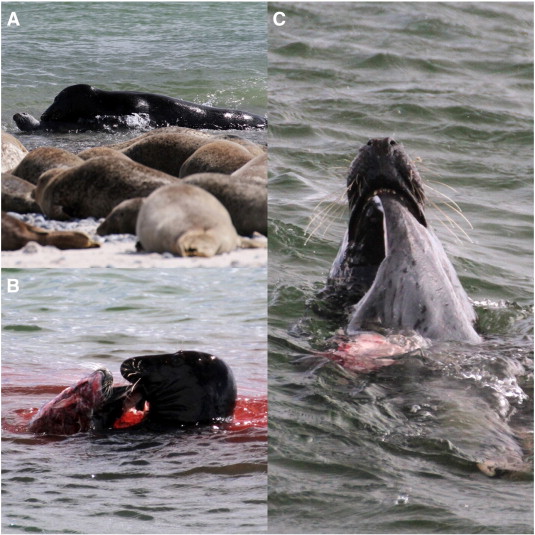 A grey seal has hunted and now eats a porpoise.

Kirstin Anderson Hansen's research area at SDU is marine mammals and how they are affected by human noise at sea. She is also a specialist in training marine mammals, including three gray seals, to work with researchers.

In her daily work with the three gray university seals, Kirstin's research team has repeatedly observed how one of the seals catches and eats sea gulls.

"We feed them and of course we make sure they get what they need, so hunger is not what drives them to hunt seagulls. They do it because they are carnivores, it's their instinct, says Kirstin Anderson Hansen.