The altitude of the flight is a deciding factor in whether drones are a disturbance and a cause for concern when they fly over people's houses and gardens.

The drones are above us, but they can give rise to various challenges when it comes to our privacy if they come too close. This was shown in an experiment where SDU researchers sent drones over the gardens of house owners in order to test their response to the presence of the drones.

In the experiment, the drones flew at a height of 25, 50 and 75 metres – for comparison, a lamppost measures approximately 10 metres.

“The house owners felt that the drones that flew at 25 metres above their gardens intruded into their private sphere. It was also a problem for some house owners when the drone was 50 metres above the property, while a drone at 75 metres did not elicit concern. This may be problematic for many people, as later this year the EU will presumably adopt a 20-metre limit for how low drones will be allowed to fly,” says Domen Bajde, Associate Professor at the Department of Marketing & Management.

More of a disturbance than expected
Bajde and his colleague Jannek K. Sommer studied people’s attitudes towards large drones (the drone tested weighted 9.5 kilos) and towards the very small micro drones that weigh less than 250 grams, often referred to as toy drones. The researchers also asked for the opinions of the house owners both before and after the test flight.

“Several house owners said that they were open to drones prior to the test, but it was clear that some had changed their attitude and generally showed greater scepticism towards drones after the experiment,” says Jannek K. Sommer, PhD student at the Department of Marketing & Management.

A typical problem is that people feel as though they are being observed and monitored by drones equipped with a camera. But they have also noted some other issues.

“Drones without a camera can cause just as much disturbance when they fly over people’s private property as drones with a camera. Many people are bothered by the noise and size, particularly in relation to large drones. And, generally, they feel that the drones intrude too much into their private sphere and that their presence is unnatural. Some people are fascinated by the drones on the one hand, but at the same time they have concerns for their safety,” says Domen Bajde.

Another problem with the presence of drones is that people become unsure of what a drone is doing and who is controlling it. This was also evident in another study conducted by associate professor Niklas Woermann in a public park, where people immediately started looking for the pilot who controlled the drone. 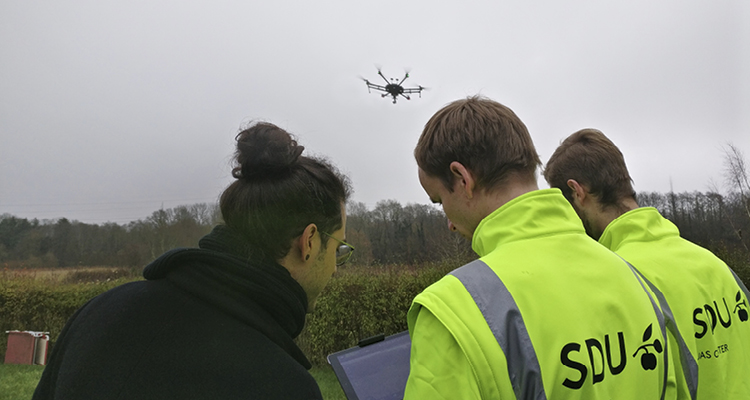 Discrepancy between legislation and people’s attitudes
According to the researchers, there is also a difference between the public’s knowledge of drones and the rules that apply to the flying them.

In urban areas, it is only legal to fly drones for professional purposes. Participants with knowledge of the legislative restrictions regarding the private flying of drones, often consider it unreasonable that a private individual should not be able to fly toy drones in their own garden.

“But most people assume that flying drones in their own garden is permitted. This is because people use their own common sense instead of finding out about the rules that apply to the use of drones. One of the participants in the study has, for example, removed the memory card from a drone so that his children are unable to use the camera when flying their toy drone,” says Jannek K. Sommer.

“The rules place many obstacles in the way of drone users, and we agree in general that the rules should be made clearer and less restrictive than they are at present, making it permissible to use drones that are safe and secure for both commercial and hobby use. But our study also shows that any changes to the legislation should take the concerns of the public into account,” says Domen Bajde. In a forthcoming study, the researchers will look into how private individuals use drones and how much they know about the rules regarding the flying of them.

The “Public reactions to drone use in residential and public areas” report can be read at the webpage: www.sdu.dk/en/dronepublic

The public’s opinion of drones

The project is one of several at the Department of Marketing & Management that explore how the public’s opinion of drones and the drone industry is developing and how it is shaped by concerns about the respect for privacy. The knowledge processed is important for a number of parties. This applies to, among others, authorities adopting legislation on the flying of drones, as well as the industry and the SDU UAS Centre, who can take the opinion of the public into account when developing and designing drone technology.

Read more about the venture