Drones are moving into the battlefield

The use of drones has changed the character of war, where modern warfare has once again become bloodier and more unpredictable.

13 people lost their lives and five thousand were injured when terrorists from the Japanese sect 'Aum Shinrikyo' gassed Tokyo's subway in 1995. The sect had previously tested the use of drones to spread nerve gas over large Japanese cities but failed and instead went with a low-tech option.

The sect had enough nerve gas to kill thousands, but fortunately were only able to release small amounts of gas from perforated bags left on the Tokyo underground system. If the earlier drone test had been successful, they would have posed a serious threat to Japan as a whole, and potentially the global community.

These early warnings were, however, not taken seriously at the time.

Today, the drone threat is being taken seriously. Developments in the field of drone warfare have become even more extreme in recent times, where drones are creating a new ‘bloodied’ environment. This is pointed out by James Rogers, Assistant Professor at the Center for War Studies, who since 2009 has been researching the spread and use of military and terrorist drones.

- We are heading to a point where I would argue that drones are not only becoming all-pervasive in the conflict landscape, but are also a threat to cities in Europe and the United States when, for example, international terrorist networks provide the Islamic State (IS) with equipment, he says and elaborates:

- We need only look to the recent example of Basil Hassan in Denmark, and the supply of expert drone parts to IS over a five-year period to see how terrorists can be supplied with and use high-tech drones. So, it is not just state actors who now have drone systems.

Drones were part of a quick fix in war. Now that they are becoming more widespread, they constitute an increasing threat

Obama and Trump have both used unmanned drone strikes to fight terrorists. In the past it was said that drones excelled at accurate, ‘ethical’ and precise strikes. But now drones are used in different, novel ways, and a ‘precision ethos’ is no longer the ambition.

- The latest emerging developments are in swarming technologies. Drone swarms will soon be able to fly in coordinated flocks of up to a thousand (or more), where each drone can be programmed for a specific target.

- This emphasises just how much drones will dominate the battlefield. If a drone swarm approaches, swooping like a flock of birds, it is very difficult to defend against. And this is just the start of it, James Rogers says.

One can imagine the same scenario under the sea, i.e. marine drones and swarms that have been pre-set to strike a particular target, such as fleets and marine soldiers.


James Rogers has also monitored some of the technologies and solutions currently being tested to confront the drones.

Among other things, the British, French, and Dutch military have trained eagles to bring down drones.

- But this does not work if there are multiple drones. And all things considered, how much would you actually want to rely on an eagle, the researcher asks rhetorically. 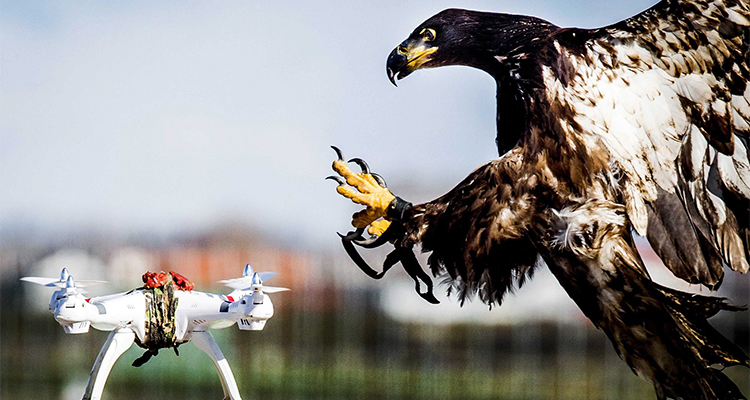 - The Japanese are experimenting with ‘drone hunting drones’ which spread a net across the sky to bring another drone down. This is perhaps a better solution but hardly works if many drones are flying at the same time.

There is also a kind of drone gun that can block a pilot from controlling their drone and even make it crash to the ground. The trouble is, the drone may be carrying hazardous material and a nefarious actor may want it to crash.

A third scenario is that the enemy has pre-programmed the drone to hit different targets so that it flies further towards one of the other targets and therefore does just as much damage.

Too separated from the conflicts

According to James Rogers, another consideration is public awareness of war and conflict. He points out that never have we been more separated and distant from the conflicts in which our native countries participate.

- One explanation for this is that we do not risk family members and friends in wars and conflicts as we once did. I just wonder to what extent we as Europeans and Americans follow and engage in today's conflicts. Governments have managed to keep very quiet and deliberately carry out drone missions without communicating it to the public, he says and concludes:

- It is our job, as an informed public, to find out more information and critique our wars.

One thing is certain; drones will continue to create chaos in the years to come.

According to The Bureau of Investigative Journalism , drone strikes have killed up to 12,102 people in Pakistan, Yemen, Somalia and Afghanistan since 2002, and up to 1,725 civilians and 397 children have lost their lives. There have been at least 6,786 confirmed drone strikes during this period.

Watch the TEDx video "The Edge of Drone Warfare" with James Rogers:

James Rogers is an assistant professor at the Center for War Studies and SDU's interdisciplinary centre D-IAS (Danish Institute for Advanced Study), where he works with military drones. He is currently a fellow at Yale University and later this year will embark on research travel to, i.a., Burkina Faso and Niger, where the United States has built drone bases. Together with Caroline Kennedy-Pipe, he is also working on a book entitled “Drone Warfare: Concepts and Controversies”, which is expected to be published at the end of the year.