​ Drone researchers at SDU are developing autonomous drones which can inspect overhead power lines. Equipped with camera, sensors and the ability of self-charging, the drones will replace expensive helicopters.

In the future, drones will keep an eye on the over 5000 kilometers of high-voltage cables hanging from power poles all over the country, constituting the backbone of the Danish electricity supply.

Drone researchers at SDU are developing drones that can fly close enough to the high-voltage cables that they can find wear and tear or breakages in the cables.

At present, the cables are inspected approximately once a year using helicopters. This costs around DKK one million per week. Therefore, the researchers have received funds from Energi Fyn's Development Fund to develop a drone equipped with a camera and sensors that can fly without being controlled from the ground - or as it is called in drone terminology "Beyond Visual Line of Sight" - and that to inspect the cables.

Recharging is a challenge

- One of the greatest challenges is that the drones can only fly for 30-45 minutes before they need to be recharged. We are going to solve that problem by equipping the drone with an energy harvester, where the drone can charge its battery from the cables, explains drone researcher Emad Samuel Malki Ebeid from SDU UAS Centre.

- Another challenge is that the drones should be able to fly in an area of high voltage. Drones contain several essential sensors, including GPS. Therefore, the drone will be equipped with sensors that are able to function despite the electromagnetic interference of the cables, he elaborates. 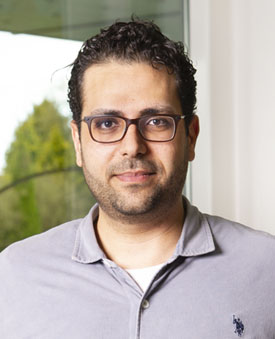 Energy companies are beginning to use drones to inspect electricity cables. But the drone researchers at the University of Southern Denmark are dreaming of making the drones autonomous and self-charging so that it is not necessary to have a pilot controlling and charging them from the ground.

Cable drones do not annoy anyone

- Previous research has shown that it is justifiable to fly autonomous drones near power lines because they are typically placed in remote, uninhabited areas. We programme the drone to fly to particular segments of the cables, so it's very important that the drone’s navigation units don't get confused in areas of high voltage, says Emad Samuel Malki Ebeid.

Due to esthetics and security of supply, it has been a part of the cable strategy, that cables should be laid in the ground, but in 2016 the Danish Parliament decided that all new 400 kV connections should be built with overhead lines.

Due to this decision, approximately 170 kilometers of air cables will be installed in Western- and Southern Jutland in connection with EnergiNet's investment in a power cable to the UK and expansion of the grid between Holstebro and the Danish-German border.

- For at least the next 25 years, there will be overhead power lines in Denmark because it is much more expensive to bury them. In addition, EU has around 200.000 km of overhead cables that need to be inspected regularly and the same goes to USA. So, a self-charging autonomous drone system for inspecting overhead cables would also have real value internationally, says Emad Samuel Malki Ebeid.