For decades, the whole world has watched in fascination when Disney interpreted Hans Christian Andersen with first The Little Mermaid and most recently the Frozen feature films.

Disney’s archives contain more than 65 million drawings, sketches, storyboards, models, puppets etc. from the Disney group’s productions since its beginning. The archives are primarily used as an internal resource for inspiration for Disney’s illustrators. They are not open to the public.

The security clearances are in place, and they have sent all their questions in advance. And now they finally get access to the Disney Animation Research Library and the opportunity to take a closer look at the sketches, drawings and storyboards for unfinished film adaptations of Hans Christian Andersen that Disney’s illustrators have worked on over the years.

They knew in advance that there was Andersen-inspired material in the archives, but they did not know the exact amount.

– There was an overwhelming amount of Andersen-inspired material. Several carts with anything from rough sketches to full storyboards were rolled to the room where we were supposed to be’, says Sara Bruun Jørgensen, who works as a research assistant at the Hans Christian Andersen Centre.

Inside the room, two archivists with white gloves started – with great care and caution – to show us the many Hans Christian Andersen projects stored in the Disney archives. Most of the material has never been shown to the public before.

– It really surprised me how much Andersen material Disney has worked on that has come to nothing. The archivists picked up one project after another from the carts, says Sara Bruun Jørgensen.

Among other things, there were a large number of sketches and drawings from Disney’s two attempts to create a feature film about the life of Hans Christian Andersen. Disney worked on an animated version in the 1930s that ended up being put on the shelf. And already in the 1940s, they tried again – in collaboration with film producer Samuel Goldwyn – with a feature film about Andersen, featuring both animation and live action. But this work was also shelved.

It was fascinating to see detailed drawings and sketches of buildings in Odense and scenarios from Andersen’s life.

This happened despite the fact that in connection with both projects, thorough research work had been done to portray the life of Hans Christian Andersen.

– It was fascinating to see detailed drawings and sketches of buildings in Odense and scenarios from Andersen’s life, among others from when he became an honorary citizen in Odense. In the 1930s, Disney sent people on an inspiration trip to Odense and Denmark to collect material for their film about Andersen’, says specialist consultant Anne Høgedal from the Hans Christian Andersen Centre.

Projects are stored – not forgotten

However, over the years, they have returned to the Hans Christian Andersen film project several times.

After World War II, Disney started to focus more on the fairy tales than on Andersen as a person. And in the archives, unfinished projects onThe Fir Tree, The Emperor’s New Clothes and The Nightingale were also displayed.

It was therefore perfectly clear to the project group, there, at the Disney Animation Research Library, that Disney, since the 1930s, has been deeply engaged in filming Hans Christian Andersen’s life and work.

And there is a great deal of truth in it when former Disney and Pixar illustrator Jørgen Klubien – whom they have interviewed for the project – says that Hans Christian Andersen is embedded in Disney’s DNA.

According to Klubien, Andersen played a part right from the foundation of the Walt Disney Company. Walt Disney was a fan of European fables and fairy tales and personally brought art books back from Europe containing Hans Christian Andersen, Aesop’s fables and Grimm’s fairy tales, among others, to inspire his illustrators, who in the early years were primarily Europeans.

Endings were a challenge

But despite Disney’s great interest in Andersen, it has never been easy for the film company to adapt the great Danish writer for the screen, Klubien explains about the Disneyfication of the fairy tales.

Andersen’s fairy tales come to life by means of the language, the prose and the curiosities, but they rarely contain any particularly exciting film plot. An important element of Disney’s work with the fairy tales is therefore to adapt them to the film medium. Andersen’s endings in particular have always presented great challenges for Disney’s illustrators because Andersen and Disney had very different purposes with their stories.

– In the archives, we could see a tendency for Disney in the years after World War II to start rewriting Andersen’s conclusions significantly, so that they had a happy ending. It wasn’t that common in Disney’s first Andersen adaptations, which are more true to the originals, even though Andersen’s conclusions are often brutal, Sara Bruun Jørgensen explains.

We could see a tendency for Disney in the years after World War II to start rewriting Andersen’s conclusions significantly, so that they had a happy end

– Walt Disney volunteered to produce a number of propaganda films during World War II in the years 1941-1944, and this had an impact on his storytelling. He was driven to give people a great experience and create something entertaining because it was needed.

From bread and butter to equilibrium

Andersen’s intentions with his works were far from being that unambiguous.

– He was very conscious of his different target groups, so his motives and intentions changed from work to work. Also depending on whether he wrote novels, dramas, poems, travel books or fairy tales, explains assistant professor Torsten Bøgh Thomsen from the Hans Christian Andersen Centre.

– When Andersen published his first fairy tales, it was to put bread on the table; fairy tales had become a popular genre at the time, and the short texts sold well and were a better source of income than the novels. As he began to compose the fairy tales himself – instead of basing them on the stories he was told as a child – he worked his way up to the equilibrist level we know him for. 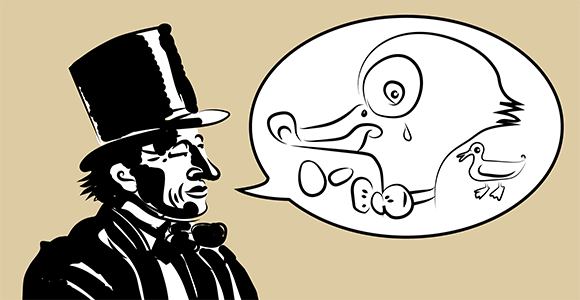 Regardless of the two great storytellers’ very different purposes, Disney’s heartbreaking interpretations of Hans Christian Andersen and their inclination towards happy endings have played a significant and often criticised role in the dissemination of Andersen’s fairy tales to a global audience and their understanding of them.

Both Americans, Portuguese and Italians today know The Little Mermaid as the story of Ariel, who eventually gets her prince, instead of Andersen’s far more gloomy ending.

But you can hardly criticise Disney for the group’s many years of work in interpreting Andersen. Actually, the Hollywood giant is doing what was also one of Andersen’s own methods, that is to borrow from other great artists and create new art from this’, Sara Bruun Jørgensen emphasises.

Whether the interpretations then reach the same world fame as Andersen himself, only time will tell.

Get a glimpse of previously unpublished Disney sketches from their work on Hans Christian Andersens-projects and read more about the film groups inspiration on the great Danish poet in the report Hans Christian Andersen in the United States -https://andersen.sdu.dk/wp/wp-content/uploads/2021/07/2021_H.C._Andersen_i_USA.pdf.

Disney projects on Hans Christian Andersen that ended in the archives

· 1930s: Disney worked on an animated biopic about the life of Hans Christian Andersen, which included sending researchers to Odense to gain detailed insight into what buildings and scenarios from Andersen’s life looked like in reality. In 1958, Disney returns to the idea and the sketches but eventually puts them back on the shelf.

· 1940s: Disney collaborates with film producer Sam Goldwyn on yet another Hans Christian Andersen feature film with both live action and animation. However, the collaboration was shelved in 1943.

· 1940s: Disney is also very interested in Andersen’s works during this period. In a research report from 1944, 20 of Hans Christian Andersen’s fairy tales are listed as suitable for film adaptation. Among them areThe Ugly Duckling, The Steadfast Tin Soldier,The Little Mermaid, The Little Match-Girl and The Snow Queen, all of which have ended up as film adaptations.

· Over the years, Disney also worked on film adaptations of: The Emperor’s New Clothes (featuring Donald Duck, Mickey Mouse and Goofy as the tailors), the Nightingale and the Fir Tree.