How much CO2 did your grandparents emit?

The UN Climate Panel estimates that if global warming is to be limited to less than 2 degrees by 2050 each world citizen must emit only 2-3 tonnes of CO2.

2-3 tons of CO2… What does it mean? Few people have the slightest idea about how much they, themselves, emit per year.

– Climate change and global warming are often shown by graphs presenting CO 2 emissions. It is very abstract. I hope that through real people we can give a better understanding of how we ended up here, and what it takes to avoid global warming, says museum inspector Sissel Bjerrum Fossat from Odense City Museums.

New opportunities with coal and gas

Therefore, historians and engineers have joined forces on the project "black transformation of the city life", where they will calculate how many greenhouse gases a family impact the climate with at different historical times. 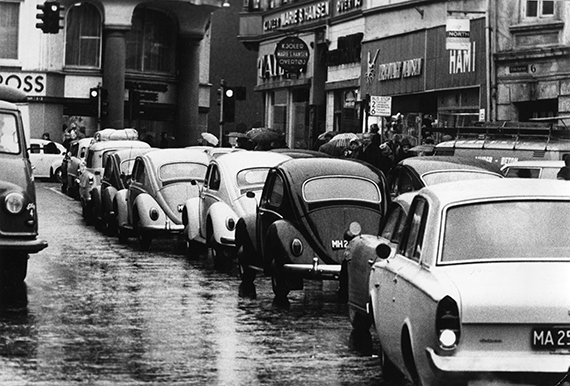 – It is a completely new way of working, says professor and sustainability researcher Morten Birkved from the Department of Green Technology, who is responsible for calculating the families' CO2 impact on the environment:

The first historical impact will be in 1853 when steam locomotives began to be used, and Denmark's first gasworks opened in Odense. Back then when people cheered on the new opportunities that coal and gas provided.

But most of the project will be about the post-war period, where oil also becomes part of the Danes' energy history.

During that period, the black transition came to affect all corners of everyday life, from imported bananas, televisions, refrigerators to detached houses with district heating.

The researchers must calculate a family's CO2 consumption from these seven segments:

– Instead of reading scientific and technical reports, we must dive into the historical archives to closely study the efficiency of the gasworks and other technologies; Read memos and shopping lists to see how much petroleum a family bought, and what kind of food they ate in the 1850s, says Morten Birkved.

– For example, the steam engine was of great importance for the industrial revolution from the middle of the 19th century, but we know from the historical archives that the degree of efficiency in some cases was only one per cent, says Morten Birkved:

– This means that one per cent of the energy you put into the machine comes out as electricity. Today, we have an efficiency rate of over 100 per cent because we also utilise surplus heat.

Today's technology has become much more efficient, but then there is the food, where we eat more meat and exotic fruits and vegetables all year round.

Both the museum inspector Sissel Bjerrum Fossat and the sustainability researcher Morten Birkved are excited to see the final outcome of how many greenhouse gases a family has emitted over time.

– The evolution of the environmental impact will certainly be dependent on whether we examine housing, food or electrical products. Today's technology has become much more efficient, but then there is the food, where we eat more meat and exotic fruits and vegetables all year round, says Morten Birkved.

– We are all part of climate change. It is all of us who emit CO 2, and through a specific picture of how much CO2 we actually emit within different segments such as housing, electrical appliances and food, we want to give people a tool to act on, adds Sissel Bjerrum Fossat.

In the middle of the industrial revolution of the 1850s, oil, coal and gas were “the shit” and brought about great optimism. Today, fossil fuels are just "shit". We have become wiser and now stand with the bill for the great gift that our great-grandparents launched 200 years ago.

Sissel Bjerrum Fossat emphasises that today it is difficult for us to imagine how big the revolution coal, gas and later oil was amounted to. How much it turned people’s opportunities and way of life upside down when people could suddenly travel by steam engine and be able to heat and illuminate their homes.

We take for granted that in mid-December we can walk around in a T-shirt inside, but you would not dream of doing that back then.

– As a museum, it is our task to put our present into a historical framework, and it had enormous significance for the entire standard of living when our ancestors began using nature's large accumulated energy battery in the earth. Not least for the entire public health, Sissel Bjerrum Fossat emphasises:

– We take for granted that in mid-December we can walk around in a T-shirt inside, but you would not dream of doing that back then. Oil, coal and gas increased public health because people could suddenly heat their homes very easily, cool their food, or wash their clothes - and not least, themselves. The kind of perspectives that we would like to contribute, says Sissel Bjerrum Fossat.

Urban life has been inextricably linked to the burning of coal, oil and gas since the mid-19th century. Fossil fuels revolutionized urban life from the mid-19th century. Steam locomotives began to run, and the gasworks gave the townspeople light in the streets. The new amazing opportunities were crucial to the families. At the time, no one thought that the burning of coal and oil emitted an invisible gas, CO2, and that in time it would become a huge problem for the Earth's climate.

Sissel Bjerrum Fossat is museum inspector at Odense City Museums. She has previously been postdoc at Department of History, University of Southern Denmark.