They give you funny cat videos online – do they get world domination in return?

Professor of Computer Science Peter Schneider-Kamp is concerned that we are handing over too much power to Big Tech by allowing them to collect information on us.

It’s just a few clicks… watching a funny video, shopping for a new winter coat, finding a new job or stalking your ex on Facebook. Okay, so there’s also talk of someone collecting data about us when we use all the free services and features that make our lives easier and more fun – but then, who cares? Surely that’s nothing to worry about.

And maybe it isn’t. Or, just maybe, all of us billions of cybernauts are helping to make a small handful of tech companies so incomprehensibly rich and powerful that it becomes unhealthy for both society as a whole and the individual citizen. At best, unhealthy. At worst, harmful.

People are happy to give away their most valuable asset—their personal data—in exchange for free email services and funny cat videos. It’s a bit like African and Native American tribes who unwittingly sold entire countries to European imperialists in exchange for colorful beads and cheap trinkets.

For we’re like little worker ants, each carrying a small, insignificant pine needle home to the nest. Instead of a pine needle, we hand over a small bit of data, such as our age or gender, or the place we visited yesterday.

In time, many pine needles grow into a big nest – just like a lot of information makes a company big, helps its earnings go through the roof and gives it great power.

How all of this is connected, and how the great tech giants wield this power, Professor of Computer Science, Peter Schneider-Kamp, knows a lot about. And he’s worried.

The tech giants are extremely good at collecting data on their users. Using, for example, artificial intelligence and advanced algorithms, this data is transformed into valuable information for advertisers, and the giants make a lot of their money on ads and on reselling user data.

– Collecting data isn’t all that difficult – in principle, anyone can do it, and the data is worthless in itself. In practice, however, the tech companies have a monopoly on the technologies and computing power needed to get value out of the data.

– At the end of the day, it costs a fortune to develop those technologies, and if no one else can afford the same development work, the world risks becoming completely dependent on the giants’ technologies and solutions, says Peter Schneider-Kamp. 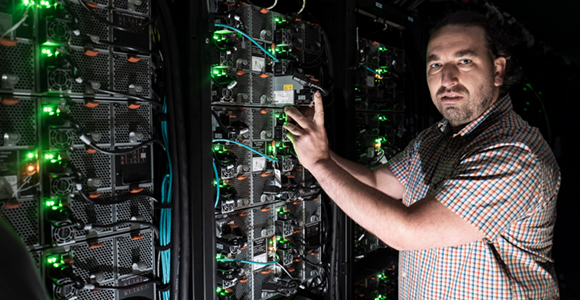 For example, earlier this year, Google presented their new chatbot Meena, which is trained to know 40 billion words to be able to act as a conversation partner that provides sensible and human-like answers to users’ questions.

Note the word ‘trained’, because it is, among other things, this process that costs so much money that neither small/medium-sized businesses nor universities can participate on an equal footing. The most recent fine-tuning training of Meena alone cost $1,500,000.

Is it in Google’s or your interests?

It’s not the new chatbot – or a new social media or new weather service or traffic app – that makes Peter Schneider-Kamp worried. After all, who wouldn’t like to enjoy all the apps and services through which modern technology enriches our lives?

The problem is the position of power that the monopoly puts the giants in. Because if they are the only ones who can afford to develop new technologies, they can attract even more users to their services, collect even more info, develop even better technology, attract even more advertisers – and start all over again. It’s an upward spiral that goes on forever.

Not that ads are inherently bad – not even when targeted at the individual user. Who hasn’t tried getting carpet-bombed by ads for warm boots because we recently googled new winter footwear?

If no one else can afford the same development work, the world risks becoming completely dependent on the giants’ technologies and solutions.

– However, the tech giants don’t just place the ads next to your feed. Instead, the ads appear at the top of your feed, and paid content from manufacturers may also be promoted in your feed.

Who decides what you see on the internet?

Society and the world order should be able to cope with winter boots, but what about when it comes to political messages? Or fake news that someone has posted on some website somewhere in the world and which has not undergone any verification at all before it is shared on, say, Facebook?

– Who should decide if money can buy a great ranking on Google searches? Who will prevent content from being withheld from our feeds?

Today, only the companies get to decide. They have no editorial responsibility for their content and can sell advertising space to whomever they want or make room for the political views and beliefs they see fit. At the same time, they can also censor pages they don’t want to appear in your feed.

Meena and the other digital assistants, such as Siri and Alexa, are expected to become more and more widespread over the next few years, and to an even greater extent they can help shape a person’s information flow and thus influence, for example, our shopping, lifestyle choices and political opinions.

– Many people use Google searches, social media and soon also digital assistants as a source of information on what is happening in the world. Do we really want a handful of tech giants to have such a major impact on what information we get?

– I certainly don’t. They can, in principle, decide to support or fight a government. In my opinion, that’s a danger to our democracy, says Peter Schneider-Kamp.

How do we break the monopoly?

He points out that none other than the tech giants have insight into how this sorting, ranking and censorship take place.

Many people use Google searches, social media and soon also digital assistants as a source of information on what is happening in the world. Do we really want a handful of tech giants to have such a major impact on what information we get?

Google’s and Facebook’s algorithms are constantly changing, and any insight we’re getting is totally at the mercy of the giant corporations. Forget about getting any influence.

Even the most restrictive states have difficulty controlling these channels, but if the monopoly is to be broken, restrictive legislation must either be introduced or a breeding ground for insight and real competition must be created, allowing smaller companies to get a foothold in the market and develop the technologies further.

– One may hope that it will help to impose a number of legal restrictions on the companies, such as a requirement for editorial responsibility. Nevertheless, I doubt this will happen. They already have too much power, and they have effective lobbyists, says Peter Schneider-Kamp, who at the same time points out that insight into legislation and politics is outside his expertise as a computer scientist.

Still, we must find a solution, he believes. Another possible solution is the introduction of transparency requirements, thereby forcing companies to share the data and models needed to develop new technologies.

At present, access to some of this material can sometimes be purchased from the tech giants, but the cost is so prohibitive that few public research institutions or smaller companies can afford it.

– Therefore, the system is biting its own tail, and if we want real competition, the monopoly must be smashed, says Peter Schneider-Kamp.

The unfathomable wealth of the tech giants

With that kind of money in their pockets, these companies are currently more powerful than many medium-sized states. For example, Apple’s earnings exceed those of countries such as Belgium, Russia, India and Mexico. If Apple wanted to, the company could launch an investment project equivalent to double that of the US Marshall Plan, which sought to get Europe back on track following World War II.

That equals around DKK 100 billion in present price levels.

Every now and then, the corporations make data and models available to the public. For instance, in connection with the global COVID-19 crisis, both Google and Apple have released data from their map services on how users move about. Who drives to work? Who stays at home?

This information is a treasure trove to epidemiologists and authorities working to limit the spread of infection.

– Making the data available for free is a good thing. And the giants get a little goodwill. Still, it doesn’t fix the key problem: It is they, not society, that decide whether the data should be available to the public, says Peter Schneider-Kamp.

A third solution could be that we users start paying for the services that we currently receive for free – that is, unless we don’t consider handing over our data as payment.

– By funding the services through micropayments, there would be no need to resell information on the users. For example, a Google search could cost a penny, to be paid as a monthly subscription. Or, imagine a fixed subscription that gives access to select apps – just as we buy access to a TV package or streaming service today.

You can always download a report with all the information Facebook has stored about you. Brace yourself for a gargantuan report, which can be thousands of pages long if you want to print it out. The report of yours truly is a whopping 2.8 GB and took 20 minutes to generate.

Peter Schneider-Kamp is Professor of Computer Science at the Department of Mathematics and Computer Science. He researches artificial intelligence and is also a lecturer, IT entrepreneur and innovation manager.