The cannabis plant's long road to the medicine cabinet

Billions have been invested, and the first Danish medicinal cannabis product is on the market. In the eye of the storm is researcher Rime Bahij, who dreams of mapping the ingredients of the cannabis plant. She hopes the evaluation of the two-year trial scheme of medicinal cannabis will open up to more research.

When researching plants, it is not often that one senses the presence of history. Rime Bahij notices this when she studies cannabis.

Within a short time, the plant has moved from the shady market among pushers and pickpockets, to slowly sneak itself into doctors' medicine cabinets, as a remedy for pain.

After so many years of the plant being banned, it is fascinating to be allowed to study the plant through the eyes of science

- In thousand-year-old Chinese and Indian medicine books, you can read about the cannabis plant's positive effects against pain. But the plant went on the list of illegal drugs, and then they stopped investigating its beneficial effects.

- After so many years of the plant being banned, it is fascinating to be allowed to study the plant through the eyes of science, says researcher Rime Bahij from the Department of Green Technology.

For six years, Rime Bahij has been researching and teaching others about the cannabis plant. Initially focusing on industrial hemp, however since 2018 the process has gone quickly as the Danish experimental scheme with medical cannabis came into force.

First university with a license

- As the first university in the country, we received a license from the Danish Medicines Agency (Lægemiddelstyrelsen) to receive, handle and distribute cannabis, says Rime Bahij.

With a license in hand, the researchers from the Department of Green Technology were given the opportunity to help the Funen horticulture companies, which at a rapid pace replaced a large part of the Funen topsoil in order to join what everyone expected to become a booming market for medicinal cannabis.

- We guide farmers in which varieties they should choose, and analyse the plants for active substances. When developing medicinal cannabis, you need to know how many active substances, cannabinoids and terpenes are in the plant, says Rime Bahij. She explains that the largest Danish cannabis producers are all on Funen: Aurora Nordic, Schroll Medical and Spectrum Therapeutics.

- The Funen horticultural industry is world-famous for its skill and efficiency. Furthermore, it has a rare and extensive knowledge about cultivation in greenhouses, says Rime Bahij. 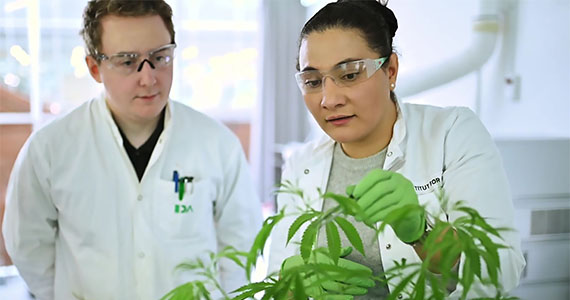 She points out that the world's largest producer of medicinal cannabis, Aurora in Canada, has chosen to cut its production in its home country to increase production on Funen.

- They have simply acknowledged that production on Funen is more efficient, emphasises Rime Bahij.

Denmark was the first country in Europe to have a trial scheme with medicinal cannabis, and after 2018 the hopeful Danish gardeners were rolling in billions of foreign investment.

Major Canadian and American investors were ready to play a role in the European cannabis adventure, which according to the analysis "The Cannabis Legal Report 2019" is set to become the world's largest market for medicinal cannabis with a turnover of DKK 900 billion.

However, there is hesitation from license agencies in supporting large research projects, due to doctors’ reluctance to prescribe medicinal cannabis. Additionally, newspaper headlines about huge losses and uncertain futures, have made it difficult to meet expectations for a major business adventure.

But just as the interest in cannabis was about to be lost and investors started to lose hope, two pieces of good news emerged.

Aurora Nordic in Odense has received approval for the first Danish-produced medicinal cannabis product, and is thus ready to conquer the market.

Additionally, a specialist laboratory, QNTM Labs, has chosen to locate their headquarters in Odense. QNTM Labs can perform the certified analyses that the Danish Medicines Agency requires for the approval of products containing medicinal cannabis.

- It is a victory that the first Danish-produced product is now on the market after two years. At the same time, the road to approval of new products will become much easier when manufacturers can get the ingredients approved at a certified laboratory in Odense.

Previously, the samples had to be sent to the Netherlands, and it has been a prolonged and difficult process, explains Rime Bahij.

Rime Bahij has signed a contract with QNTM Labs, where she, among other things, will help to set up laboratories so that they fulfill all the Danish Medicines Agency's requirements and guidelines that will be set so that the laboratory can carry out certified analyses for Funen's gardeners.

- We will enter a close collaboration where our students will get access to laboratories with the latest technology, and we also want to collaborate on research in cannabis, says Rime Bahij.

Assessment of the experimental scheme

After two difficult years, Rime Bahij now hopes that the future for medicinal cannabis is brighter - she crosses her fingers and waits with great excitement.

The cannabis plant is gendered. There are female and a male cannabis plants. This is due to the bioactive molecules found in the plant, especially the groups we know as cannabinoids and terpenes. These substances are found especially in the flowers of the female plant, and they are the ones used for the manufacture of both the medicinal cannabis and for the illegal drug.

The two-year trial scheme is to be assessed, and Rime Bahij hopes that the assessment will make her work as a researcher easier:

- It is not easy to get permission for clinical studies to do with the cannabis plant. Right now, we are working almost exclusively with synthetic drugs. If the plant is opened up to be examined directly, it will mean a lot for our research in understanding the effects as well as side effects of the plant's ingredients.

Rime Bahij's dream is to map the beneficial effects and side effects of all the ingredients in cannabis.

- We do not have that knowledge today. There is a lot of knowledge from the illegal market, but we as researchers cannot draw on that knowledge. We must build knowledge systematically. I hope that this project, together with research colleagues from the Faculty of Health Sciences and the Faculty of Science, can start this process, says Rime Bahij. She also points out that it is not entirely easy to get funds to invest in cannabis research.

There is a lot of knowledge from the illegal market, but we as researchers cannot draw on that knowledge

- I think it has to do with the pilot scheme. We are eagerly waiting for an assessment of the scheme, and hope that it will open up for broader cannabis research and also that foundations will see the potential in investing in cannabis research.

Rime Bahij also points out that it is important that, as manufacturers get more products on the market, it is important that data collection and clinical studies can take place in which patient groups the products. This will help equip doctors better when prescribing medicinal cannabis.

Yet, until Rime Bahij gets through to the big sums of money, so she can map out the ingredients of the cannabis plant, she continues to support the producers of medicinal cannabis in the best way possible.

Among other things, the researchers are investigating how they can devise a solution to a specific problem, namely how the producers get rid of the waste, which is described as hazardous waste.

- Less than 10 per cent of the plant is used when we talk about medicinal cannabis. The rest of the plant is hazardous waste, and the producers must not destroy it themselves. It is expensive and difficult, and currently there is enormously poor utilisation of the plant, so we have to find solutions to that, says Rime Bahij.

Assistant Professor Rime Bahij from SDU Chemical Engineering, Department of Green Technology dreams of uncovering the ingredients in the cannabis plant, in order to understand the effects and side effect of cannabis for the benefit of patients. In general, she researches the extraction, separation and concentration of natural substances from plants, fruits, seaweed and algae. Among other things, she has purified the substance falcarinol from carrots, which researchers believe can fight bowel cancer and diabetes.