Ulrik Pagh Schultz has been appointed Full Professor in Aerial Robotics at the SDU UAS Center.

UAS for the good of future society

Ulrik Pagh Schultz came to SDU in 2005 and has been a member of SDU Unmanned Aerial Systems Center (SDU UAS) since 2017. When asked about his research and plans for future projects, Ulrik says: “I am motivated by the SDU UAS emphasis on development of technology for the good of society, and I find aerial robotics to be particularly interesting due to the massive potential for significant impact on the future of society”. 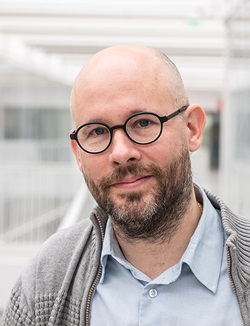 “I believe that research in drones can have a significant impact on the green transition, which I see as the largest technological and societal challenge of our lifetime”.

Ulrik explains that the development of aerial robotic technology for nature conservation can be part of solving one of the largest challenges faced by our society: the global threat to biodiversity. Making drones effective tools for nature conservation requires solving a range of challenging scientific problems, and the results can be applied in a wide range of other domains.

From ground robots to flying drones

Throughout his career Ulrik has worked with programming language abstractions for robotics across a wide range of domains, including swarming modular robots, welfare training robots, mobile agricultural robots, industrial assembly robots, and most recently aerial robots. His research has emphasized the use of general principles derived from programming language theory, combined with experimental demonstration on physical robot systems. Through Ulrik’s work on robotics programming he has investigated platform design, development, and test, for robotics in general and for aerial robotics specifically.

Regarding his future research at SDU UAS, Ulrik says: “I will investigate how we can efficiently and precisely program aerial robotic systems that are safe. Mainstream approaches such as ROS allow advanced, adaptive behaviors to be programmed into a robotic system but are typically constructed using a combination of brittle low-level programming and inscrutable AI components. I propose the use of high-level programming languages as a systematic method to address this challenge, and to experimentally evaluate this approach in the context of aerial robotics”.

Ulrik wishes to demonstrate that human programming ultimately is the key to allowing aerial robots to operate in real-world, outside environments, and that high-level programming languages lets us do this in a way that is effective, precise, and safe. “I hope to do this in the context of research projects that have an impact on the green transition, and in this way be part of developing the technology that (finally) lets drones become useful, autonomous robots that move throughout our entire airspace”.