The PhD project objective is the development of nonlinear super-elements of wind turbine blades for the improvement of structural models to be used in aeroelastic simulations and blade design optimisation. Traditionally dynamic simulations of wind turbines are based on modelling structural components like the blades using low fidelity models based on beam elements or linear modal expansion. The direct use of high-fidelity models based on shell or solid elements on dynamic models are too computationally costly especially since thousands load cases must be computed.

Super-elements are approximate models based on the reduction of high-fidelity models and retain its main characteristics of interest at a much lower computational cost. Its use on dynamic analysis has the potential of increasing the simulation fidelity while reducing the gap between the models used by the load engineer and the component designer.
The use of linear super-elements based on modal order reduction techniques, notably the Craig-Bampton method[1], date back to the 1960s. However, the use of reduction methods in scenarios where nonlinear effects are important require the extension of classical methods by including modal derivatives on the reduction basis. Geometric nonlinearities in wind turbine blades due to the large flapwise deflections result in changes of the coupling between edgewise bending and torsion in the edgewise modes.
The project, supervised by Professor Morten Hartvig Hansen (mortenhhansen@sdu.dk), will consist of the development of non-linear super-elements, based on the expanded Craig-Bampton method, to approximate nonlinear finite elements models based on s hell and beam e lements. This will provide a framework for the blade design where load and blade design engineers can work on a common model basis, reducing the gap between design and dynamic analysis. 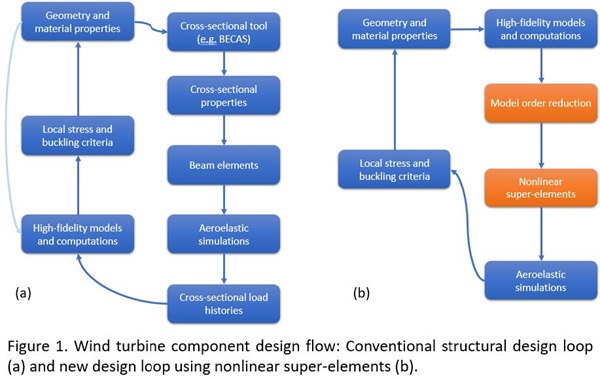 Strong focus will be directed in expanding the physical interpretation and understanding of wind turbine blades mode shapes derivatives and their influence on the dynamical behaviour. Another concern of the project is to evaluate the accuracy variation of the approximation model around the equilibrium position in order to establish the region where the reduced model approximates the high-fidelity model with acceptable accuracy.