Skip to main content
Center for Culture and Technology

Workshop with Ole B. Jensen and Paul Cureton, who discuss the use of drones in urban planning. This workshop is a public event and will be held on zoom.

This workshop focuses on the ways in which the earth is visualised through technologically lead perspectives and how this may lead to new understandings in our relationship to the environment. Referencing images produced from both historical and emerging forms of technology such as spacecraft photography, popular images of amateur drone operators and remote algorithmic sensing, this panel of speakers will present on the creative and critical potential that is afforded through the aesthetics of such distributed perceptions of the earth. The discussion will explore the notion of 'vision' not only as an act of sight and/or the representation of a site, but also as a speculative approach towards the role of imagination and the possibility of empathy on a planetary scale.

“#unamazingdroneviews: In defense of the poor image of the Earth”

Joanna Zylinska, Professor of New Media and Communications at Goldsmiths, University of London

Joanna Zylinska is Professor of New Media and Communications at Goldsmiths, University of London. The author of a number of books – including the book "AI Art:Machine Visions and Warped Dreams" (Open Humanities Press, 2020 )and the book The End of Man: A Feminist Counterapocalypse (University of Minnesota Press, 2018) and Nonhuman Photography (MIT Press, 2017) – she is also involved in more experimental and collaborative publishing projects. Her own art practice involves working with various forms of image-based media.

Geocinema (Solveig Qu Suess & Asia Bazdyrieva) is a collective that explores the possibilities of a “planetary” notion of cinema. Based in Berlin and Kyiv, they are conducting episodic research vis-a-vis experiments in moving image, narration and collective thinking. Each probe into ways of understanding and sensing the earth while being on the ground, enmeshed within vastly distributed processes of image and meaning making. Their work has circulated internationally, including most recently their first solo show Making of Earths at Kunsthall Trondheim (2020),and, in group shows including Critical Zones at ZKM Karlsruhe (2020-21) and Rethinking Collectivity at Guangzhou Image Triennale (2021). Bazdyrieva & Suess were Digital Earth Fellows (2018-19), and have been nominated for the Schering Stiftung Award for Artistic Research (2020).https://geocinema.network/

Max Liljefors is Professor of Art History and Visual Studies at Lund University. His research interests include visual historiography, the visual cultures of the biosciences, boundary object theory, and aesthetic metanoía.

11:45 Joanna Zylinska, “#unamazingdroneviews: In defense of the poor image of the Earth”

12:05 15 min. Breakout rooms for discussion (This time may also be used for a break for audience / panel members)

12:20 Return for open discussion, Q&A from audience and organisers.

On September 13, 1959, the Soviet spacecraft Luna 2 became the first man-made object to land on another celestial body–the moon. In 1961, when Adolf Eichmann was asked by the Israeli police why he had now abandoned the Nazi ideology he had served so loyally during the war, Eichmann pointed to the Soviet moon landing: that event, he said, caused ’a radical change’ within him.

Hannah Arendt, who covered Eichmann’s trial for The New Yorker, was probably unaware of Eichmann’s remark. In 1963, the year after Eichmann’s execution, Arendt published her essay, ”The Conquest of Space and the Stature of Man,” where she envisions a position in outer space as the ultimate observation point for a scientific study of man. Seen from space, Arendt writes, quoting physicist Werner Heisenberg, all human civilization will appear as nothing but a large biological process devoid of inherent meaning.

At that time, no photographs of Earth seen from space had yet been made public. When such pictures were released, in 1968, the motif of the globe soon became a symbol for planetary interconnectedness and unity. Although it has not escaped criticism, this interpretation of the motif of the Earth remains strong in public consciousness to this day.

These diverging meanings form the backdrop for the question I will discuss in my talk: can the idea, that distant, technological, disembodied vision engenders an empathic attitude, be reconciled with the fact that empathy is an embodied response based in brain-body processes?

Empathy, neuroscientist Victorio Gallese tells us, is a form of embodied simulation where the brain-body reacts ’as if’ it were interacting in peri-personal space, i.e., space within the body’s reach. Every image, regardless of origin, is ultimately ’seen’ by the human brain-body; how, then, does the discourse of disembodied, post-phenomenological vision relate to the theory of the embodied, empathically responsive beholder? In my talk, I will reflect on this tension between disembodiment/embodiment in our (empathic) relation to technological vision. I plan to first take a brief look back at 15th century landscape painting (as the start of a paradigm), and then catapult forward to present-day research about our embodied response to images and the plasticity of the body’s inherent understanding of its shape and boundary.

Solveig Qu Suess and Asia Bazdyrieva will expand on what they call ‘Geocinema’, which seeks to address the challenges of representation in an increasingly algorithmic world. Most imaging techniques today are operationalised in ways that escape immediate visibility or perceptibility   by humans — they are far too complex, too dispersed, too fast. Processes of recording, archiving, distribution, and visualisation of data are overwhelming in their amounts and scales, where the notion of an image as well as the notion of a recording device can be seen to have already been expanded while embedded in geological formations as much as in geopolitical configurations. In this presentation, they will address the co-production of landscapes within processes of remote-sensing, as an entry point into understanding aspects of what constitutes the new epistemological condition generally called the Anthropocene. If the image of the earth as a single form of knowing is ungraspable, then the question is no longer what is the earth but rather how is the earth?

Joanna Zylinska, “#unamazingdroneviews: In defense of the poor image of the Earth”

My talk will take as its starting point the widely popular images of different parts of the Earth taken by amateur and semi-professional drone operators, and collected on social media under the hashtag #amazingdroneviews. Developing further some of the ideas outlined in Nonhuman Photography (MIT Press, 2017), I will analyse the aesthetics and politics of this kind of ‘nonhuman vision’ – and the picture of the world it constructs. Yet rather than offer a return to a more human or humane perspective, I will probe the creative potential of decoupling vision from a bipedal human body and dispersing it across the environment. Through this, I will interrogate the technical affordances and potentialities of distributed perception and vision – in machines and humans. The focus of my critique won’t therefore be on the machinic aspect of vision, or on its aerial elevation per se. It will rather be on the assumed heroism of the eye-in-the-sky, enacted via the unique coupling of drone vision and GoPro Hero action cameras and their kin. In response, I will explore ways of mobilising the very same technology to enact a less masterful, less heroic and less domineering viewpoint, one that does not flatten the world into a postcard. Working against the notion of #amazingviews from high in the sky, both in terms of their breath-taking scope and very high resolution, I will propose the concept of ‘loser images’ as a feminist rejoinder to the heroic drone-image aesthetics. As well as developing, with a nod to Hito Steyerl, an exegesis of this concept, I will show a recent art project of mine, in which the production and curation of such loser images is being mobilised towards an enactment of a different relationship to our habitat.

Organized by Lila Lee-Morrison (post doc, University of Southern Denmark). The event is sponsered by DFF project Drone Imaginaries and Communities (www.sdu.dk/diac), the Surroundings Lab www.surroundingslab.org , and the Center for Technology and Culture (www.sdu.dk/cult-tech) 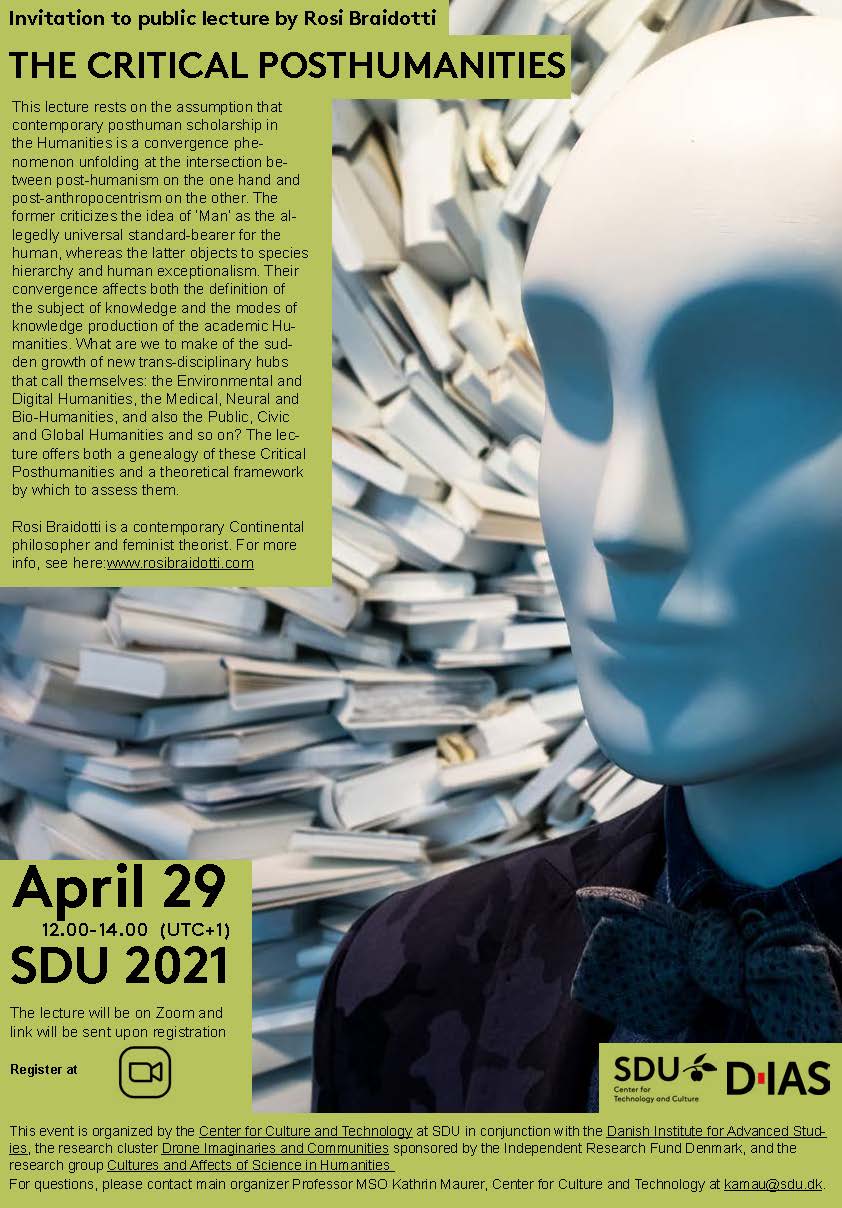