Recent progress of nanotechnology has led to the possibility to generate, control and manipulate with electromagnetic fields on the nanoscale. Plasmonics as a separate branch of nanophotonics deals with the exploitation of surface plasmon polariton (SPP) fields in metal nanostructures. 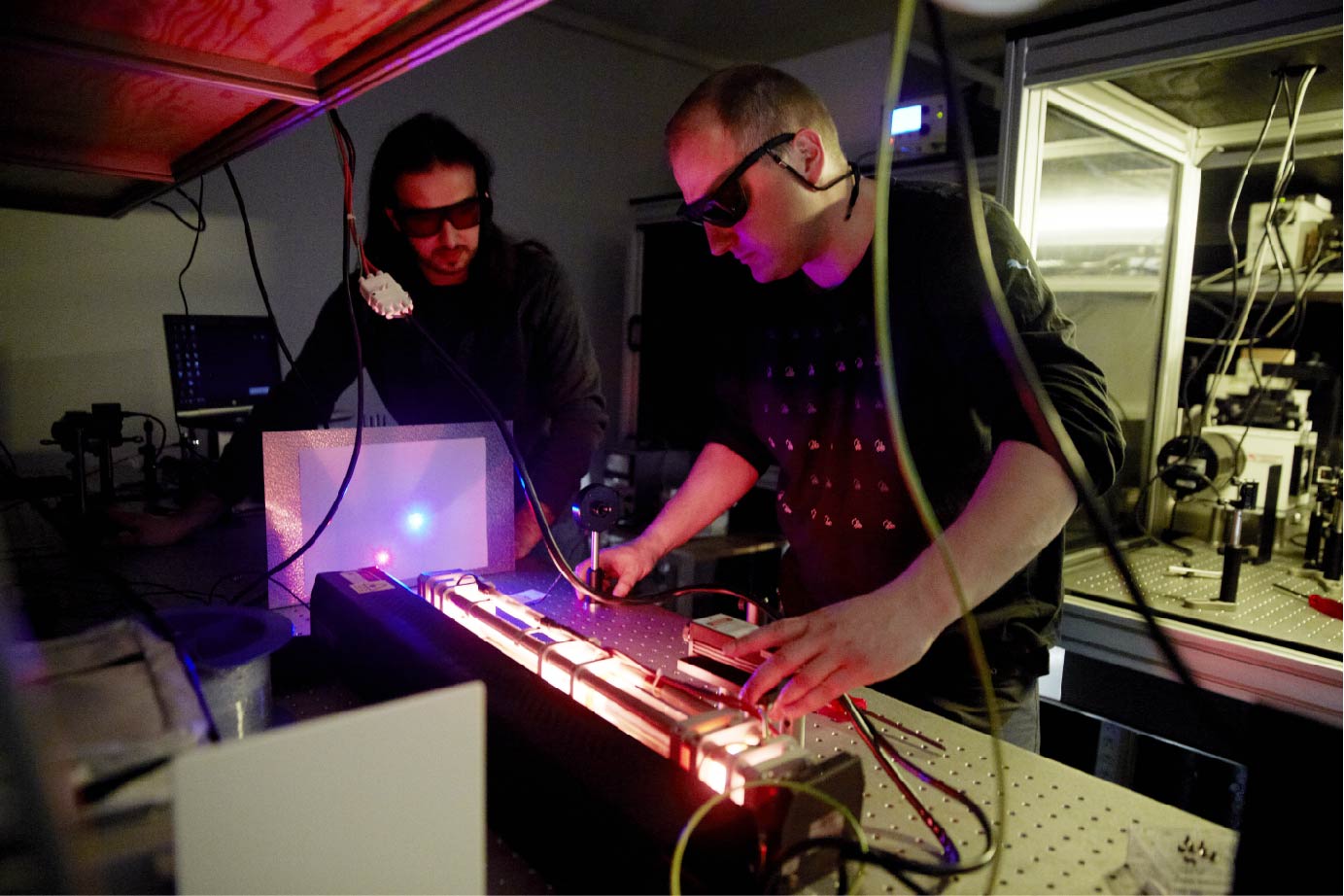 The next generation of challenges in the design and applications of nanophotonic circuits lies in understanding and manipulating collective phenomena — phenomena that emerge from the interactions of individual photonic and plasmonic components. Hybrid metal-dielectric nanostructures allow one to combine the best from two worlds: multiple-frequency and high-Q properties of photonic components with the nanoscale dimensions of surface plasmon polaritons, leading to a wealth of novel effects. Besides possessing novel physical properties, hybrid nanostructures provide opportunities to actively control plasmonic circuitries and to enable their diverse functionality.

This project aims at developing the foundation for ultra-compact nanophotonic components via optical nanotechnology based on SPP modes supported by dielectric/metal nanostructures. The strategic goal of the project is to advance active plasmonics so as to realize SP amplification, generation, modulation and detection. The proposed project encompasses fundamental studies of SP amplification and generation utilizing quantum dots (QDs) and organic nanofibers (ONFs), SP modulation and detection using the thermo-optic effect as well as application developments of miniature plasmonic environmental sensors. The successful execution of a very ambitious programme will be ensured by coordinated efforts of three strong research groups world-recognized within nanooptics and nanotechnology: the group of S. I. Bozhevolnyi (ITI, SDU) leading in nano-plasmonics, the group of H.-G. Rubahn (MCI, SDU) leading in organic nanotechnology and active (organic) nanooptics, and the group of K. Pedersen (Department of Physics and Nanotechnology, AAU) leading in nonlinear optics at surfaces and interfaces. The parallel development of environmental sensors will be coordinated by Senmatic A/S, a company specializing in fabrication of sensors for a wide range of applications, from environment to food and ship industries. The project work will be integrated with extensive European research carried out within the framework of EU-funded projects and networks, benefiting from direct collaborations with leading European scientists.

Read more about the project on the ANAP project page at the Department of Technology and Innovation (ITI).

Recent developments in synthetic chemistry have made it possible to design molecules with specific optical properties, such as large two-photon absorption cross sections or large second harmonic response which is interesting especially in the photonic domain. Such tailor-made molecules can be implemented in nano-scaled optically active devices for instance by growth of fiber shaped nanoaggregates on specific growth substrates. Because these nanofibers can easily be transferred from the growth substrate to an arbitrary surface without any change of the optical properties they have the potential to revolutionize the field of sub-micrometer scaled integrated photonics.

Fig. (a) SEM image of CNHP4 fibers transferred on the gold nanostructure array (b) SHG-LSM intensity image of the same spot.

Excitation of SPPs at metal nanostructures provides opportunities for controlling light-matter interactions on the nanoscale. Hybrid structures which combine both plasmonic and photonic components suggest new challenges in the design and application of nanophotonic circuits. One of the routes in this direction is a plasmonic nanolaser in which a nanowire plays the role of the gain medium which amplifies SPPs supported by the metallic subsystem. To operate as a plasmonic laser the hybrid structure should provide an efficient coupling between the excitations of the nanowire and the plasmonic modes of the metal substrate.

We study a hybrid nanostructure represented by organic (para-Hexaphenylene, p6P), mutually parallel nanofibers deposited onto a silver film.  Such a structure provides a coupling between nanofiber excitons and SPPs of the metal film. Although coupled exciton-SPP excitations are non-radiative at a metal-air interface, they can leak energy into a dielectric. This principle is exploited in leakage spectroscopy based on the Kretschmann geometry.

This project is a novel approach of developing plasmonic substrates by covering gold nanostructures with diamond-like carbon (DLC) thin films of three different thicknesses. Diamond-like carbon thin films have been grown by direct hydrocarbon ion beam deposition on top of gold plasmonic substrates fabricated by electron beam lithography (EBL). Using atomic force microscopy (AFM) the resulting triple-layered robust substrates (silicon substrate/gold/DLC) are tested mechanically by means of evaluation of threshold loads both for plastic deformation and cracking. This is important in order to study the conditions under which DLC-coated gold plasmonic substrates become locally destroyed under mechanical load and are no longer functional.

Fig. a) nanoindentation and b) wear mark on DLC-coated gold.

In the following, our special attention is focused on hybrid structures consisting of p-6p organic nanofibers deposited/transferred on a metal (typically gold) surface. Using interferometric time-resolved photoemission electron microscopy (ITR-PEEM) we have successfully demonstrated and quantitatively characterized plasmonic waveguiding at the interface between an individual p-6p nanofiber and a metal substrate. ­The recorded periodic PEEM beating patterns resulting from the phase-coupled superposition of the polarization field of the propagating SPP and excitation laser fields enable us to determine the dispersion relation of the SPP waveguiding modes. ­The overall results show that the structural control of the cross-sectional dimension of a p6p nanofiber provides a promising means for the customized design of plasmonic wave-guides. 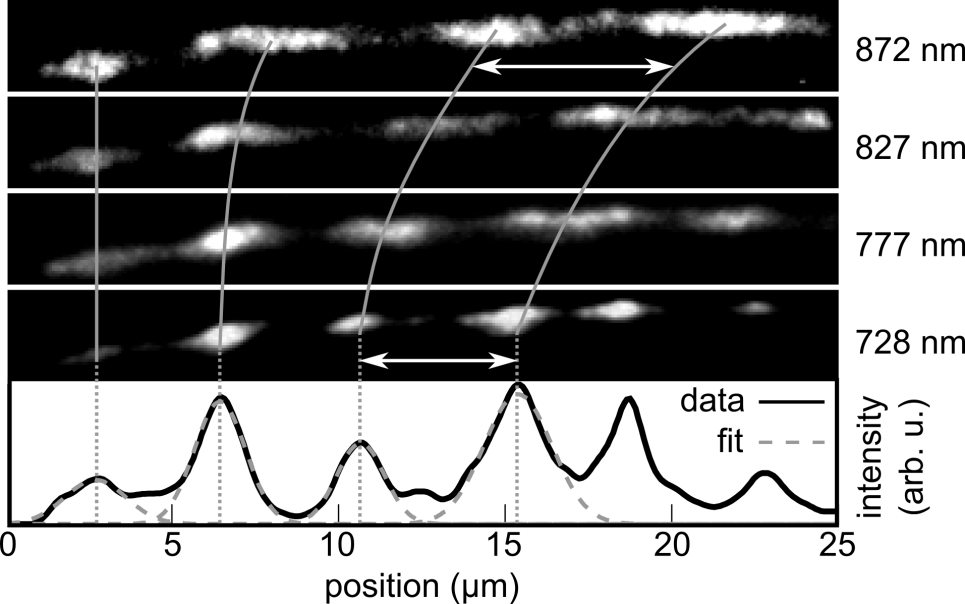 The main challenge of the project is to implement a method for aligning colloidal nanoparticles on microstructured surfaces and to study the optical coupling to plasmon waves and collective excitations in nanoaggregates. The main effect of nanoparticles and order is to enhance coupling efficiency and fabricate more efficient nanophotonic devices.

The first part of the project is dedicated to fabrication and characterization of noble metal nanoparticles and hybrid bimetallic structures. The second will incorporate organic nanofibers where the main focus will be on investigations of collective effects regarding waveguiding, chirality and lasing.

Fig. a) spherical and b) cubic silver nanoparticles.