Organic transistors for light-emission and detection

The first observation of electrically stimulated light from an organic semiconductor in 1987 launched a new research area on organic light-emitting devices with substantial application potential within flat-panel displays and lighting.

Among the appealing features of organic materials for light-emitting devices are their relative ease of processing combined with the possibility of tuning the colour of the emitted light via chemical synthesis of molecular building blocks with the desired characteristics. In addition, some types of organic small-molecules can self-assemble into crystalline nanofibers with additional features. In the organic transistors group, we study both organic nanofibers and thin films used as the active layer in transistor devices that function either as organic light-emitting transistors (OLETs) or organic phototransistors (OPTs). More specifically, the research topics are:

Techniques for the integration of organic nanofibers into devices

When organic films based on small molecules are used in devices, they are typically deposited onto the device substrate by physical vapor deposition. However, the crystalline nanofibers are formed only on specific surfaces that are typically unsuited for further processing, and special techniques for their integration into devices therefore needs to be developed. One technique relies on the initial growth of an array of nanofibers on a muscovite mica substrate and subsequent transfer onto a device substrate via roll-printing. The process is illustrated in the figure below, on which panel (a) shows the array of nanofibers prior to transfer, panel (b) shows the principle of the roll-printing method, and panel (c) shows the nanofiber array after transfer. Afterwards, electrical contact can be established by electrode material deposition through a nanostencil as shown in panel (d), while panel (e) and (f) show the contacted nanofibers observed with a fluorescence and white-light microscope, respectively. 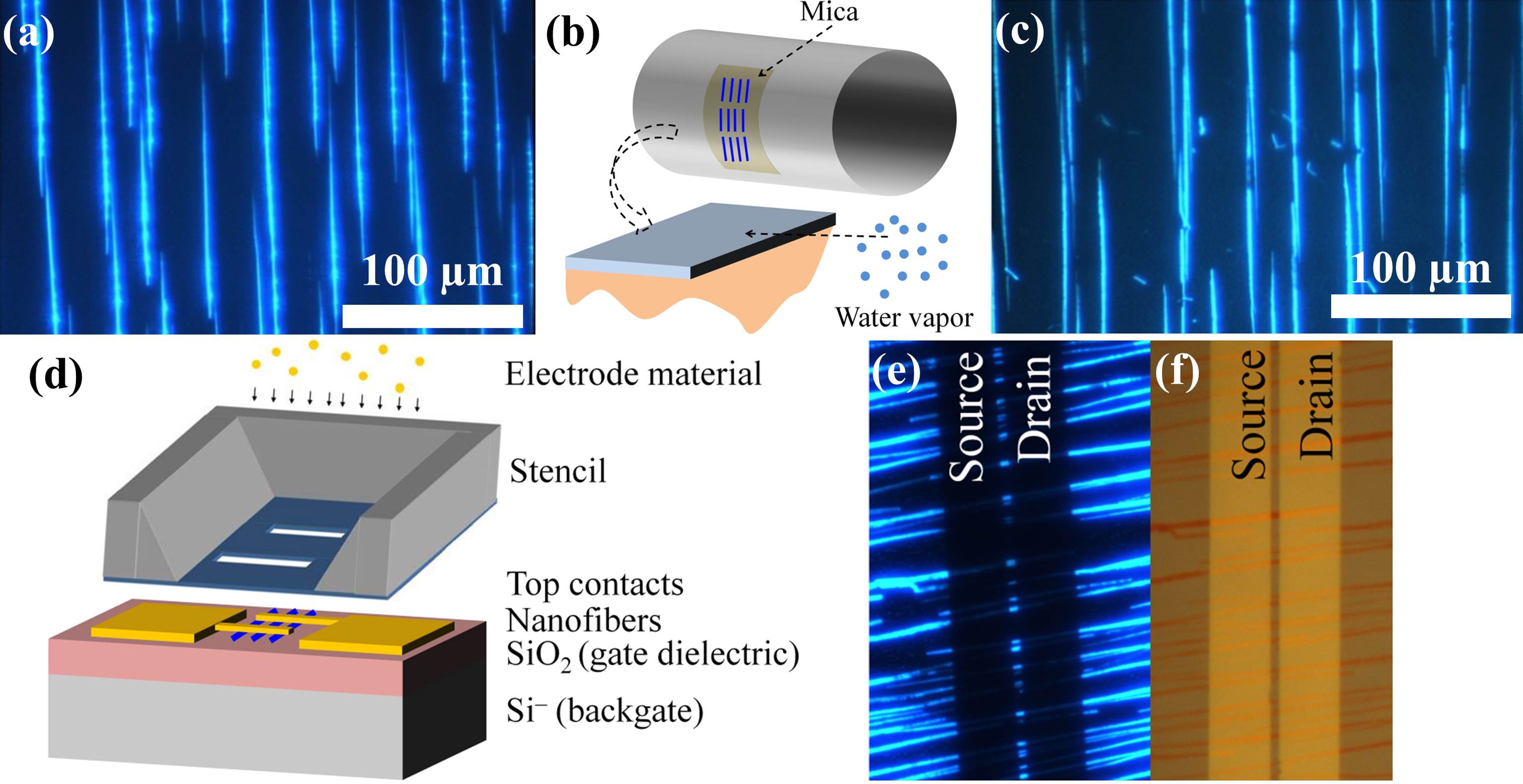 An alternative integration technique uses a gold surface as the substrate for nanofiber self-assembly. On this surface, there is no epitaxial relation between the surface and the nanofibers and there is consequently no well-defined growth direction. However, if artificial pinning structures are realized on/in the gold surface, these can act as nucleation centers for the nanofiber growth and thereby steer the growth direction to enable, e.g. the growth between two closely spaced gold electrodes. Finally, we also study an alternative way of top contact deposition that do not rely on direct evaporation, but rather uses an elastomeric substrate on which a set of contacts is made via nanostenciling. Subsequently this substrate can be laminated onto the organic material to establish the electrical contact.

Improvement of electrical and light-emission properties by functional interlayer materials

The performance of OLETs is strongly affected by the transistor platform materials, which forms an interface to the organic semiconductor. For example, the source and drain electrode material forms a metal-semiconductor interface, across which the charge carriers must be injected. For some material combinations, an energy barrier is formed that will limit this injection and thereby the device performance. One way to remedy this is to include functional monolayers on the source and drain electrodes that will lower the injection barrier.
Also the gate dielectric forms an interface to the organic semiconductor and can therefore influence the device characteristics. It is known that some dielectric materials form charge traps at the interface and thereby limits the current flow. Therefore, alternative gate dielectrics such as certain types of polymers can help to improve the performance.

By stimulating an organic nanofiber-transistor with an AC voltage, localized light emission can be observed from the metal-organic nanofiber interfaces. This is the results of sequential injection of holes and electrons into the nanofiber and the subsequent electron-hole recombination leading to photon emission. The emission color is determined by the electronic band gap of the nanofiber material, and multicolor light- emission can therefore be achieved by integrating two different types of nanofibers with different fluorescence spectra onto the same transistor platform. The figure below shows emission from two different nanofibers as an overlay between the electrically stimulated light (grayscale) and a fluorescence microscope images from which the actual color can be seen.

While organic semiconductors have several advantages such as tunability combined with low price and fairly straight-forward processing on large areas, inorganic semiconductors also exhibit some appealing features such as excellent electrical transport properties. In a collaborative project with University of Hamburg, we combine these two material types to harvest the advantage of each of them to create a new hybrid device. The combination of organic and inorganic materials create a crossed interface between the nanofibers forming a hybrid p-n junction, which is characterized via advanced electrical and optical techniques. View the project page.

Organic semiconductors integrated on a transistor platform can also serve as a photodetector by converting optically generated electron-hole pairs into a measurable current. In a recently started activity, the influence of the material morphology (crystalline nanofiber vs. thin film) on the photo response is investigated. By exciting the phototransistor with monochromatic light of tunable wavelength and intensity, the spectral and photoresponsivity can be determined and correlated with the morphology.