Advances in imaging techniques and the availability of strong computational power has within the last decades led to significant progress in biomedical research and non-invasive diagnostics with the possibility to acquire 2D and 3D reconstructed images. All microscopy and tomography techniques used in biomedical imaging possess their own strengths and challenges regarding resolution, sensitivity, depth of field and contrast mechanisms. Scanning helium-ion microscopy (HIM) is very good at several of those disciplines. For that reason, HIM’s share on biomedical imaging is rapidly growing although only a few dozen instruments of this type exist worldwide, one of them at the nanoscience centre NanoSYD of the University of Southern Denmark in Sønderborg. The microscope allows us to study surface morphology with sub-nanometer resolution.

The main advantages of HIM are:

In the following we will illustrate these advantages using examples from recent research projects on cancer tissue, virus sensing, spider silk, mouse trachea, and bacteria.

Please read about technical details and how to access the instrument here.

With HIM we can image the finest structures of biological, non-conductive samples. Positive surface charges are compensated with the help on an electron gun that illuminates the surface alternately with the Helium beam. In contrast to scanning electron microscopy (SEM) no metallic coating is necessary. Hence surface properties and small details are not buried.  As an example, images of mouse trachea are shown in Figure 1. The HIM image (left) shows details of respiratory cilia without metal clusters covering the details. A SEM image of the Gold coated sample is shown for comparison (right). The metal clusters are clearly visible, and the cilia form gold induced bunches. 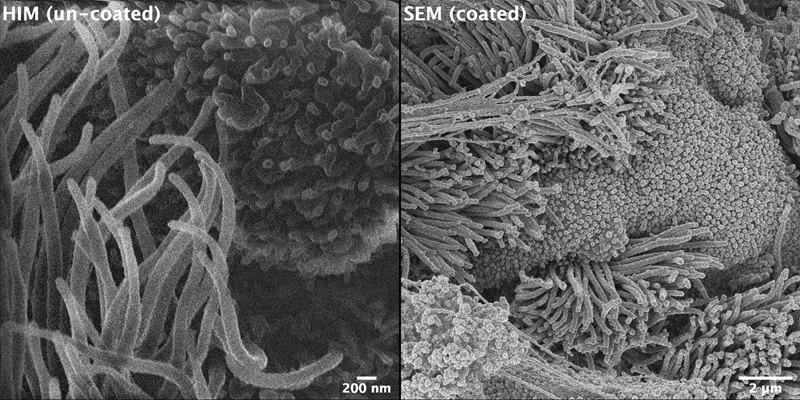 We applied Helium ion microscopy to study structural changes in animal and human tissue samples caused by cancer. Pathologists at the University hospital in Odense developed a sample preparation method that preserves the cell structures during the sample drying and fixation process. Figure 2 shows high-resolution images of a mouse kidney. Because of the superior depth of field of the Helium ion microscope compared to scanning electron microscopy (approximately 5x larger), a quasi-3D image is obtained of the structures that are oriented perpendicularly to the surface (a). In Figure 2 (b), a side wall of an individual blood vessel is shown. The morphology of the side wall is expected to change upon different diseases. With HIM we can monitor such processes. 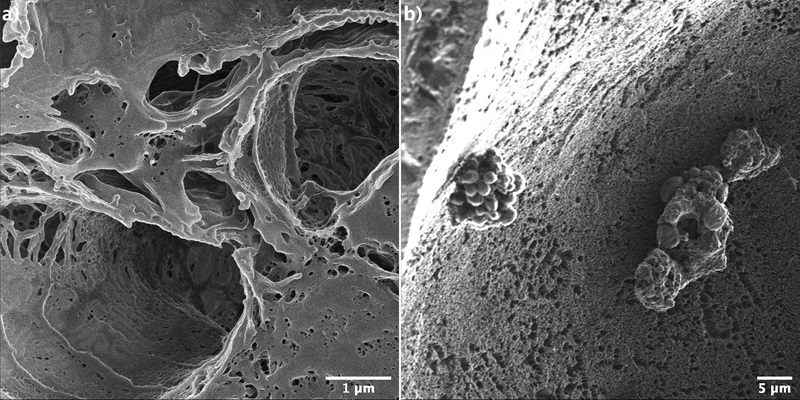 Figure 2. Helium ion microscopy images of mouse kidney tissue. The superior depth-of-field combined with the high-resolution of HIM allows us to look “inside” the smallest structures, such as the glomeruli (a) and to investigate the side walls of individual blood vessel (b).

Because of the very high resolution of HIM we are able to detect single viruses. As an example, we studied the contamination of water resources by viruses that are responsible for a wide range of human diseases. We used antibody functionalized microparticles to catch Human mastadenovirus (HAdV). This way the virus becomes isolated from the water sample for further detection and analysis. With Helium ion microscopy we imaged the particles,  Figure 3. On the left-hand side the nanoparticle is shown before it was exposed to the virus. On the right-hand side, particles have been exposed to contaminated water (b). It is clearly visible that the virus has settled on the particle surface (small bright spots) and the functionalization is working as expected. Figure 3. Surface functionalized nanoparticles before (a) and after exposition to HadV viruses (b).

The Helium ion microscope is not only an advanced imaging tool. It is also an instrument that allows in-situ nanofabrication via focused Gallium and Neon beams. For example, we can remove surface layers or make cross-sections of a sample by milling. In the following example (Figure 4), we have studied the internal strain-dependent “fine structure” of a single spider silk fiber. Initially the fiber was slightly stretched and fixated on a tape. Then, we removed the outer protein layer using a focused beam of Gallium ions. Afterwards we imaged the cuts with Helium ions. In correlative studies with additional optical measurements, we have identified the connecting structures to be ‘310-helices’. Upon applied force and elongation, they are transformed into β-sheets (coiled fibers).  These fiber strands can be seen on the right-hand side of figure 4 following continued ion milling. From such measurements the existing models of the internal silk structure can be improved which allows one eventually to fabricate artificial spider silk.