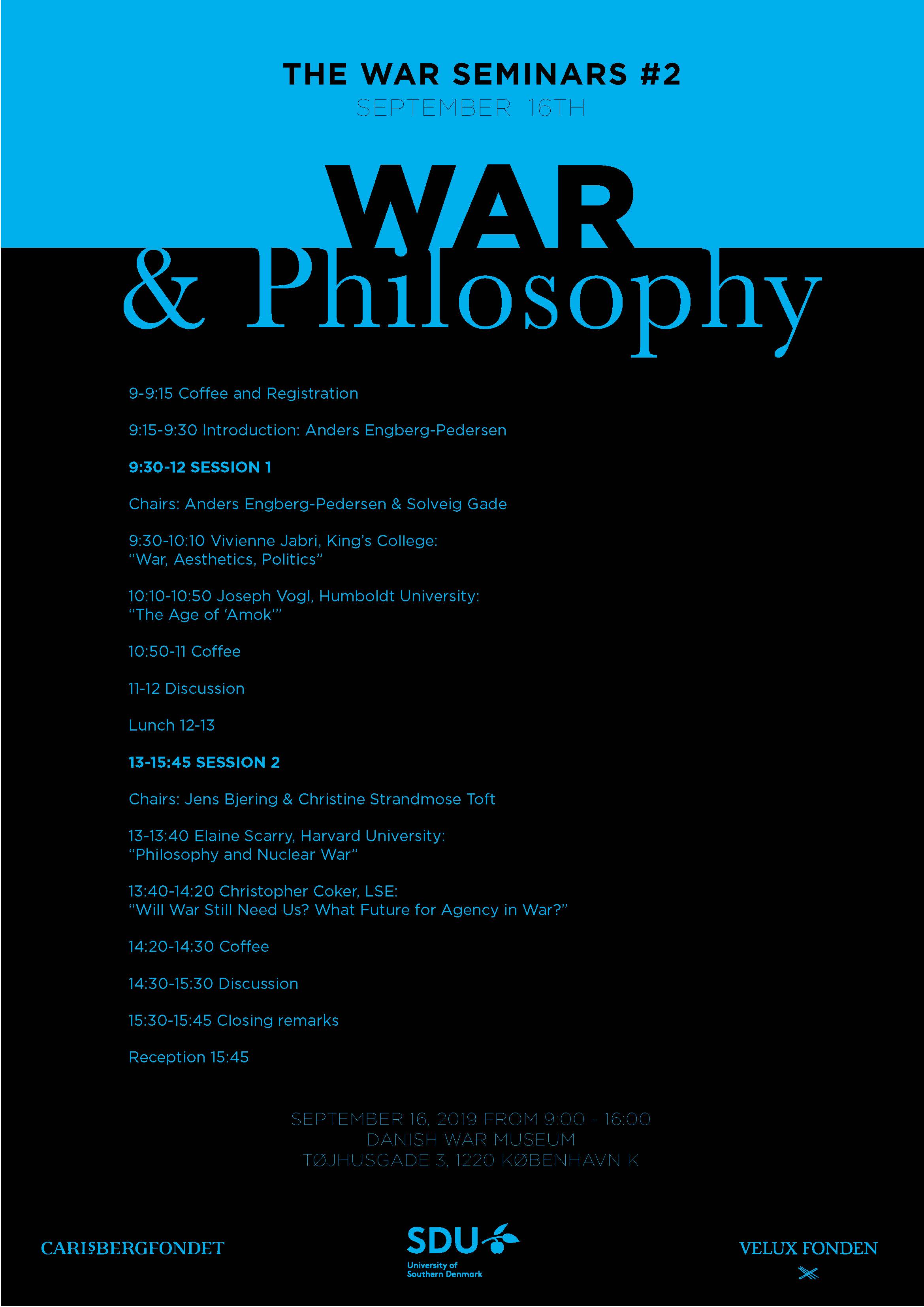 “Even war, if it is conducted with order and reverence for the rights of civilians, has something sublime about it,” wrote Immanuel Kant in his Critique of the Power of Judgment. The sentence appears almost as an afterthought to his theory of the sublime, yet for all its off-handed simplicity the quotation opens a wide range of important questions: What is war? What is order? What is reverence? What is right? What is a civilian? At a historical juncture characterized by the rapid reconfiguration of the traditional answers to Kant’s questions—through, among other things, the rampant militarization of civil life and the juridification and normalization of war—this second seminar on the culture and aesthetics of late modern warfare invites four world-renowned speakers to reflect on one overarching question: What is the relation between war and philosophy? To have a common ground for the conversation, the seminar suggests approaching this overall question from two different perspectives.

The first perspective relates to the use of philosophy as part of the war effort. From Sun Tzu’s martial Taoism in Art of War via Carl von Clausewitz’ Kant-inspired On War to the more recent introduction, noted by Eyal Weizman, of “theorists who have expanded the notion of space” to the curriculum of Western military educations, philosophical concepts have often proved amenable to militarization. This militarization naturally opens a range of important questions both concerning the real-life applicability of philosophical concepts—are they actually used, or do they merely add a sheen of intellectual authority to already ongoing developments?—and to the ethics of philosophy and the responsibility of philosophers for the application of their thinking to armed conflict. Moreover, and as noted by P.W. Singer, the militarization of concepts and ideas often happens by way of a detour through fiction. How are we to understand the nexus between philosophy, fiction, and warfare? Can fiction act as a sort of intermediate testsetting for philosophical concepts prior to weaponization and, if so, which role can and should critical (counter-)analyses from humanities scholars play?

The second perspective relates to philosophies that take war as their subject matter or starting point. From Thomas Hobbes’ use of the imagined bellum omnium contra omnes as an argument for the establishment of civil society to Judith Butler’s recent exploration of the differential distribution of precarity through the use of “frames,” war has been one of the most stubborn and fruitful sources of philosophical consideration. Yet, what can philosophy “learn” from war today? What is the relationship between specific characteristics of contemporary warfare—the fact that it is conducted remotely, that it is global, and that its mediation is both highly controlled by governments and uncontrollable through the proliferation of footage and photos online—and political and moral philosophy? And why is it that today, where Western nation states find themselves fighting a seemingly endless war, no broader public movement to end the war exists, and very few contemplate or demand perpetual peace like Kant in his 1795 essay or the antiwar movements in the late sixties and early seventies?

While each of these two parts will be discussed separately in, respectively, the morning and the afternoon sessions, it is the hope of the organizers that bringing them together under the same overall heading will reveal fruitful theoretical and analytical intersections and thus enable critical new insights into the contemporary nexus between aesthetics, warfare, and philosophy.