Is the fight against piracy over and done?

From a Danish perspective it stated in June 2007 when the Danish coaster Danica White got hijacked by Somali pirates. It was kind of a wake-up call, illustrating that piracy is not a phenomena of times long gone, but a modern form of organized crime threatening the freedom of navigation in the 21th century.

Danica White and its crew were released in August 2007 after the payment of about 723.000,- US dollars and in the aftermath of the Danica Whiteincident the Danish government and parliament decided to engage in counter-piracy in the Horn of Africa region. This means that Danish naval forces have been participating in international counter-piracy operations since autumn 2008, in recent year mainly in NATO’s Operation Ocean Shield.

The engagement in counter-piracy has not been easy. In the early years one of the main challenges was that there was not one coordinated international operation but three (CTF 151, NATO’s Operation Ocean Shield and EUNAVFOR’s Operation Atalanta) with different mandates and connected counter-piracy powers. Furthermore, some nations, for example China and Russia, were engaging in counter-piracy but without being part of any of those operations.

This meant that there was not one coordinated counter-piracy effort but different efforts not necessarily playing the same tune. One of the unresolved issues was the question of prosecution of suspected pirates arrested under counter-piracy operations. Who was willing and able to initiate criminal proceedings if there was sufficient evidence?

The answer to this question was often not easy and in a substantial number of cases naval forces seemed to practice a “catch and release” policy instead of bringing suspected pirates to justice in a court of law. That and other perceived shortcomings in counter-piracy resulted in quite some frustration not only by the shipping industry, which seemed to have felt left alone with the problem and moved towards armed private protection of merchant vessels.

The seriousness of the situation became especially clear in winter 2010/2011, when over 750 seafarers were in the hands of Somali pirates. Payments of ransom could exceed the 5 million US-dollars line and Somali pirates seemed the have become the “masters of the oceans” as UN Special Adviser Jack Lang put it back in January 2011. 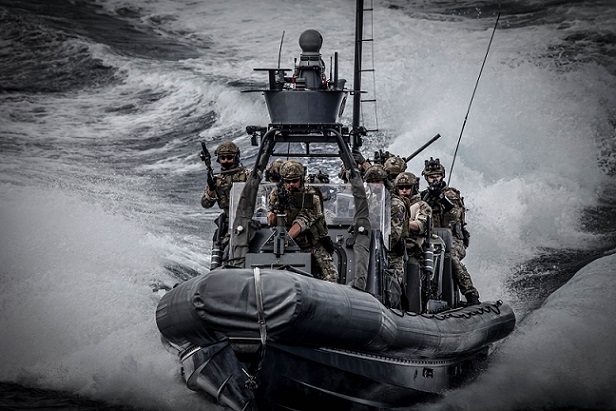 The Danish support ship L16 ABSALON in a training session North of the Horn of Africa, Photo: Forsvarsgalleriet.dk

The challenges of the counter-piracy efforts in the Horn of Africa region, however, got addressed in due course, especially under the work of the Contact Group on Piracy off the Coast of Somalia (CGPCS), where all the key players, both regional and international, engaged in the work and where willing to find pragmatic approaches and solutions instead of engaging in long and fruitless diplomatic discussions.

Also relevant non-state actors such as the shipping industry and seafarers organizations participated in this forum. One of the main functions beyond finding pragmatic solutions was trust building. Today, we can observe the fruits of this approach; counter-piracy in the Horn of Africa region is an example on a fruitful cooperation between powers, which in other contexts would not be playing on the same team or even consider any form of direct cooperation.

Somalis piracy seems to be an example of an issue where all could agree on the problem at hand and on the need to find effective answers towards it. An issue where other interests were not standing in the way for finding solutions.

And it seems that it was worth it: since 2012 no major merchant vessel has been hijacked. This is a result of a number of factors, but there is no serious doubt that one decisive factor was the improved international effort in counter-piracy. Other important factors are the self-protection of the shipping industry and also development on the ground in different regions in Somalia.

So, the situation has dramatically improved and the subsequent question is: what next? Is it all over and done and we can go home? The Danish Minister of Defense seems to have come to this conclusion this week. On Monday it was announced that the Danish naval vessel Absalon, which since September 2015 has been participating in NATO’s Operation Ocean Shield and was expected to continue until Christmas, has been ordered to abandon its participation in Ocean Shield and to join NATO’s fight against the so-called IS in the Mediterranean Sea region.

The reasons given are that Turkey has asked NATO to intensify its engagement in the Mediterranean region and that the piracy-situation has improved so much that there is no longer an immediate piracy-threat for merchant vessels in the Horn of Africa region, therefore there is no need to employ a Danish naval vessel in that region.

This decision illustrates two things: Firstly, in times where resources are tight there will be a need for prioritization. The Danish navy has been – and still is – engaged in a number of tasks. If one situation seems to be under control the focus quickly moves to the next. Secondly, it illustrates the need for an international “exit strategy” concerning Somali piracy.

It is true that the situation has changed dramatically, but the question remains whether the problem of Somali piracy really is under control and can be handled by the region itself or whether the piracy-problem is only contained and will break free again if the international focus moves elsewhere? Time will tell...

Link to this article: http://www.sdu.dk/en/Om_SDU/Institutter_centre/C_CWS/Previous+Blog+Posts+BW#hijack