Waltz of the flowers. The poppy, the bleuet, and the memory of World War I

If you travel to the United Kingdom in November, you will notice that many British proudly wear a poppy on their jacket. In contrast, in France, the atmosphere is blue, and citizens are encouraged to wear a “bleuet” (cornflower). Of course, any reader of this blog would know that this is in remembrance of World War I. But where does this tradition come from, and is the choice of different flowers another sign of a long Franco-British rivalry?

Poetic origins
First, both traditions have their roots in poetry. In France, the nickname “bleuets” was given as early as 1915 to the freshly enlisted soldiers by the veterans of the early (and bloody) fights of 1914, in reference to their clean, blue uniforms when they were joining the trenches. In the context of patriotic propaganda, the term became synonymous with the courage and bravery of the French youth, and was deemed worthy of a patriotic poem by Alphonse Bourgoin in 1916.

The poppy is also found in a poem, written by a Canadian soldier in 1915, during the infamous second battle of Ypres, during which Germany massively used poison gas. The author, Major John McRae, had to conduct a friend of his’ burial service, and it is said that later that night, he began drafting what would be later known as the poem “In Flanders Field”. 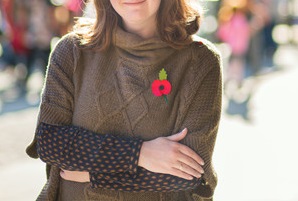 If you travel to the United Kingdom in November, you will notice that many British proudly wear a poppy.
Photo: Colourbox.com

In support of the veterans
In the UK, the Royal British legion, an organization helping wounded soldiers and veterans, adopted the poppy as an official symbol in 1921. The first ever Poppy Appeal was held that year, with the first Poppy Day on 11 November 1921. The main purpose of the Legion was straightforward: to care for those who had suffered as a result of service in the Armed Forces during the war, whether through their own service or through that of a husband, father or son. The suffering took many forms: the effect of a war wound on a man's ability to earn a living and support his family, or a war widow's struggle to give her children an education.

In France, the organization “bleuet de France” was created in 1925 by two nurses, Charlotte Malleterre and Suzanne Leenhardt, with the exact same purpose as the British legion: supporting the veterans. But the official recognition took some time: it is only in 1934 that the flowers, fabricated by veterans, were sold in the streets.

Different popularities
In the UK, wearing a poppy became wildly popular, and it is absolutely normal for citizens and politicians alike to be seen with them in the street. The poppy even became the core element of an impressive piece of art at the Tower of London last year. In France, the tradition faded away after World War II, but has been revived over the past four years. If you will see much less “bleuets” in Paris than poppies in London, French politicians now wear them at official ceremonies. But the contrast between the money collected by the two organizations is striking: while the French “bleuet de France” collected €1,1 million (DKK 8,2 million) in 2013, the Royal British legion raised €49,3 million (DKK 368 million).

Having their roots in World War I, both the Poppy and the Bleuet are symbols of organizations which have evolved to take care of all those wounded in battle in service of their country. Their different fates in the UK and France are interesting to compare in order to explore the cultural imaginary related to war, the place of veterans in society but also the legitimate authority in charge of taking care of the wounded (the state or the public?). As such, they are an entry point for studying broader questions about war, culture and politics.

Link to this article: http://www.sdu.dk/en/Om_SDU/Institutter_centre/C_CWS/Previous+Blog+Posts+BW#poppy