Written by Dea Schou, Ph.D. Student at Department for the Study of Culture

The German Czeck-born video artist Harun Farocki (1944-2014) questions the impact of digitalised warfare in his video installation Serious Games III: Immersion, now on display in the Moderna Museet in Malmö. How does a computer simulation of war respond to the real experience of war? What happens when the enemy is transformed into a computer-generated avatar? And what happens with our emphatic capabilities when we bomb our target from a safe, air-conditioned office on the other side of the world?

The film has four parts that deals with different aspects of the uses and implications of computer technology in the training and post-war treatment of US military: 1: Watson is Down (2010), 2: Three Dead (2010), 3: Immersion (2009) and 4: A Sun with No Shadow (2010). Harun Farocki has filmed the video in the city 29 palms in California, one of the largest military training camps in the US.

Farocki captures different forms of interaction between the soldiers (either in training or returning from combat) and computer simulations of virtual Middle Eastern landscapes or towns. Like a computer game the soldier is trained behind the screen back home in the US to kill terrorists. Throughout the video the images are split into two screens. Sometimes both parts show videos but most often Harun Farocki has placed comments on the one side (on a black background) next to the video. These comments either soberly describe the video, or sometimes ironically or critically interact with the images (See Fig. 2). 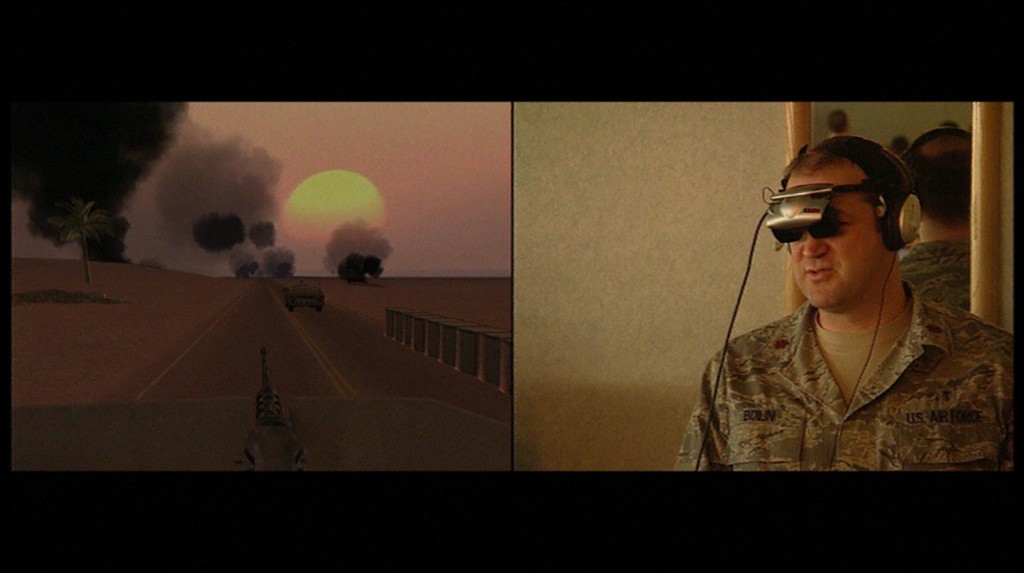 Immersion, the third Serious Games-video (and the one exhibited at the Moderna Museet Malmö), portrays how computer simulations are used in Post-traumatic Stress treatment. Here the soldier relives a Middle Eastern landscape through a virtual reality headset, which is intended to provoke traumatic memories from the war and hereby aid the soldier in his process of rehabilitation (Fig. 1). In this way gaming images seem to be both a way in and out of war – but the actual experiences of war are very far removed from the virtual simulations.

This discrepancy between the image and the reality seems to be one of the key concerns for Farocki. In the first film “Watson is down”, Harun focuses on the preparations for war and how the soldiers use computer simulations as training exercises. In this preparation programme the instructor chooses an enemy and dresses him like girls are asked to dress a Barbie girl in a kid’s video game. After he has dressed the enemy (he can choose all from burka to Adidas training clothes to a work uniform) he places the enemy different places in the landscape (See Fig. 2). These features accentuate the wish for schematic order and control of the war, while simultaneously highlighting the impossibility of full control and knowledge and the obscure and contingent aspects of real war. The war taking place in Afghanistan or Iraq is not simple or controllable, but a chaotic, terrifying and cruel event unable to prepare for at home.

This piece of work questions the mediatization of warfare and in how far the medialized image correspond to the reallife experience. Mediatization is part of war, not just a representation of the actual war, but a matrix that is part of the forming and shaping of the (imaginative) war. In this work we see the desires and anxieties connoted to warfare, governed by control, video game like combat and (the absurd) fantasies of mastery. The simulations are what Americans hope war is like. In this sense, Farocki touches upon the strongheld notion of a simple good-evil warfare and the wish for a total control, that does not correspond to reality.

Serios Games III – Immersion is currently shown at the Moderna Museet in Malmö as part of the exhibition ”The New Human: Knock, knock, is anyone home?”. It is the second chapter in a video exhibition series titled ”The New Human” about the ways in which globalization, migration, cybernetics and technologies have impacted living conditions around the world. The show is on until September 4 2016.

On youtube a small feature of the film is available online: https://www.youtube.com/watch?v=TcKL-_RtU5Y