The UN at 70- Will the UN survive another seventy years?

It is 2015. The United Nations turn seventy. Time for celebrations? Let’s take stock. What did the UN aim to achieve?

Article 1 of the UN Charter describes the purposes of the UN. They shall maintain international peace and security. The choice of words seems stunning from today’s perspective. “Maintaining” peace presupposes that peace already existed at the time. The Charter was signed on 26 June 1945, after Germany and its European allies had surrendered; however, before the Japanese Empire surrendered. Furthermore, one can surely only speak ofpeace in the sense of the absence of war and not harmonious co-existence and dignity for everyone. Did the UN “maintain” global peace during the Cold War and since then?

Article 1 continues to explain that the UN will take “effective collective measures” for the prevention and removal of threats to the peace. The UN Security Council has been called many names, but effective has not been one of them for a long time (though there are a few examples). True, collective measures have been adopted (thinking recently of South Sudan and Libya); however, regarding the amount of conflicts around the world (thinking just of the Ukraine, Yemen, the conflict between Palestinians and Israelis), these collective measures seem like the proverbial drops in the ocean.

Article 1 states the UN wants to develop friendly relations among nations based on respect for the principle of equal rights and self-determination of peoples. Self-determination remains one of the essential principles of contemporary international law. However, self-determination has probably led to more wars than any other principle of international law. Scotland’s referendum in 2014 is a positive example. If Catalonia will indeed secede from Spain after passing legislation earlier this month remains to be seen. The Spanish Constitutional Court has suspended the Catalan resolution starting the process of secession.

Article 1 also states that an aim is to achieve international cooperation in solving international problems of an economic, social, cultural or humanitarian character. Where to start with the list of failures? The Syrian humanitarian crisis is not solved collectively. 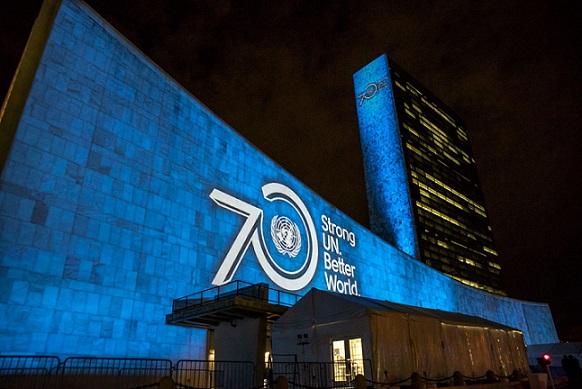 It is 2015. The United Nations turn seventy. Time for celebrations? Let’s take stock. What did the UN aim to achieve? Photo: UN.org

Failures and Successes
Of course, it is easy to be grumpy. After seventy years, the UN, or more specifically the Security Council’s structure is no longer up-to-date. It is easy to find failures. A closer look reveals success as well. The Cold War never erupted and ended relatively peacefully. The Millenium Development Goals may not have been achieved, but the results have nevertheless superseded all expectations, and the post 2015 Sustainable Development Goals are debated positively. So besides the grumbling, acclamations can be heard from time to time.

Let’s be naïve and hope that states have learned their lessons. Let’s hope that the UN will emerge stronger than ever from its celebrations. Otherwise, the next thing we will read about the only truly global forum, where issues of peace and security can be tackled, will be an obituary in the newspaper.

Link to this article: http://www.sdu.dk/en/Om_SDU/Institutter_centre/C_CWS/Previous+Blog+Posts+BW#seventy