Written by Martin Mennecke, Associate Professor at Department of Law

In 2005 UN member states agreed unanimously on their responsibility to protect (short “R2P”) to help prevent another Rwanda or Srebrenica. Ten years later there seems little to celebrate: atrocities continue in Syria, in South Sudan and in many other places.  Where does R2P stand today?

The Secretary General has since 2009 annually published a report discussing various aspects of R2P. These reports have each been prepared by the Office of the UN Special Adviser on R2P and subsequently been discussed in the UN General Assembly.

R2P and its Three Pillars
In the 2009 report the Secretary General introduced the so-called 3-pillar framework for R2P. According to its first pillar, each state has the responsibility to protect its own people against genocide, war crimes, ethnic cleansing and crimes against humanity. Thus, as point of departure, R2P reconfirms the sovereignty of each state and has a narrow scope of four specific crimes. R2P´s second pillar makes it a responsibility for all other states to assist the individual state in protecting its population against the four R2P crimes – be it through development cooperation or by encouragement. Finally, by way of R2P´s third pillar states have agreed to take collective action, in accordance with the UN Charter, to protect the population if the relevant state manifestly fails its responsibility. This can include measures such as the adoption of an arms embargo, a referral of the situation to the International Criminal Court or the authorization of military means by the UN Security Council. 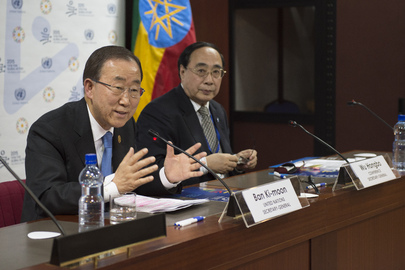 R2P, Prevention and Armed Intervention
This framework is by now widely accepted and regularly cited by member states. Prevention is the agreed core of R2P and all three pillars can contribute in this regard. In crisis situations, the third pillar gives most easily rise to discussions, as it involves an international response to what once by many was deemed exclusively domestic affairs. The most prominent – and eventually most controversial – application of R2P´s third pillar was NATO´s intervention in Libya in 2011. Much went wrong since then in Libya, and this has raised questions about the sustainability of R2P interventions – but it is as important to recall that R2P helped to galvanize the international community to prevent mass killings in Benghazi. Even more importantly, since 2011, R2P has in practice shown that it consists of much more than military force – indeed R2P-inspired armed interventions as in Libya or more recently on behalf of the Yezidis in Iraq remain the exception.

The 2015 Report by the Secretary General on R2P
In his new report, the UN Secretary General takes stock of ten years R2P. He does that in a frank manner, criticizing the failure of the international community in for example North Korea and Syria. He recommends that permanent members of the Security Council exercise restraint in regard to their veto power in situations where R2P crimes are at stake . This view seems immediately agreeable when one thinks of the Russian vetoes in regard to Syria or more recently with regard to the anniversary of the Srebrenica genocide – but a potential veto restraint raises complicated questions about who should decide when indeed R2P crimes are “at stake.”

In regard to the three pillars, the Secretary General makes a number of well-taken suggestions what member states should do in order to make R2P a reality – and not just a promise. And yet again, for UN standards, the report contains some rather direct criticisms. Amongst others, the Secretary General calls on governments to fight impunity, as accountability is an important factor in building resilient societies and deterring potential perpetrators. In that context he speaks out against immunities for high-level officials and regrets, without mentioning any names, the lack of cooperation of certain states with the ICC. These are thinly veiled references to recent moves by certain African governments.

The Future of R2P
The main message of the 2015-report is to focus on further operationalizing R2P by mainstreaming it into the various policy areas where R2P can make a difference. As idea R2P already has made its way – there are few who today would question the idea of a shared national and international responsibility to protect people against atrocities. The challenge lies in translating R2P into practice and doing so across the board. The report makes concrete proposals and directly addresses the role of various actors. This includes UN organs and member states, but also regional organizations such as the European Union, which already does many things in the area of conflict prevention – but has little specific focus on R2P and the characteristics and dynamics of R2P crimes.

One particular means to advance the implementation of R2P is to assign a senior government official to act as focal point for R2P. In that capacity he/she can facilitate national or regional efforts to mainstream R2P into relevant policy areas. The Secretary General encourages states to appoint such focal points and to develop national strategies on how to best work with R2P in practice.

Denmark and R2P
R2P stands for an integrated, whole-of-government approach to protecting human rights and reflects a strong commitment to international law and the United Nations. As a consequence, Danish governments have strongly supported R2P since its adoption in 2005. Over the coming twelve months Denmark will hold a unique position from which to help the implementation of R2P, as former foreign minister Mogens Lykketoft from September onwards will be the first Danish President of the General Assembly of the UN.

Denmark has over the past years developed an internationally recognized R2P profile by focusing on how to use R2P in practice – in particular in regard to Danish development cooperation, human rights issues and its work at the United Nations. A key project in this regard is an ongoing mapping exercise of Danish efforts under all three R2P pillars. This material will provide an overview of R2P and Denmark and help identify priority issues.

The new UN report on R2P raises also questions Denmark needs to address. For example, it points out that so far too little has been done to prevent R2P crimes from reoccurring in those countries that have just emerged from an R2P crisis. How can Danish development cooperation better accommodate such R2P risks? The report also highlights the need to better integrate R2P into UN peace operations, as they often are mandated to protect civilians in settings with high risk for R2P crimes. Given the renewed Danish interest to contribute to UN peacekeeping, Denmark will need to train and equip soldiers accordingly. 2015 as R2P´s Anniversary Year
At the United Nations, anniversaries develop their own dynamics. In April 2014, for example, the Security Council adopted a stand-alone resolution on the prevention of genocide, reaffirming R2P, on the occasion of the 20th anniversary of the Rwandan genocide. This year will see efforts to adopt a similar resolution reaffirming R2P in the UN General Assembly. In addition, member states will discuss the state of R2P in the Assembly in early September and return to these questions when marking for the first time the newly proposed International Day of Commemoration and Dignity of Genocide on 9 December. But one thing already stands clear: what will really matter at the end of this anniversary year is that more states work on R2P.