Protection of minorities in Crimea and obligations of international law

Written by Ulrike Barten, Postdoc. at Department of Law

Vladimir Putin recently explained his actions in Crimea in the spring of 2014. He explained that once Victor Yanukovych was ousted from his office of president, the Crimean Russians could not be left to whims of fate. They had to be protected – if they so wished. This wish was, from Putin’s point of view, clearly shown with an overwhelming majority voting for integration with Russia in the March 2014 referendum in Crimea. Putin, however, also admitted that plans for ‘the return of Crimea’ were ready weeks before the referendum. With this statement, he returns to a very early justification of Russia’s action in Crimea: protection was simply necessary.


Protection of minorities
Putin uses a well-known rhetoric in the field of minority protection:  the kin-state felt responsible for the protection of its minority in another state. The protection, however, must always  comply with the general rules of international law concerning friendly relations and cooperation with other states. A perceived heightened need for protection of its minority does not justify breaches of the general principles of international law such as the breach of theprohibition of the use of force and the breaches of the sovereignty and territorial integrity of another state. Only five days after Yanukovych had fled Kiev, the little green men – so called because of their green attire without any military insignia – arrived in Crimea. It was in no way clear that the happenings in Kiev posed a direct and immediate threat to the Russians in Crimea and even if that had been the case, no attempts of peacefully addressing the issue were recorded. 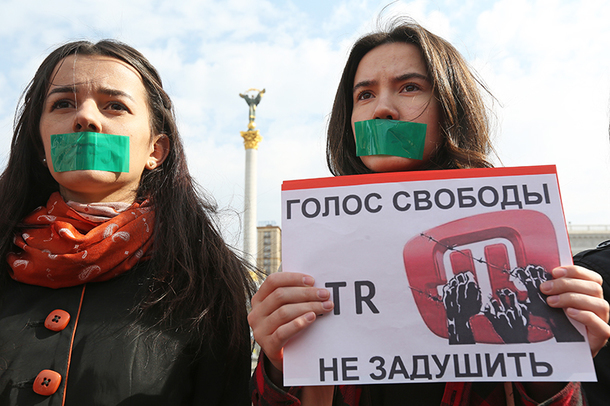 The pro-Ukrainian Tatar TV station ATR closed on 1 April 2015 after its license was not prolonged by the pro-Moscow authorities. The photo is from a rally to support the channel on Kyiv's Independence Square on March 28. Photo: Volodymyr Petrov.

The protection of Russians abroad
Even the doctrine of protecting nationals abroad is not a reliable basis for Putin. Firstly, the doctrine itself is disputed and far from accepted as a general rule of international law. Secondly, even though there were reports about Russian passports being distributed in Crimea several years ago, it seems that most persons with Russian origin in Crimea held Ukrainian passports and were thus not Russian nationals at the time of the invasion. Whereas this may have changed, at the time of the invasion, Putin would have to have relied on the ethnic and cultural affiliations of ‘the Russians’ in Crimea; an extension with no grounds whatsoever in the doctrine.

Thirdly, in the instances where nationals were indeed protected abroad, the nationals were rescued and evacuated. The foreign troops did not take over official buildings such as was the case with the parliament in Simferopol. Establishing a military presence is akin to a military intervention – precisely what is not envisaged by the doctrine.

Protecting minorities now – The Crimean Tatars
If Putin is concerned with the protection of (perceived) vulnerable groups, his treatment of the Crimean Tatars is mildly termed puzzling. To name but one example, the pro-Ukrainian Tatar TV station ATR closed on 1 April 2015 after its license was not prolonged by the pro-Moscow authorities. Also the Tatar news agency QHA did not receive a license.

Russia is party to the Framework Convention on the Protection of National Minorities. Art. 5 obliges the state to promote favourable conditions so that members of national minorities can maintain and develop their culture and traditions. Art. 6 speaks of tolerance and intercultural dialogue among all persons living in a state’s territory – particularly in the fields of education, culture and media. By effectively shutting down Tatar media, Russia is not living up to its obligations.

Putin’s legal cul-de-sac
Putin is in a legal cul-de-sac. Russian action in Crimea prior to the referendum cannot be considered legal as the minority rights regime does not allow for breaches of international law and the doctrine of protection of nationals abroad was either not applicable at all or it was abused when the Russian military permanently established itself. The argument of invasion by invitation, in other words the deployment of Russian troops after the March 2014 referendum, lacks credibility as the referendum itself is widely seen as not upholding the standards of international law. With the effective control over Crimea, Russia now has obligations vis-à-vis the Tatar minority.

It will be difficult for Putin to leave this cul-de-sac. At the same time, he does not seem to want to leave it. Who knows, time could prove him right. International law has a somewhat uneasy tendency to convert cul-de-sacs into ongoing streets. Crimea and the Tatars would then simply be roadside stops in Putin’s quest for Mother Russia.