@pontifex and the responsibility to protect

I was at the 9th Pan-European Conference on International Relations, having  a delicious lunch by Taormina’s seaside with a former colleague, when my twitter account notified me of a new trend among my contacts: the International Coalition for the Responsibility to Protect (ICRtoP) conveyed gratitude to @pontifex (Pope Francis) for expressing support to the Responsibility to Protect principle (R2P) (see image below for the original tweet). Gotcha! - I thought - three separate lines of my research agenda reunited in one tweet! 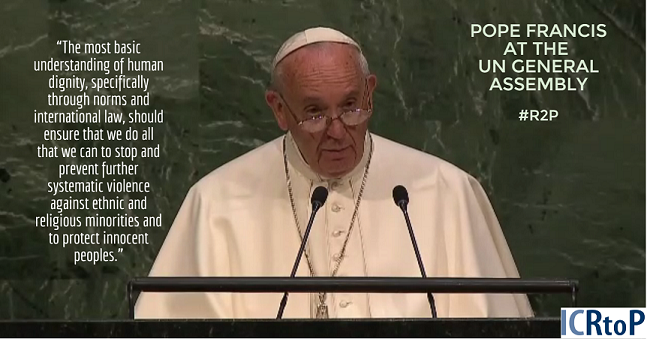 1: Religion and diplomacy
When the Pope gives speeches at the United Nations, he is there not as the head of the Vatican, but as the so-called ‘Holy See’. In fact, the Holy See is the Pope’s diplomatic service, which dates back to the beginnings of the Permanent Diplomatic Missions, when the modern State started rising. Despite being born as an international actor together with the mythical Westphalia System, the Holy See has not received much scholarly attention in the discipline of IR. The post 9/11 disciplinary focus on religion and culture has attracted increasing interest also in the Catholic Church, but studies attempting to understand specifically how the Holy See acts at the international level are still very few. On the basis of its long diplomatic history, the Holy See – not the Vatican State – was made a ‘Permanent Observer’ at the United Nations in 1964. This is also the reason why a practice has been established at the UN to invite the Pope regularly to give speeches to the General Assembly. From John Paul II on, the Holy See has interpreted such invitation as an occasion to ‘serve the needs of the human family’, something the Holy See believes it can do that because the Pope is an ‘expert in humanity’. As an academic, I find it fascinating that an essentially partisan actor such as the Pope can define its international political agenda in cosmopolitan terms and I believe research is needed to go beyond the official Catholic rhetoric.

2: The social media
My fascination with the Holy See has increased since the Pope has become present on the social media. The first tweets by the then Pope Ratzinger stirred more or less serious discussions in the blogosphere, but what it is still to be understood is how @pontifex links to the diplomatic role of the Holy See. After all, it is the Catholic Church that ran the first fully-fledged form of propaganda and the very word ‘propaganda’ comes indeed from the Church’s ‘Propaganda Fide’. This is a Department (Congregation) of the Holy See, founded in 1622 by Pope Gregory XV, in charge of the missionary activities of the Church and recently renamed ‘Congregation for the Evangelization of Peoples’ by Pope John Paul II. So, in a way it is not surprising that such an old institution, having survived the rise of the mass media, it is now showing to be able to adapt to the new media ecology. Pope Francis seems more at ease on twitter than his predecessor, but in his new encyclical, Laudato Si, he also expresses worries for the omnipresence of the digital world that leads to ‘a new type of contrived emotion which has more to do with devices and displays than with other people and with nature’. Thus, what kind of media actor is this Pope? And what does his on line presence mean for his diplomatic role? Is the Pope’s diplomacy strengthened or diminished? Is it expanded or narrowed down? Is it more personal, emotional and open or more hypocritical?

3: Protection of the innocents
The abovementioned ICRtoP’s tweet is interesting also for at least two more reasons, both related to R2P. First, ICRtoP publicly co-opted the Pope as a R2P entrepreneur. It quoted a piece of the Pope’s speech at the UN General Assembly on September 25th where actually the Pope quotes himself, or better a letter he had sent to the Secretary-General of the United Nations on 9 August 2014. In that letter he had argued that ‘the most basic understanding of human dignity compels the international community, particularly through the norms and mechanisms of international law, to do all that it can to stop and to prevent further systematic violence against ethnic and religious minorities’. ICRtoP is most probably not misinterpreting the Pope, but it is attaching to that statement a political goal – support to the specific R2P norm – that was not necessarily intended. It will be interesting to see if ICRtoP is right and the Pope has indeed started promoting R2P or not. Second, the Pope’s reference to the ‘responsibility to protect’ is interesting because if we read his full discourse, we can clearly see that he is linking R2P to the refugee crisis and to the Agenda for development. In fact, the word ‘dignity’ first appears in his speech with a reference to the men and women that want ‘to escape from extreme poverty’ and whom should be allowed ‘to be dignified agents of their own destiny’, while later on he explicitly mentions the crisis in the Mediterranean. Willingly or unwillingly, the Pope created a significant connection between R2P and displacement – a connection that is maybe obvious for those of us who study R2P, but that has been almost absent from the official statements of European policy makers in the last few months.