On what grounds…? Challenging the prospects of Danish forces carrying out air-strikes in Syria

Written by Frederik Harhoff, Professor, LL.D. at Department of Law

In September 2014, the Danish Parliament approved the Government’s proposition to send four F-16 jet fighters (+ 3 in reserve) to contribute to the US-led international coalition’s fight against IS in Iraq. While US air fighters were targeting IS positions on both Iraqi and Syrian territory, however, the Danish jet fighters were limited to carrying out strikes on Iraq’s territory only. The reason for this limitation was that the Iraqi Government had officiallyinvited Denmark to assist, along with Iraqi and coalition forces, in the fight against IS in Iraq; in fact, this was highlighted as the very legal basis upon which the Danish aircraft were deployed. The assumption was that carrying out airstrikes across the border from Iraq into Syria, short of a UN Security Council resolution or an invitation (or consent) by the Syrian Government, would have been a violation of Syria’s sovereignty and territorial integrity and therefore unlawful under international law.

During the debates at the official opening of the Danish Parliament on 6th October 2015, the Danish Prime Minister announced that Denmark was in the process of withdrawing the Danish F-16 fighter jets and the Danish crew from the base in Kuwait from which the Danish aircraft had carried a number of air-strikes against IS positions  in Iraq. The jet fighters, he explained, had to be taken home for maintenance and repairs and the crews needed rest and upgraded training.

The Prime Minister also announced that the Government was favorable to redeploying the Danish aircraft to Kuwait next year to join the fight against IS, if this was still required by the Iraqi Government and the Coalition. However, the Prime Minister added, the Danish Government would then be open towards an expansion of the mandate for the Danish jet fighters to allow them to also target IS positions in Syria. 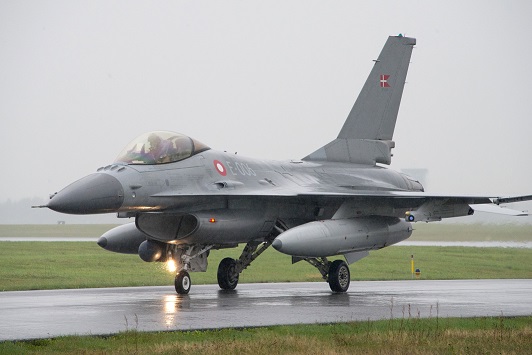 After a year of fighting IS the Danish F-16 jet fighters are returning to Denmark. Photo: Defence Command Denmark

France, who is also a member of the Coalition and whose jet fighters, just like Denmark’s, had only operated on Iraqi territory, had just a week earlier announced that their jet fighters, would now also start bombing IS targets in Syria which, in fact, they have. Other coalition partners have recently taken a similar course.

The legal basis for this shift in France’s position, apparently, was that France had gathered reliable intelligence about an imminent IS attack against targets in France and more broadly that France considered it lawful, under international law, to launch air-strikes in collective self-defence against IS targets in Syria in order to prevent IS from attacking Iraqi forces and civilians and historic monuments in Iraq from their positions in Syria.

The Danish Prime Minister’s announcement about the possible expansion of the Danish mandate to also cover IS targets on Syrian territory appears to represent a shift from the Government’s reliance upon Iraq’s invitation as the international legal basis for the armed operations on Iraqi territory towards the argument of collective self-defence.

The right to self-defense is primarily designed to allow a State to use armed force against another State in response to an armed attack by the latter. However, the right to self-defence is slightly different when it comes to a situation of the use of force against a non-State actor (“a terrorist organization”) in response to armed attacks by such actor against its territory or its forces abroad. Under international law, a State may indeed strike back in self-defence against terrorists in such cases, but only on certain conditions.

A State may apply preemptive strikes against terrorist positions on the territory of another State if an anticipated attack from such positions is instant, overwhelming, leaving no choice of means and no moment for deliberation, and in such cases only if the host State is either unable or unwilling to do control the terrorist organization itself and prevent it from launching attacks or armed raids from its territory towards other States. In such cases, moreover, the self-defending State(s) must report the action immediately to the Security Council under Article 51 of the UN Charter. In any case, a self-defending State is probably required to direct its preemptive strikes against the positions from which the imminent terrorist attack is expected and cannot randomly attack terrorist positions everywhere without risking infringements of the sovereignty and territorial integrity of the host State.

States may use other avenues to gain the necessary legal ground for directing attacks against terrorist targets within the territory of another State. If the host State has given its consent to have the counter-attacks carried out within its territory, of course, there is no legal argument against the lawfulness of such attacks. In this case, however, we find ourselves logically beyond and outside of the right to self-defence; the same goes for the possibility of the Security Council’s approval under Chapter VII of the UN Charter to UN member States to use of the necessary force to secure or restore international peace and security.

It remains to be seen which legal basis the Danish Government will refer to if the Danish aircraft are indeed re-deployed to Kuwait/Iraq next year and, in that case, whether the Government is able to convince the Parliament that Danish strikes on IS positions in Syria are necessary in self-defence on behalf of Iraq in order to preempt instant and overwhelming IS attacks without any choice of alternative means and no moment for deliberation. If so, we should not forget to notify the Security Council!