Trading with the enemy. France, Russia, and the “Mistral” embarrassment.

After lots of drama, France finally cancelled the sale of two Mistral-class amphibious assault ships (LHD) to Russia last week. Unsurprisingly, this announcement was aggressively criticized by opposition groups, notably members of the conservative party “Les Républicains” and the far-right movement “Front National”, who generally accused the socialist government of “betraying” French’s interests and “bowing” to American pressures. A look at the French political culture, aspects of which are particularly permeable to Russian propaganda, is necessary to explain the hysterical reactions this announcement triggered.

Talks between France and Russia about the possible purchasing of four LHDs began in December 2008, only a few months after the Georgian crisis and the signature of a poorly negotiated ceasefire (because of its unenforceability and thus constant violation by Russian troops) by French President Nicolas Sarkozy. Already back then, several personalities, including the chief of staff of the French armed forces and the military advisor to the French President, advised against the sell to Russia out of concerns about future Russian behavior and the diplomatic risks entailed to antagonizing NATO allies. In fact, several NATO members highlighted the wrong diplomatic signal of seemingly forgetting the reckless Russian behavior in Georgia, and emphasized the risks to the alliance brought by the technological transfers included in the deal and the increase of the Russian armed forces’ projection capabilities. 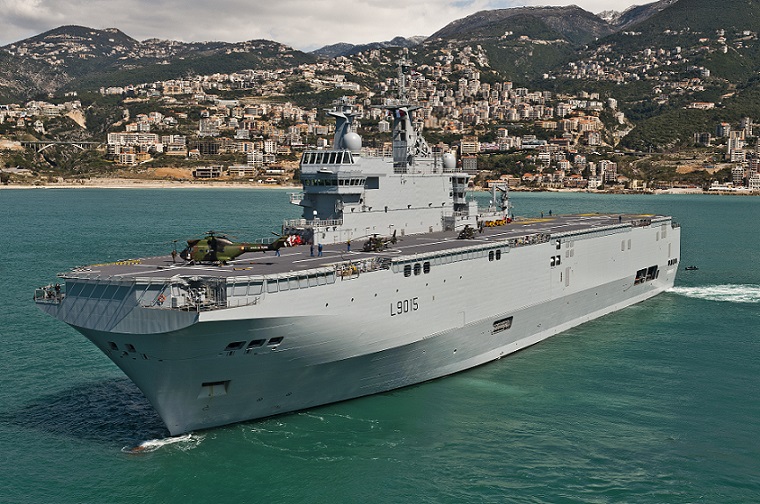 Yet, the deal was presented as “realistic”, primarily because it could save employment at the St-Nazaire shipyards, and because it was supposed to be in French interests to keep a strong relationship with Russia, “an important international actor”. However, as critics had predicted, the West-Russian relationship grew increasingly antagonistic, in particular since President Putin’s rebranding as the “defender of conservative values” that followed the 2011-2012 protests in Moscow, and culminated with the Ukraine crisis unfolding since 2014.

The French government was then tied with a commercial deal signed by its predecessor, selling arms to a country which directly threatened European security by violating a key tenet of the post-Cold War security architecture, had clearly designed NATO as its arch-enemy in its military doctrine, and ideologically positioned itself as opposed to everything the West is supposed to represent, for example in terms of gender equality or LGBTs rights. In such a situation, it seems commonsensical to try minimizing the damages, as the French government did by cancelling the sale, thus avoiding to expose cracks in NATO’s common position about Russia and negotiating a deal that prevents the involvement of an international commercial arbitration court.

Clearly, considering the security and diplomatic risks involved, the sale was a bad idea in the first place, and cancelling it while minimizing the unavoidable costs to the French economy was the sensible way to go forward. Yet, accusations of treason and obedience to the United States’ orders were quick to flow from the conservative side of the political spectrum, but also from the far-left, polluting what should be an important debate about French national security and alliance preferences.

In the wake of the Ukraine crisis, several French politicians from all sides of the political spectrum have voiced their “understanding” or even their “support” for Russia's actions, thus contradicting the French government's official position of implementing sanctions against Russia. Such “understanding” went as far as 10 members of parliament travelling to Crimea and supporting the Russian invasion, and a surreal debate taking place in the French national assembly during which MPs from the far-left, allied with the far-right and some conservative MPs, resisted the wording “power politics” in order to characterize Russian actions, on the ground that poor Russia is only defending itself against American destabilization attempts and NATO’s aggressive expansion.

Several aspects of the French political culture explain such a sympathy for the Russian behavior. First, the "anti-imperialistic" (read "anti-american") posture shared by the far-right, the far-left and some neo-Gaullists inclines some politicians to be favorably disposed towards any actor perceived as challenging the United States, no matter how destabilizing or dangerous for Western (and French) interests this actor may be.

Second, French political culture is marked by a “savior myth” and a fascination for strong leaders seen as being able to concentrate powers and defend sovereignty. Usually named “jacobinism”, in reference to the centralization of power initiated during the French revolution, this aspect of French political culture spans the political spectrum. In that regard, Mr. Putin’s discourse about the creation of “vertical of power” in Russia and his portrayal as the “good tsar” whose historical duty is to tame the “bad boyars” meets favorable grounds, especially in a context of disappointment towards Mr. Hollande. Finally, the Russian discourse of political conservatism, anti-liberalism and defense of traditional values meets favorable societal tendencies, for example illustrated by the rise of the “Front National”.

This combination of factors explains the odd alliance of neo-communists, self-proclaimed Gaullists, traditional conservatives and far-right supporters that is now publicly defending Russia, and the hysteria with which the decision to cancel the sale to Russia was met (moderate political discourse is usually not the primary characteristics of such political movements). It is also no surprise that Russia has built links with such groups, for example financing the “Front National”.

The encouraging aspect is that for all its aggressiveness and visibility in public space, this discourse remains somehow marginal, as according to asurvey conducted by the Pew Research Center, 70% of the French population has a bad image of Russia. Yet, the hysteria over the Mistral non-sale illustrates the gradual radicalization of the French political scene, and the increasing difficulty to have a mature discussion about French foreign policy. A situation unworthy of a nuclear state, permanent member of the UNSC and one of Europe’s main military power.