Written by Anders Engberg-Pedersen, Associate Professor at Department for the Study of Culture

In 1813, after two victorious battles, one of Napoleon’s armies arrived in Silesia. The advance into new territory quickly put the army in a predicament. Napoleon’s chief cartographer and strategist, Bacler d’Albe, wrote back from the front to the Dépôt de la guerre – the central military map depot in Paris:

We have now arrived in Silesia. I am truly in a difficult situation; no supply wagons, no maps! I understand nothing of this maneuver. This damned supply wagon, it will arrive after the war is over! Send me with the greatest speed a part of the area between Dresden and the Niemen river. [ . . . ] I want the part to cover all of Silesia and the Oder River until Kustrin. The rest of the map of the North and the East can arrive later; the essential thing is to have Silesia. The major general must have ordered you to engrave the map he found this winter; if we have it here, now is the time to use it! Get us out of this mess and send it quickly by courier, cut it into transportable pieces if necessary.

Two years later, on 18 June 1815, the Battle of Waterloo brought an end to Napoleon’s reign and to over twenty years of pan-European warfare. Until then, Napoleon had been the seemingly invincible champion of a technology of war that had now become the sine qua non of large-scale warfare: the military map. Spurred by Napoleon’s efforts, the period around 1800 witnessed an explosion in the production, dissemination, and use of cartography. As Bacler d’Albe’s frustrated letter reveals, the commanders were deeply reliant on the detailed topographical knowledge that a map could offer. 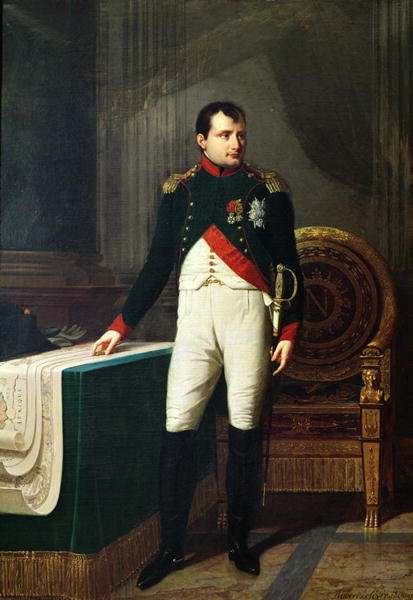 Portrait of Napoleon (1809) by the painter Robert Lefèvre

The rise of military cartography was due to a confluence of number of factors: a strong state power with the finances and other means to carry out the major undertaking of mapping large territories; the development of the method of triangulation that resulted in far more accurate measurements; a solid bureaucratic organization; the levée en masse or draft that led to a vast increase in the size of the French army and its subsequent reorganization; and the imperial aspirations of Napoleon. Earlier, military maps had been used by Caesar and Agrippa and promoted in the military treatises by Flavius Vegetius and Machiavelli, but the maps were of poor quality and secondary to the topographical knowledge offered by local guides. Around 1800, however, we witness how an advanced, symbolic technology for the first time came to pervade the art of war. In other words, the Napoleonic Wars effected a not insignificant media event: the management of a military empire had become dependent on its symbolic double, on the extensive production and organization of an empire of paper. Already then, actual and virtual warfare could not be separated.

The effects of this media event were varied and profound. Antoine-Henri Jomini, the Swiss military thinker, who for a while served under Napoleon, developed a cartographically inflected theory of war and went so far as to claim that “strategy is the art of waging war upon the map.” Georg Heinrich von Berenhorst, a Prussian soldier and writer, claimed that the officers should themselves be mediatized: in the absence of maps they should be able to project triangles and other geometrical figures directly onto the terrain, in order to transform it into a legible and manageable mental map. As he put it, the inside of the officer’s skull must be “wallpapered with maps.” Topographical maps were further adopted by the inventors of the modern war game, with which aspiring officers could simulate multiple scenarios in a virtual war so as not to commit egregious blunders on the battlefield itself. On the other hand, various literary works engaged in a critique of cartographic representation, pitting narrative sequence against the static order of the map and its tantalizing promise of omniscience, visibility, and control.

Such critique, however, did not prevent the leading military powers of the time from engaging in a kind of media armament. Russia, Austria, Prussia – all established and developed cartographic centers and corps to keep up with Napoleon’s stock of maps. Parallel to the military struggle, to warfare proper, there emerged a knowledge war, a conflict over symbolic representations. The sentence, “A detailed map is a weapon of war,” has been ascribed to Napoleon, and while it is probably apocryphal, the bureaucratic measures undertaken across Europe show that this was fully the way maps were perceived and used.

Ideally, the doubling of space should facilitate the conquest of enemy territory, but the opposite was also the case: invasion allowed for the conquest of the enemy’s maps. Entering Berlin in 1806, the French Army found maps and copper plates belonging to the military academy of Berlin in the collections of various merchants, and ordered them packed along with most of the Prussian map collection and sent to the Dépôt de la guerre. The favor was returned first by the Russians in 1812 and then by the Prussians and Austrians, who emptied the Dépôt in 1814. The latter were less fortunate, however, for most of the important maps that had not perished in 1812 or 1813 were now on Elba.  Forced into exile, Napoleon had taken them with him.