”The Kremlin is not a court of law”

In response to EU sanctions – asset freezes, visa bans and other restrictions – towards certain listed individuals and entities benefitting from or being involved in the crisis and quite possibly armed conflict in the Crimea and the eastern Ukraine, Russia decided about a year ago to ban importation of a range of EU agricultural products.


The European Commission has various ways to alleviate the effects on EU farmers, but more importantly from an international law perspective the Russian restrictions can be brought before the WTO dispute settlement system – indeed such a step was recently taken in response to a Russian ban on imports on meat from pigs.

If the case is brought before the WTO - following a court-like procedure – the EU might eventually be granted the right to “answer in kind” and suspend obligations towards Russia until Russia withdraws the disputed restrictions. And what is the difference between the EU sanctions, the Russian restrictions and a possible “answer in kind”? From the perspective of international law the crucial difference is that in imposing the original sanctions the EU did not breach other international obligations towards Russia. Russian restrictions on the other hand are contrary to Russia’s WTO obligations. Should the EU prevail in a case before the WTO, EU suspension of obligations - which in effect would be comparable to the Russian restrictions – would nevertheless be legal because and in so far as they are taken within the system set up in the WTO. 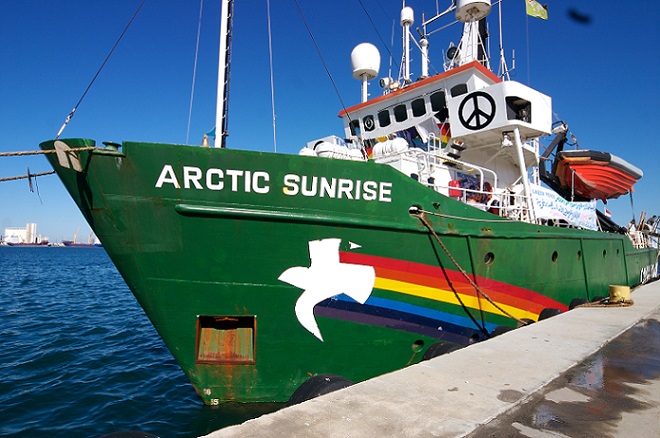 Russian authorities breached a number of provisions when they boarded, seized and detained the Greenpeace vessel Arctic Sunrise in 2013. Photo: "Arctic Sunrise in Libya 1" by Salvatore Barbera.

On 19 December 2013 Russian authorities boarded, seized and detained the Greenpeace vessel Arctic Sunrise - flying the flag of the Netherlands - and subsequently towed the vessel and its crew of 30 to Murmansk. The vessel had been used to stage a protest in the Russian Exclusive Economic Zone at a Russian offshore oil platform in the Barents Sea. The crew was arrested, released on bail in November and granted amnesty by the Russian State Duma just before Christmas. As flag state the authorities of the Netherlands brought a case before the Permanent Court of Arbitration claiming that Russia had acted contrary to obligations under the United Nations Convention on the Law of the Sea. Russia did not participate in the proceedings. The Court concluded that Russia had breached a number of provisions and that therefore the Netherlands are entitled to compensation for damage to the Arctic Sunrise, including physical damage to the vessel and non-material as well as material damage to the crew.

These two examples show that Russia – and other states as well – by virtue of being bound by international obligations can no longer “do as they please”. Action contrary to international law may entail international responsibility, countermeasures and compensation – following procedures specific to the particular area of international law.

At a conference on international law a few weeks ago it was anecdotally recounted that new employees in the Finnish Ministry for Foreign Affairs on their first day of work are traditionally instructed to remember that “the Kremlin is not a court of law”. Apparently this goes back a long time. Historically Finnish/Russian relations have frequently been strained, and at times more than merely strained. Finland used to be an autonomous part of Czarist Russia – the Grand Duchy of Finland - maintaining a measure of independence. Following the Russian revolution and civil war Finland gained her independence in 1917. At the conference a special point was made of the way prominent Finnish lawyers and politicians used international law in the struggle for maintaining autonomy and arguing for independence. This led to the comment by another colleague that even if the Kremlin is not a court of law “you are to treat it as if it is”. In sum: Legal arguments matter.