From Capture to Kill: Review of Gavin Hood’s Eye in The Sky

Written by Andreas Immanuel Graae, Ph.D. Student at Department for the Study of Culture

Last week, the riveting military thriller Eye in the Sky hit Danish cinemas like a scream across the sky – leaving the audience in a moral dilemma equal to that of modern remote warfare. Should the commanders in the war room risk 80 civilian lives because of one collateral damage – even if it is a sweet little girl in a hula-hoop? This brutal assessment based on all too rational statistics of potential deaths would not be possible without the high-tech drone vision dominating the movie – an enhanced visibility evaporating the last remaining banks of war fog. And this encounter between high-technological visual omnipotence and fatal lack of human decision power is exactly what Eye in the Sky so brilliantly demonstrates.


It begins with an operation to capture, not kill. Colonel Katherine Powel (Helen Mirren) receives intelligence that a British born Al-Shabab terrorist leader, whom she has hunted for years, is meeting with other most wanted terrorists in a house in Nairobi. The American drone pilot (Aaron Paul) is her “eye in the sky”, local special forces is ready to engage, while the political top and a British general (Alan Rickman) follow the war theater from a screen.

However, the situation suddenly changes when the terrorists unexpectedly move to an Al-Shabab controlled location where capture is no longer possible. Furthermore, using a tiny drone about the size of an insect, a local agent discovers a bunch of explosives and suicide vests in the house indicating the planning of an immediate attack. The operation has now changed, as Powell states with the words of Barack Obama’s official anti-terrorist doctrine, “to kill rather than capture”. 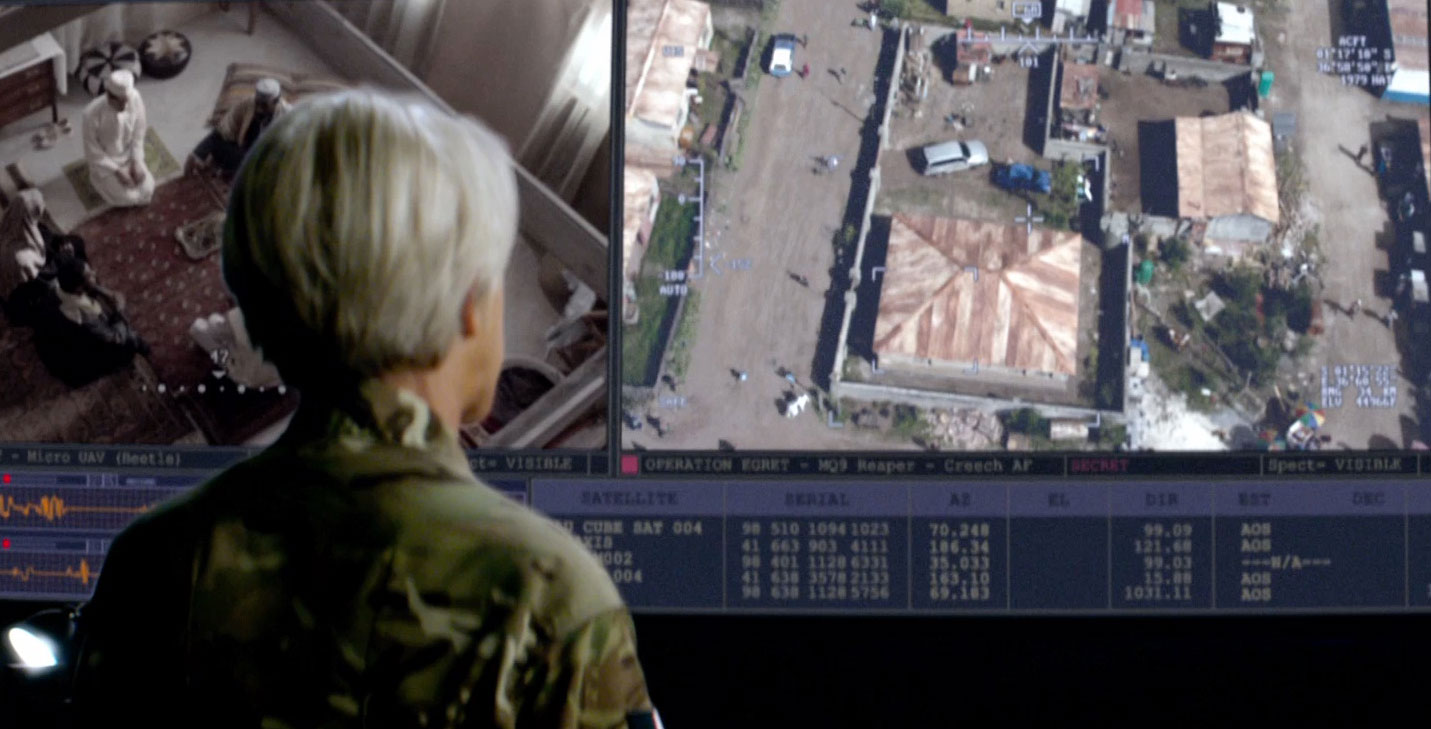 Screenshot from the motion picture

War as propaganda
When a little hula-hoop dancing girl suddenly takes position in front of the house with the purpose of selling bread for her mother everything gets even more complicated. Should the entire operation be aborted because of one girl? In a farce resembling Stanley Kubrick’s Dr. Strangelove the ethical, juridical and political aspects of drone warfare unfold between the firm military commanders and the shaky politicians who constantly shift responsibility and avoid making a final decision.

Frustrated by the lack of action, Colonel Powell states the situation in a basic way: ”We've got two suicide bombers inside that house but no one wants to take responsibility for pulling the trigger.” From the war room, the general, however, brings in a different perspective explaining the war against terror as a propaganda war: “If they kill 80 people, we win the propaganda war. If we kill one child, they do.”

This ‘war on images’ is what the movie is basically about addressing the close link between visuality and war of which the French media scholar Paul Virilio and American visual theorist W.J.T. Mitchell has associated modern warfare. We are now facing a new type of warfare in which the function of the weapon has become the function of the eye.

Lifting the fog of war
What makes Eye in the Sky outstanding compared to other recent drone movies is how accurately it addresses the increased visual technology of modern warfare and the responsibility it entails. For certain, drones have brought more transparency into the battlefield and lifted the ‘fog of war’ – but on the other hand (and for that very reason) they are obliged to actually use it to prevent civilian deaths. For instance, the question of PID (Positive Identification) plays a crucial role in Eye in the Sky – as it was also the case in Tobias Lindholm’s Oscar nominated Krigen. PID is military language for having a confirmed identity of the target in order to know for sure that you are bombing terrorists, not civilians.

The first part of the movie is about gaining this PID information. It is obtained only due to the eyes in the sky that is trough the lenses of the Reaper drone – 22.000 feet above the ground – a smaller bird-size drone and by the tiny robotic insect equipped with a camera. In this part of the film, the field commanders are spellbound to the screen, passively waiting, just like the movie spectators. One could argue that this delaying of action (both on political and cinematic level) is balancing on a fine line between being nail-biting suspense and boredom. Perhaps that is just how it is to wage war remotely.

Estimating Collateral Damage
The second part of the movie is about CDE, another military acronym that stands for Collateral Damage Estimate. When the little girl starts selling bread in front of the house in the blast zone, the drone pilot refuses to obey his order to launch the Hellfire missile. Instead he asks for having the CDE run again which triggers a new cascade of calculations and mortality rates complicating the situation further while the politicians get even more desperate and paralyzed.

What Eye in the Sky explains so well is how the fog of war has lifted by current visual technology; but at the same time how the very same technology produces vast amounts of data, algorithms and calculations almost creating a new fog in terms of hazy information overload. The tragic irony – or the good news, if you like – is that due to our human emotions we are incapable of navigating in this vast information flow and unable to solve the impossible ethical dilemmas it raises.

As the movie is mostly narrated through predominant ‘drone frames’, it finally succeeds with its mission: Transmitting the hopeless remote experience of modern warfare from the war room to the movie theater. Although the scenes with the innocent, hula-hoop dancing child are very close to getting a over the pathos top –as we have seen this motif before in recent drone movies – the film leaves the spectator with an virtual sense of an authentic dilemma; what would you do in this situation? Would you pull the trigger, or would you put one child’s life above 80 potential civilians?