The Astrology of War

Written by Anders Engberg-Pedersen, Associate Professor at Department for the Study of Culture

Today military strategy increasingly relies on big data and algorithms, but for millennia it was informed by astrological interpretations of celestial movements. A glance at a famous moment in the history of military astrology suggests that not all that much has changed.

On September 27/28, 2015 an unusual event took place in the heavens. On those days the moon passed through its perigee, the closest point to the earth, as it is want to do in its elliptical orbit. This time, however, the perigee was synced with the lunar phase in such a way that people looking up at the sky could see a so-called supermoon: a full moon rising in its closest proximity to the earth. Even more unusual, however, was the fact that it suffered a total eclipse. Gradually fading into a bloody red, the supermoon eventually became completely engulfed in the shadow of the earth. It was a rare event. According to NASA, the last supermoon lunar eclipse occurred in 1982. The next one will take place on October 8, 2033.

For the early risers in Europe who managed to crawl out of bed to witness the celestial phenomenon, the motivation was probably an aesthetic event, a chance to behold the beauty of the universe, accompanied, perhaps, by the usual ruminations about the utter insignificance of terrestrial affairs when faced with such sublime grandeur. But this response is of course a distinctly modern one. For millennia celestial events carried the highest significance for human affairs on earth. Among the many areas they were believed to influence, the constellations of the sun, the moon, and the wandering stars had a significant impact on war and military strategy.

Herodotus recounts how the philosopher Thales had predicted a solar eclipse, probably in 585 BC, which brought the battle between the Medes and the Lydians to an end. The soldiers fled the battlefield in terror when, as Herodotus writes, “day was suddenly turned into night.” The military role of the astrologer, or mathematicus, however, was to turn the impact of the celestial influence to the commander’s advantage. Based on the mobile spatial order of the stars and a metaphysical system that endowed the planets and the positions with a detailed set of values and meanings, their task was to predict auspicious and inauspicious moments for military action. As such astrological predictions formed an integral part of military strategy. 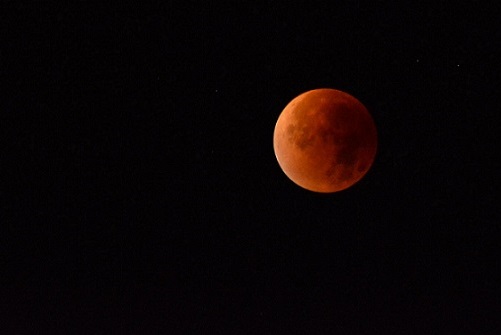 On September 27/28, 2015 an unusual event took place in the heavens: A full moon rising in its closest proximity to the earth. Even more unusual, however, was the fact that it suffered a total eclipse.

But what was the reach of such predictions? To what degree could terrestrial events be predicted from their celestial counterparts? Accompanying the long history of astrology is an at times heated debate about which types of prediction can lay claim to scientific validity. Already in Tetrabiblos from the second century AD, the bible for all things astrological for over a millennium, Ptolemy distinguished between universal or general events on the one hand, and specific or particular events on the other. Is the science of astrology only accurate and valid when it comes to larger tendencies or can it predict concrete events at the level of individuals? A famous moment in this long historical debate is the exchange in the early 17th century between two of the leading figures of the period: Johannes Kepler and Albrecht von Wallenstein.

In 1624, Wallenstein sent a request to Kepler asking for an update of the horoscope Kepler had made for him some years earlier in 1608. Wallenstein, who was soon to be Generalissimus of the Holy Roman Empire, claimed that the events of his life seemed out of sync with the original horoscope. Some of the predicted life events had occurred to early and some too late. Wallenstein now demanded new and very concrete astrological predictions based on a careful recalculation and correction of the horoscope. In particular, he wanted to know how long his military career would last and whether he would be blessed with luck in all his military endeavors. Moreover, Wallenstein believed that the horoscope would even be able to reveal the nationality and profession of his “occulti et publici inimici” for, as he writes, “that can easily be deduced” by skilled astrologers.

Kepler replied a few months later. It wasn’t the response Wallenstein had hoped for. Kepler’s wry letter contains a stern rebuke and a lecture on the limits of the science of astrology. The stars do indeed influence events in the sublunary realm, writes Kepler, but it is mere superstition to believe that it was possible “to predict particular matters and futura contingentia from the skies.”

According to Kepler, the celestial pattern of Wallenstein’s horoscope can only be regarded as an indicator of general trends, but it is beyond the ken of astrology to predict particular events. It is not merely the case that the prediction of future events is precarious and uncertain; the celestial configurations cannot be translated into particular terrestrial events. For Kepler the influence of human will, chance, and political circumstances in the sublunary realm have the greatest sway over human affairs and hinder a direct correlation of star events with terrestrial events. There are simply too many local factors that muddle the picture. While he keeps the metaphysics of the astrological system intact, Kepler goes out of his way to emphasize that astrology cannot provide the strategic information Wallenstein demands.

Wallenstein was the last of the major European commanders who put his faith in the science of astrology. During the Enlightenment astrology was expunged from the scientific curriculum and banished to the field of the occult. Its aim, however, did not disappear with it. In the age of Big Data the means of prediction have certainly changed, but the objective remains the same. A few years ago the Ward Lab at Duke University developed a DARPA funded project that with the aid of a program called CRISP (short for CRISis Prediction) forecasts “rebellion, insurgency, ethnic and religious violence, as well as domestic and international crises” on a monthly basis. Based on an aggregate of eight different predictive models of e.g. economy, demographics, behavior of insurgent groups etc., the model produces an average probability for the onset and intensity of potential conflicts around the world. To each era, its own astrology of war.

It would appear, however, that contemporary algorithms such as CRISP might support not just Kepler’s belief in the validity of general predictions, but also Wallenstein’s claim that a fairly detailed level of particulars can be forecast with a high degree of accuracy. However the tools of prediction develop, the millennial-old debate about the reach and the limits of the prediction will continue unabated, as will the discussion about which version of the prognostic system offers the best forecasts. The end of astrology as the primary tool for the management of the contingent futures of war, however, does signify one major change. When in 2033 we gaze up at the skies, we can take comfort in the fact that the eclipse of the bloody supermoon signifies nothing.