Written by Dea Schou, Ph.D. Student at Department for the study of Culture

Interestingly, an exhibition about martyrdom in the past, present and future is now taking place in a former slaughtering hall in the Meatpacking District in Copenhagen. The atmosphere of the old industrial spaces exudes death, blood and bones, and the white, clinical tiles and raw concrete enveloping the pop up Sort/Hvid (Eng: Black/White) theatre make up a ‘suiting’ murderous staging of the performance.

The old butcher houses in the hip and trendy meat packing district in Vesterbro mainly harbour clubs, bars and restaurants, but these weeks a highly debated art show is adding a more serious layer to the area. The title of the exhibition is “Martyr-Museum”, and the art performance exhibits a range of historical martyrs and questions and examines the concept of “martyrdom”.

The show/museum is curated and created by the 6 people tall theatre troupe “The Other Eye of The Tiger” (TOETT) and is directed by the controversial Danish director Christian Lollike whose plays often provocatively explore contemporary conflicts and crises (for example his much debated play about Anders Breivik).

Already weeks before the opening of the exhibition, the Martyrmuseum has caused headlines in Danish and International newspapers because of the hot-button theme. The Danish Minister of Culture, Bertel Haarder, has publicly criticised the exhibition because it represents present-day Islamist suicide bombers as martyrs, thereby purportedly likening them to heroes and heroines like Socrates and the ‘thoroughly honest socialist Rosa Luxembourg’, as he says in an interview with DR.

He hereby joins other right wing politicians’ critique of the exhibition on the grounds that it includes ‘Islamic terrorists’ in the glorious halls of martyrdom. The show has even provoked a police report from the Danish politician Diego Gugliotta from the governing party “Venstre”, who claims that the exhibition legitimates “terrorism and terrorist acts, when they choose to portray terrorists who have been part of several international terrorist acts as heroes.” Both Haarder and Gugliotta condemn the performance out of moralist reasons, but assumedly none of them have actually seen the show – Bertel Haarder has even claimed that he never wants to set foot in the exhibition.

But maybe they should. Curious about the exhibition both from an artistic and a political angle, I visited the theatre and I was surprised and overwhelmed by the thematic and aesthetic complexity and subtlety of the performance. 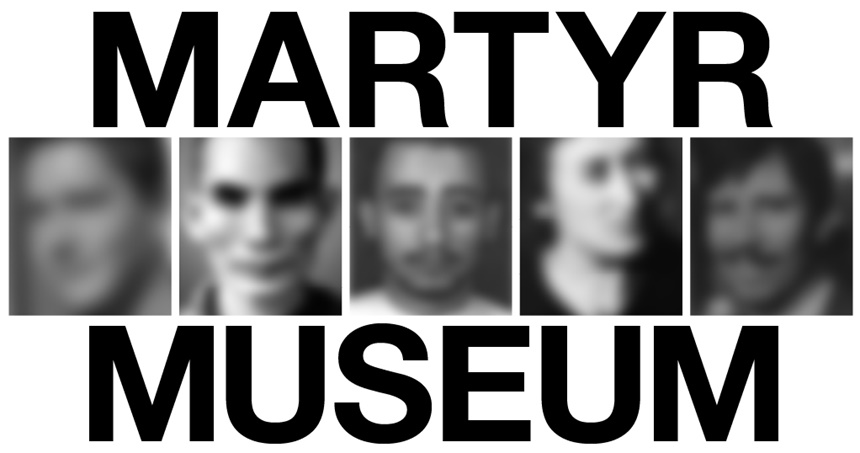 The show is what could be called a “theatre installation” and consists of an exhibition and a guided tour/performance, and you can either visit the show as a ”normal” exhibition (free of charge) or you can book tickets to the tour (60 mins, 125 kr). I would very much recommend to do the guided tour, since this turns out to be a sort of performance art by the guide who is actually an actor (Morten Hee Andersen). Starting out as a classic tour guide with a big hello ‘my name is Morten’ we suddenly find Morten lying on the floor acting out the stoning of the first Christian martyr ‘St. Stefanus’. During the tour he steps in and out of the role as an “expert” tour-guide and as martyrs who he vividly re-enacts with the aid of visual and auditory effects.

The exhibition consists of many diverse installations that present images, texts and reproductions of artefacts connected with the life and death of the specific martyrs. For example, beside the photo of a Japanese kamikaze a lock of hair is shown in a glass case because the Japanese suicide flyers send hair to their families before dying in battle in WW2.

What does 'Martyr' mean?

Contrary to the critique launched by Haarder and Gugliotta, I would say that the exhibition by portraying a lot of different ‘martyrs’ – Jews, Muslims, Christians, Buddhists, freedom fighters, nationalists, politicians, philosophers and scientists – raises the question of what exactly this word means. Hereby the artists invite us on board on an exploration, of what makes people want to die for a higher cause, and more importantly, of the political nature of (and power struggles undergirding) the question of who and what martyrdom is? Even though the main focus of the performance has been to open up the concept of the martyr by confronting it in different ways and by viewing it from different political and religious standpoints, one conclusion seems to be very clear: it is the (political nature of) narrative – and not the martyrs and their actions – that is the primary force in deciding who is and who isn’t martyrs.

The tour is a bodily and multisensory experience where the spectators listen to the guide, watch how he enacts stories from the lives and deaths of the martyrs, and throughout the performance the audience is co-creating the show by functioning as co-actors of the scenes.

Furthermore, our auditory and visual senses are stimulated during the tour by headphones with music and noises and by very strong lighting effects in some of the rooms. When the guide acts out the story about the Catholic martyr Maximilian Kolbe who sacrifices his own life to save a Jew in a KZ-camp, we are cooped up in an old, small cold-storage room bearing associations to gas chambers.

The setting and the atmosphere and our crammed up bodies hereby closely emulate the historical event. In the “Bataclan-installation” the music is turned up in the headphones and the light is flickering like in a club, creating an affective space that brings our bodies disturbingly close to the events in Paris. By constructing personal stories of the martyrs and by letting us, the audience, enter and co-create these stories, Martyrmuseum as a work of art enables a kind of bodily, nonverbal experience of the circumstances and struggles that has caused the different acts (and discussions) of “martyrdom”.

The theatre installation succeeds in examining the concept of “martyrdom” in a very nuanced way by attacking the question from both a theoretical perspective (there are many info boards in the rooms with quotations from researchers), an affective side in the bringing-to-life of personal stories and artistically in creating a multisensory space where the audience are invited to participate.

The name of the theatre “Sort/Hvid” (“Black/White”) can be said to mimic the rather narrow and antagonistic rhetoric operating in the political games of martyrdom: “Good vs. Evil” and “Us vs. Them”. Ironically, the reception and criticism of the exhibition shows that this ‘problem’ – of a political decomplexifying of the complex power struggles of martyrdom – is still present.

Yet, art is exactly not this: simple and dualistic. Rather, it is in the aesthetic practices and performances of an exhibition like “Martyrmuseum” that a fuller and subtler picture of the world (and its power struggles) may be imagined and enacted.  In relation to this, director Christian Lollike says: “One of the tasks of art is to create understanding and sympathy for what we cannot understand – for the uncanny and unpleasant”.[1] This is what art can and must do: engage in contemporary societal questions in order to nuance our understanding of the world by addressing the affective, bodily and messy character of life.

The exhibition closes June 10, so hurry up if you want to watch it before it ends! The guided tours are both in Danish and English.