The US airstrike against a Syrian air force base on April 7 was the first action of the new Donald Trump’s administration to attract widespread support, garnering positive responses even from critics.

From a legal standpoint, this is all the more surprising since the attack was technically an act of aggression against a foreign country and a clear violation of international law.

But the suspected sarin-gas attack against Khan Sheikhun that killed more than 80 civilians has stirred up emotions. Shared outrage may well lead to the emergence of a new norm in international law justifying unilateral military force to sustain the ban against the use of chemical weapons.

No legal justification, but wide support

Under international law, there are only two justifications for the use of force: authorisation by the United Nations Security Council or self-defence.

Neither holds in this case. The UN Security Council has condemned the Bashar al-Assad regime’s use of chemical weapons against civilians but it has not called for an armed response, and most experts consider that attacking Syrian children does not constitute a direct threat to the US or its allies. 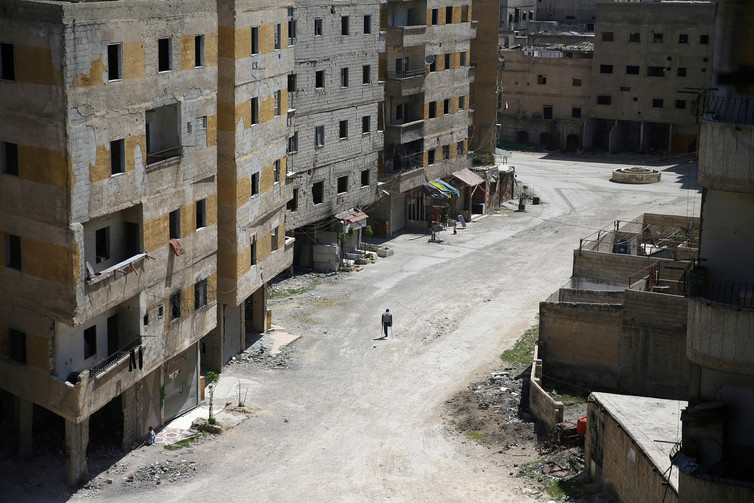 A survivor of a 2013 chemical attack in the Ghouta region of Damascus in Ain Tarma, Syria in 2017. Bassam Khabieh/Reuters

This is a crucial difference from the ongoing US strikes against the Islamic State on Syrian soil, which Washington justifies as support for Iraq’s self-defence.

Despite the absence of legal justification, only Russia and Iran have forcefully spoken out against the US missile attack, branding it illegal. Most world leaders welcomed the air strikes and hailed them as a strong signal in the fight to end the use of chemical weapons.

German chancellor Angela Merkel and French president Francois Hollande issued a joint statement in defense of Trump’s action, and the leaders of countries as diverse as Japan, Turkey, Canada, Saudi Arabia, Poland, Italy and Denmark have all supported it.

According to US Secretary of State Rex Tillerson, Chinese President Xi Jinping also did not condemn the strikes and offered a measure of support by confirming its opposition to the use of chemical weapons.

The heads of the European Union and NATO have both stated their belief that the use of chemical weapons “cannot go unanswered”.

The creation of a new norm

Trump’s strike is thus about more than just “gesture politics”. It represents the creation of a new norm in international law that sanctions the unilateral use of force to punish those who use chemical weapons, especially against civilians.

New international law can be created not only through treaties and declarations but also established by state practice, as long as the behaviour is accepted by other states as legal and justified. This process can take decades.

But the outlines of one new rule have just been defined.

First, any use of force must be directed against targets that are related to the actual use of chemical weapons. The US struck only after it confirmed that sarin had been unleashed on the Syrian people, and targeted its missiles at the base from which the attacking planes had launched. 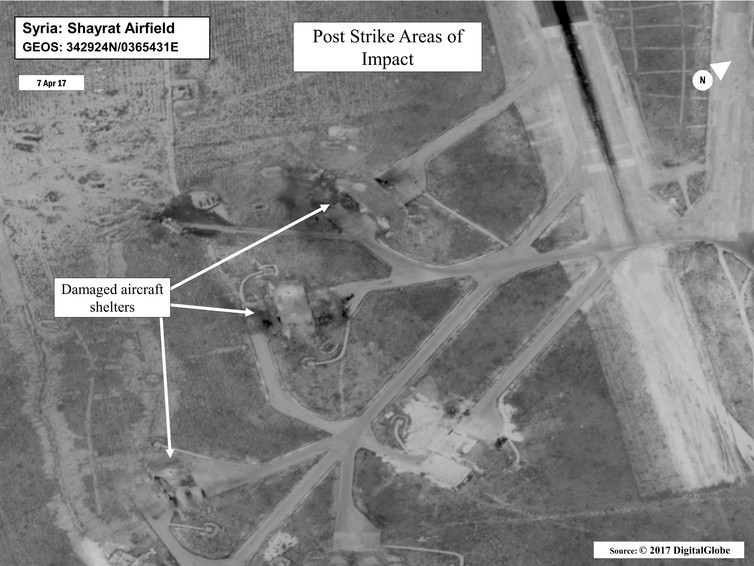 Second, any such counter strike must be designed to minimise civilian casualties. The attack apparently avoided the building suspected to store the chemical weapons, since an explosion there might have caused them to be spread widely, increasing civilian casualties.

To prevent Russian casualties, the US even warned the Russian military of the attack, which almost certainly ensured that the Syrian officers responsible for the gas attack could flee along with their Russian colleagues.

What remains unclear is the scope of this new principle. When, in February 2017, Human Rights Watch reported that the Assad regime had coordinated chlorine-gas attacks against civilians in Aleppo using crude barrel bombs, the news did not trigger a response from the Trump administration.

Images from the Khan Sheikun attack seem to have stirred Trump’s emotions, and there are reports that the heartbroken response of his daughter Ivanka influenced him as well. While it first appeared as if the Trump administration intended to differentiate between sophisticated chemical weapons, such as sarin and military use of industrial chemicals such as chlorine, White House Press Secretary Sean Spicer soon confirmed that the US would use force to punish Assad for any use of chemical weapons.

Chemical weapons must not go unpunished

Whether inspired by Trump’s head or heart, this new logic marks a significant divergence from the previous administration. President Barack Obama shied away from using military force in response to Assad’s first sarin gas attack against civilians in Ghouta in 2013.

At that time, Russian President Vladimir Putin proposed a new international-legal principle: if a state deploys chemical weapons against civilians, it forfeits the right to use them and must destroy its supplies. The Organisation for the Prohibition of Chemical Weapons received the 2013 Nobel Prize for peace for supervising this process in Syria, and Assad was forced to join the Chemical Weapons Convention.

Now that Syria has broken this agreement and again used chemical weapons (which were either hidden from inspectors or freshly produced), Obama’s stance has offered Trump a viable platform for using military force – he can point to Syria’s violation of the convention it signed four years ago.

Still, establishing a new principle is not straightforward. Germany expressed support and understanding for the strikes while stressing that its military would not offer support to similar operations without UN authorisation, as German law bans wars of aggression. 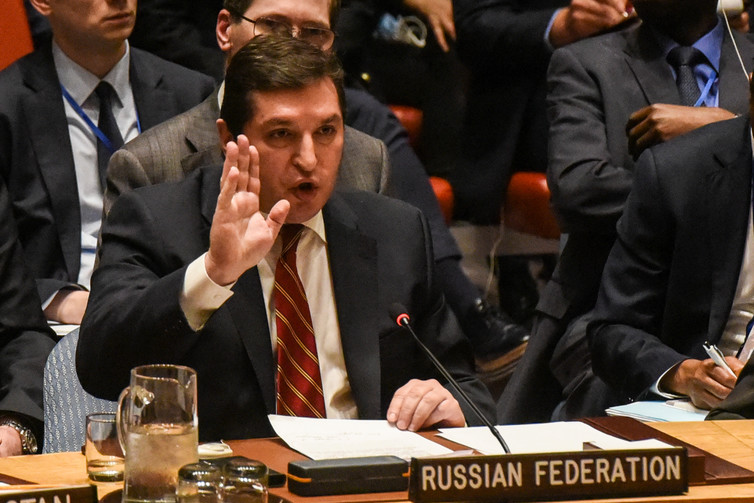 Will Russia now promote its own version of international law and order? Stephanie Keith/Reuters

Russia, meanwhile, has countered the US threat to Assad by stating that it would use armed force in response to further US attacks, whether motivated by the use of chemical weapons or not.

Even the White House has wavered on the reasoning for its missiles. Trump first argued that preventing Assad from using chemical weapons was a “vital national security interest of the United States” (seemingly claiming a form of self-defence) before the White House clarified that the use or proliferation of chemical weapons “should be a concern to every nation”.

The US now sustains that action in Syria was meant to support the new principle that the use of chemical weapons against civilians must not go unpunished, regardless of the UN’s position.

This muddled language is typical of a norm-creation processes in which an action that clearly goes beyond existing law is receiving widespread international support.

Though codification of a new norm can take decades, the principle can become accepted practice long before that. Today, it seems that the consensus against the use of chemical weapons is so universal that states have begun to improvise enforcement rules beyond those included in the Chemical Weapons Convention, which has been signed by every country in the world except Egypt, South Sudan and North Korea.

The development of this new norm means that justification is now available to any country that wishes to unilaterally punish another country for its use of weapons of mass destruction. If successfully established, it would undermine the authority of the UN Security Council.

Many states applauding Trump’s actions today do not actually want that to happen, so it will probably be a long time before the new norm is written down. In the meantime, the US has made it clear that it will continue to invoke it against Assad and others.

This article was originally published on The Conversation. Read the original article.