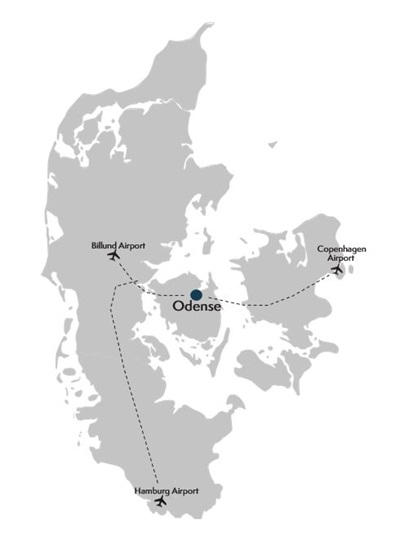 There are three international airports located nearby with easy transfers to Odense.

The first and most popular international airport is located in Copenhagen, 173 kilometres from Odense. The Danish railway system has a direct line to Odense. You can also take a direct bus from the airport to Odense. Several companies offer a bus route to Odense.

The second international airport is located in Billund, 104 kilometres from Odense. It is also possible to take the train or bus directly to Odense from Billund.

The third international airport is located in Hamburg in Germany, with 300 kilometres to Odense. It is possible to take the train or bus directly to Odense from the airport.

Restaurants, cafés, shopping opportunities and cultural attractions will be within walking distance in the city centre of Odense. There is a direct bus line to take you from the centre to the University of Southern Denmark, and additional bus lines can to take you where you need to go in Odense. Bikes and electronic scooters are also available around the city for a small renting fee.

It will be possible to book the hotels with a discount. More information will come later.
We have selected three nice and popular hotels for you to choose between for your stay in Odense:


Hotel Ansgar
Hotel Ansgar is placed in the heart of Odense and invites you into a comfortable and cosy time pocket. The hotel was built more than 100 years ago, in 1895. Today the hotel is decorated in a classical design with more than 74 rooms and a restaurant with a delicious breakfast buffet. The hotel is, as described earlier, located in the city centre, within walking distance of the railway station and many beautiful parks, cafés, shopping, and cultural attractions.

Link to the hotels webpage.
Hotel Plaza Odense
Hotel Plaza is located centrally in the city centre. As well as being one of Odense’s oldest hotels, this hotel is also known for their exquisite breakfast buffet and their á la carte restaurant. Opposite the hotel is the King’s Garden. The hotel is also located within walking distance of the railway station and Odense’s many shopping opportunities, cafés, cultural attractions, and beautiful parks.

Link to the hotels webpage.
Hotel Odeon
Hotel Odeon is a new and modern hotel in the heart of the cosy “Hans Christian Andersen” neighbourhood. The hotel offers an organic breakfast buffet, and you can also get a delicious dinner at the hotel’s own restaurant. Hotel Odeon is centrally located, within walking distance of the railway station, cafés, restaurants, shopping and cultural attractions. It is only a short walk to the River of Odense and all the beautiful parks surrounding it.

Link to the hotels webpage.