American Colors: Across the Disciplinary Spectrum 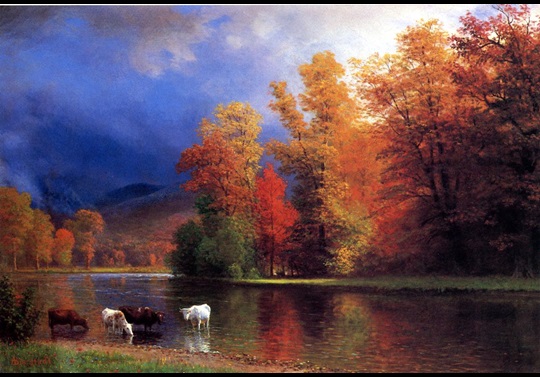 Albert Bierstadt, On the Saco (undated)

Color defines America. First of all color defines America through ideas of slavery, race, and civil rights. W.E.B. Du Bois’ claim that ‘The problem of the Twentieth Century is the problem of the color-line’ is certainly hard to deny in an American context. Yet American Colors are far from all about race. The respective colors of the Democratic and the Republican Party, since 1976 partitioning the country into demographics of blue and red, are significant reminders of the power of American Colors to divide and contrast. On the other hand, American Colors are not necessarily divisive, even if they stay distinct. Whether it is in the color of the rainbow, as seen on the pride flag of the LGBT community, or in the idea of ethnic and racial diversity, the notion of colors mixed as well as existing in diverse unison is key to the idea of America. To this, we can add shades of black and green too. On the one hand, modern America is constructed on, and by, ‘black gold’ (oil). On the other hand, it is precisely due to the success of motorized industry that the ‘green movement’ in its contemporary iteration had its beginnings in America, just as it is the yardstick of any contemporary debate on the gray matters of waste and pollution. As the largest consumer of energy worldwide and with the world’s largest ecological footprint, America is the extreme against which both local and global perspectives of all ‘green’ discourse must necessarily be measured.

The conference calls for—but is not limited to—workshop proposals and papers on American Colors of all kinds, from the color of music (e.g. Blues), to the dark corners of American Gothic and the red gore of American horror, on to the purchasing power of the mighty greenback dollar.

Papers are invited that address, but are not limited to, American Colors in

This conference is sponsored by the Embassy of the United States, Copenhagen, the Fulbright Commission, and the Carlsberg Foundation.

Find out all you need to know on how to get around in Odense and on Campus and much more!