Introduction to research topic: Mechanisms of water and salt transport in fish

Maintenance of a stable internal environment (homeostasis) is a prerequisite for the survival of most organisms, whether living in a terrestrial or aquatic environment. In many organisms, the composition of the internal environment is further threatened by random or periodic fluctuations in the external environment. The internal environment is basically a saline solution, and in order to maintain its composition over time obligatory passive fluxes of water and salt must be counteracted by active regulated fluxes. We use fish as model organisms to gain insight into how water and salt transport is affected by fluctuations in the external environment. Several fish species can tolerate quite large fluctuations in the salt content of their environment. These are the so-called euryhaline fish species to which belong familiar examples such as salmonids (salmon and trout), eel, perch, flounder, sea bass, and Japanese ricefish. In our research we focus on the molecular mechanisms by which water and salt is transported across osmoregulatory epithelia such as the gills, kidney tubules and intestine. Ion-transport proteins, aquaporins and tight junction proteins are examples of such targets for our research. Endocrine control as well as developmental changes of these mechanisms are of particular interest, as they give us clues about how signals in the environment are transduced into adaptive and pre-adaptive changes in the organism.

See the poster here: "Regnbueørredens tilpasning til livet i havet" 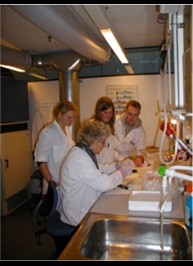 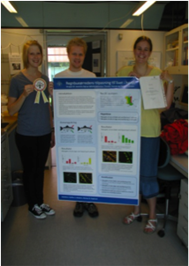 Euryhaline fish use different strategies to acclimate to a changing salinity. Forced development: These fish ‘take up the challenge’ once a changed salinity is registered. This implies a temporary osmotic stress period lasting several days, in which the osmoregulatory organs are re-modelled in order to function in the new condition. Preparatory development: These fish are genetically programmed to initiate the development of hypo- or hyper-osmoregulatory mechanisms in ‘anticipation’ of a changing osmotic environment. The phenomenon is well known as the parr-smolt transformation among migratory salmonids, in which a quite extensive developmental programme is initiated during spring in order to prepare the osmoregulatory mechanisms needed to overcome the challenges in the new environment. Thereby, these fish reduce the osmotic stress experience, when they migrate from fresh- to seawater. It has recently been documented that a ‘reverse’ development – i.e. loss of salt-water osmoregulatory mechanisms occur during the homing migration to the native river. In one aspect of our research, we investigate this ‘anticipatory’ development (pre-adaptation) and in its controlling factors at the level of the gills, the kidney and the intestine.

The gills have a complex 3-dimensional structure with several main cell types. Passive as well as active fluxes of ions occur here. The direction of these fluxes, as well as the osmotic diffusion of water is completely reversed when euryhaline fish change environment from freshwater to seawater or vice versa. Thus the gill is a highly plastic organ. Our emphasis is on how the important ion-transport mechanisms change during such a transition and during the parr-smolt transformation. We are investigating the role, regulation and association of various isoforms of the Na+,K+-ATPase and the regulatory FXYD subunit, the Na+,K+,2Cl--cotransporter and the cystic fibrosis transmembrane regulator (CFTR) during osmotic adjustments. The role of nitric oxide as a modulator of ion transport is a recent focus of our research. In a collaborative project with Dr. Christian K. Tipsmark (Univ. of Arkansas), we are also investigating the localisation and functional properties of tight junction proteins in the gill epithelium.

Functionality of the teleost fish kidney has not received much research effort, compared to the gills. The main function of the filtrating fish kidney is excretion of large amounts of hypo-tonic urine in the freshwater condition and is greatly reduced to largely being a divalent ion secretory device in the seawater condition. The fish kidney has a “messy” structure with nephrons and glomeruli interwoven among each other. We are investigating the cellular and subcellular localisation and expression of different ion-transport proteins and newly discovered isoforms of aquaporins in the fish kidney. Our understanding of the role of aquaporin molecules in the fish kidney is very limited and it is our immediate goal to map the expression of AQP isoforms -1a, -1b, -8ab, and 8bb in the different segments of the nephron. In a newly initiated project we are addressing the mechanisms of water transport in the aglomerular kidney of the Gulf Toadfish. Aglomerular kidneys are found in a few groups of teleosts - mostly marine species - and are viewed as specialized versions of the teleost kidney, where glomeruli and thus filtration is completely absent and urine production relies on tubular secretion of water and solutes. The project is in collaboration with Prof. Martin Grosell, Univ. Miami.

The intestine
In addition to being the nutrient absorbing organ, the intestine in euryhaline fish has an important role as a water absorbing organ under seawater conditions. In seawater, fish are currently dehydrated by the osmotic loss of water to the environment, and this is compensated by active drinking of salt water. However, since water molecules cannot be absorbed unless a favorable osmotic gradient is established, salt first has to be actively pumped across the intestinal epithelium. It is well-known that the intestine is able to absorb water by such a mechanism; however, the molecular pathways for water transport are not established. We are investigating the presence and regulation of aquaporin molecules in enterocytic cells as a prerequisite for trans-cellular water transport. We are particularly interested in the contribution of the pyloric caecae attached to the anterior intestine due to their large expansion of the intestinal surface area. In collaboration with Dr. Birgitte Mønster Christensen (Aarhus University) we are investigating the subcellular localisation of AQPs in the intestine. One of the ongoing projects is concerned with the mechanism of water transport in the intestine of sexually mature 3-spined Stickleback. During sexual maturation, males of this species start producing a sticky protein in their kidneys. This protein, spiggin, is to be used as a glue for nest-building. The production of spiggin completely changes the physiological function of the kidney, which now becomes strongly compromised in its function as a water-secreting organ. In this situation the intestine takes over and develops an ability to secrete water in order to maintain osmotic homeostasis. We are investigating the changes that occur during maturation, and aim at proposing a working model for intestinal water secretion, which has never been seen in any other fish. 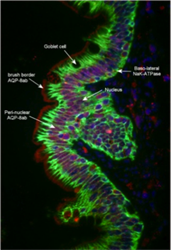